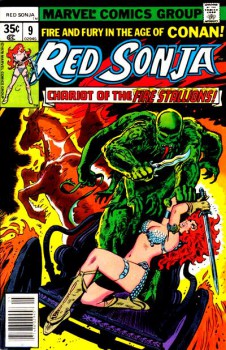 I really don’t want to be “that guy.” Long-time comic fans know “that guy.” The one who can say with authority whether the Batmobile is stick or automatic, how Wonder Woman can find her invisible jet, and who would win in the oldest comic grudge match: Superman or the Hulk. I don’t want to be one of those fans who tells the writer that he’s writing his characters wrong.

But I’ve been following Red Sonja for a while and I think I have a feel for how she thinks, what she values. I come back every month to follow her adventures partially because I like how she handles said adventures. So when I read a story that just goes against so much of what’s been established up to this point, it just pulls me out of the tenuous suspension of disbelief I have to enter to take any of this seriously.

When the story opens and Red Sonja is having dinner with Suumaro, a man who openly keeps a harem of a chained women, something doesn’t ring true. She set them free last issue; but there’s no mention of what happened to them. She should be helping them escape from their indifferent master or, better yet, training them into a fighting force that can exact revenge. At the very least, she should run her sword through this Tarzan wannabe.

As it is, she excuses herself from the meal to go into the nearby woods and sleep in a tree. Hey, who doesn’t have to get away from it all once in a while? After drowning one of Suumaro’s generals in mammoth innards last issue, she’s now taken over his post. The rigors of command are no doubt getting to her; but honestly, why does she want to work for this creep?

Sure enough, she’s not dozing for half a page before the jerk comes trolling after her. She jumps off the limb and he moves to embrace her. She pushes him away, explaining that she’s made a vow, which I have to believe is her way of being polite. I have no idea why she’s trying to be polite to this guy.

Well, it’s wasted effort anyway, because two panels later, he’s grabbing at her again, saying, “I’m a man accustomed to getting what he wants!”

Apparently, those are the magic words, because Sonja’s finally got her sword drawn and is ready to slice herself a misogynist pig. But Suumaro refuses to raise a weapon against her. He implies it’s because he cares so deeply for her; but my guess is that it has more to do with the fact he knows he’d lose. Not that it matters, because his mother, Apah Alah, appears, ready to defend her son with more crazy magic.

Before Suumaro can do anything, his mother causes the vines of the forest to come alive, wrapping themselves around his limbs and pulling him to the ground as a hypnotized Sonja is led away. Apah Alah uses her magic to transport herself and Sonja down deep inside the earth to her lair. Among the noteworthy items in her underground lair are a lava pit and “a pair of massive hellish doors.”

Oh, and Amparo. The demon that lives behind the aforementioned hellish doors. Nine arms. Two faces. He also refers to himself in the third-person, which is usually a sign of madness; but maybe it’s grammatically correct if you have two faces, one always referring to the other.

The fight goes badly for Sonja. The demon actually lifts her off the ground by her hair and throws her across the room. I’m not even sure if that’s possible. Wouldn’t your hair just get torn out? Either way, ouch.

And that’s the point at which Apah Alah reprimands the demon. After all, she didn’t bring Sonja deep beneath the earth to be a sacrifice for a demon. That would be stupid.

She wants the demon to beat Red Sonja in a chariot race.

If you want to take a minute, get a drink, the review will still be here when you get back.

Apah Alah has been training a nine-armed demon to race chariots so that he can beat Sonja in such a contest. Sonja has never driven a chariot and admits as much. Why does the sorceress want to see Red Sonja beaten in a contest instead of just killed? We’re never told. Why a chariot race, of all things? We’re never told.

The She-Devil with a Sword is nothing if not adaptable, though, so she gets into her chariot and the race begins. Oh, and the race is set around the volcanic pit, so that if either of them veers too far off course, it’s molten death. Well, two panels into the race and the demon is cheating, using his chariot to ram into Sonja’s chariot and I’m pretty sure I’ve seen this movie. She’s appalled that a demon would cheat and jumps off her chariot and onto the demon’s ride.

As she leaps, we see her chariot veering off-course, the horses no doubt racing into the lava. Let us take a moment to lament two more equine deaths in these pages.

Sword drawn, Sonja goes back to her original plan of stabbing the demon to death. And we get a thing of beautiful madness.

Red Sonja cuts off limb after limb after limb (nine arms, remember), but the demon neither bleeds nor lets up in his attack. And the chariot is still racing around the lava pit. And all she wanted to do was sleep in a tree.

After running out of limbs to sever, she finally slices the demon’s torso in half, then kicks all of the parts out the back of the chariot like so many McDonald’s wrappers on the highway. Unfortunately, the horses have gone mad with fear and are turning towards the lava pit. There’s no hope of Sonja reining them back on course, so she opts instead to jump the volcano.

I know what you’re thinking, but trust me, Red Sonja jumped that trope long before now.

Halfway across, the horses transform into flaming steeds that fly the remaining distance, only extinguishing when their feet are safely back on the ground. Perhaps our heroine thinks it’s a miracle for a moment, but then she realizes that Suumaro has used some magic of his own to thwart his mother’s scheme. A magic carpet appears and wraps itself around Sonja; but rather than flying her to safety, it teleports her back to Suumaro’s tent.

That’s right. Suumaro is an exiled king with magic powers, six-pack abs, and massive crush on our Hyrkanian hero. He’s just saved her life. He wants to share his life with her.

Red Sonja’s reaction? She asks for a cool shade to sleep in. Alone.

And I feel a little better. Not as good as if she’d run him through with her sword, but I’ll be fine until next issue.

(And for the record: automatic; it’s transparent, not invisible; Superman.)