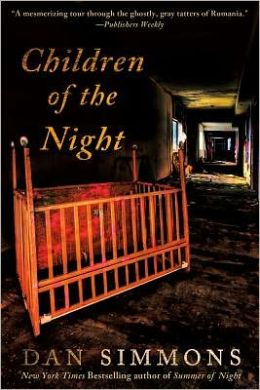 Dan Simmons wrote two of my favorite horror novels, Carrion Comfort and Summer of Night, and the audio version of his novel, The Terror, kept me riveted for many weeks during the long winter commute between Champaign and St. Charles last year. When Simmons talks horror, I listen.

Children of the Night was originally published in 1992, when Communist states were collapsing all across Europe and the airwaves were filled with stories of the desperate last days of Communist dictators. Romania, home to the classic fears of Transylvania, became synonymous with horror of a very different kind when western film crews entered bleak Romanian orphanages to expose the cruelty and neglect there. In Children of the Night, Simmons married modern horror and a far more ancient terror:

In a desolate orphanage in post-Communist Romania, a desperately ill infant is given the wrong blood transfusion — and flourishes rather than dies. For immunologist Kate Neuman, the infant’s immune system may hold the key to cure cancer and AIDS. Kate adopts the baby and takes him home to the States. But baby Joshua holds a link to an ancient clan and their legendary leader — Vlad Tşepeş, the original Dracula – whose agents kidnap the child. Against impossible odds and vicious enemies– both human and vampire – Kate and her ally, Father Mike O’Rourke, steal into Romania to get her baby back.

Children of the Night was published on December 11, 2012 by St. Martin’s Griffin. It is 464 pages in trade paperback, priced at $15.99 ($9.99 for the digital edition), and this edition features a brand new introduction by the author.