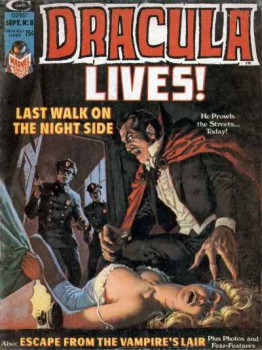 Dracula Lives was Marvel’s companion black and white companion title to the award-winning Tomb of Dracula monthly comic. As a magazine, Dracula Lives was exempt from the strictures of the Comic Code Authority, allowing for more violence and adult themes than would have been possible in the comic at the time.

Issue #8 gets underway with Doug Moench’s “Last Walk on the Night Side,” a two-part gritty urban police drama with a cop on the verge of retirement who runs afoul of Dracula. The shock ending, where the officer returns home to discover Dracula has taken his revenge on him by attacking his wife is startling. Tony DeZuniga’s artwork is first-rate throughout.

Chris Claremont’s “Child of the Storm” is a lengthy text piece. I had forgotten how these were such a fixture of the magazine. Dracula works surprisingly well as a pulp character and these stories prove that the thread between pulps and comics runs deeper than superheroes.

The fourth chapter of Roy Thomas and Dick Giordano’s faithful adaptation of Bram Stoker’s classic rounds out the issue. This chapter has the infamous portrayal of Dracula as a baby snatcher who feeds the stolen infant to his blood-starved wives with the promise they can have Harker once he is finished with him. Jonathan makes a valiant, but unsuccessful, effort to slay Dracula while he sleeps in his coffin during the day. The chapter ends with Harker despairing that he has failed to prevent the plague of the vampire from spreading to England. He knows he will never see his beloved Mina again as he awaits the fall of night, not knowing if this is the night he will meet his death at the hands of Dracula’s brides. 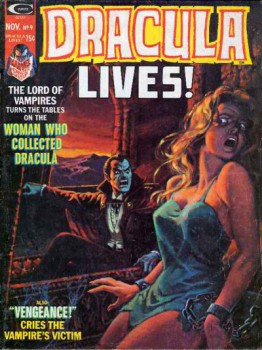 Issue #9 opens with another short comic feature from Tony Isabella on vampire folklore before the main feature, “The Lady Who Collected Dracula,” the second part of Doug Moench’s police drama, is unveiled. Frank Robbins and Frank Springer take up the art chores from Tony DeZuniga. The art is highly stylized, but lacks the realism that DeZuniga brought to the first half of the story. Along with the artwork not matching, the script for the conclusion appears to have been hastily written and is not up to the standard of “Last Walk on the Night Side.” The result is, regrettably, disappointing.

Moench encores with “Scarlet in Glory,” another contemporary tale, this time of a victim’s husband, who baits a trap for the vampire. The Eastern European setting is unusual for a contemporary story, but the result would have benefited from expansion as it appears too rushed to be satisfying. Paul Gulacy is an excellent artist, but as with Jim Starlin in an earlier issue, his work here is not up to his usual standard. Likely these assignments came with challenging deadlines that did not provide the writer or artist with ample time to deliver quality work.

Gerry Conway’s “A Night in the Unlife” benefits greatly from Alfredo Alcala’s superb artwork. This is a curious tale of small town America, with Dracula as the agent of fate touching the lives of various characters. While a minor story, it is well-written and the art does much to add to its appeal.

Conway encores with “Twice Dies the Vampire,” another tale with Dracula turned from predator to prey. This one is set in Madrid in 1903. Sonny Trinidad’s artwork is very good throughout. Conway’s story is an excellent one, with the identity of the vampire hunter who kills Dracula twice during two thrilling encounters coming as an unexpected shock. This is a very well-written story that rivals Marv Wolfman’s acclaimed work in the monthly series. 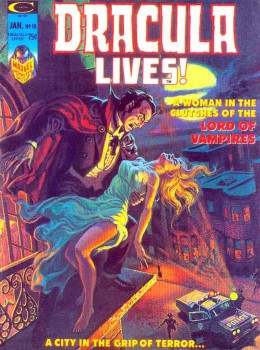 Issue #10 kicks off with Part One of Doug Moench’s “The Pit of Death,” an excellent tale set within Castle Dracula at the start of the Nineteenth Century. Tony DeZuniga delivers his usual excellent artwork. This is an exciting variation on incidents from Stoker’s novel that leaves readers with a nail-biting climax.

Part Five of Thomas and Giordano’s adaptation of Stoker’s Dracula shifts the action from Transylvania to England and introduces us to Mina Murray and Lucy Westenra. This installment is highlighted by the ill-fated voyage of the Demeter from Eastern Europe to Britain.

Steve Gerber’s “The Blood Book” is a solo adventure for Lilith, the Daughter of Dracula and was likely originally intended for Vampire Tales, another Marvel horror magazine. This is a critical story of Lilith’s possession of Greenwich Village hippie, Angel O’Hara, and the tumultuous events in Angel’s life culminating in the news that she is pregnant. The storyline ties in directly with the monthly Tomb of Dracula comic book.

A very brief tale, “A Vampire Stalks Melrose Abbey” concludes the issue. It has no connection with the series and is unsigned by writer or artist, but is believed to be the work of Doug Moench and artist Win Mortimer. This is a minor filler story and is of no real consequence. 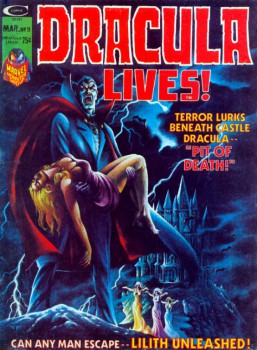 Issue #11 gets underway with “Agent of Hell,” the exciting conclusion to Moench and DeZuniga’s “The Pit of Death.” This one comes off perfect and manages to avoid imitating Stoker, while building on themes from the novel. The shock ending sees the hero fall prey to Dracula only for the vampire to discover he had staked Dracula’s brides and arranged them to form a human cross to ward off the vampire.

Another brief tale, “The Vampire of Mednegna,” follows. Again, this filler story has no connection with the series, although Moench and Mortimer are credited this time out.

Part Six of Thomas and Giordano’s adaptation of Stoker’s novel sees Lucy fall prey to Dracula at Whitby, while introducing Dr. Seward and the madman Renfield to readers.

Steve Gerber’s “Nobody Anybody Knows” is another solo adventure of Lilith, the Daughter of Dracula. Gerber is an exceptional writer and delivers a story that both advances the continuing storyline for Lilith and her human host, Angel O’Hara, while also providing a self-contained secondary story that moves to the fore concerning a murderer who provides Lilith an opportunity to feed as well as mete out justice. Pablo Marcos’s art is up to his usual consistent standard. 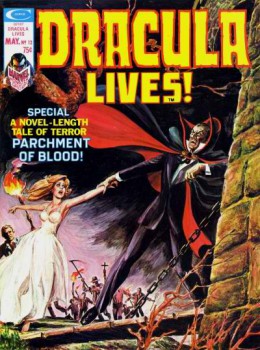 Issue #12 opens with Doug Moench and Sonny Trinidad’s excellent historical tale, “Parchments of the Damned.” Set in Sixteenth Century Transylvania, this epic three-part story is complete in one issue. The tale of a man who steals Dracula’s diary and the terrible fate that befalls him is a compelling one with nice continuity provided to Stoker’s novel in a neat epilogue.

Gerry Conway’s “The Sins of the Father” concludes the issue with another strong historical tale of Dracula’s early years as a vampire in Fifteenth Century Transylvania. Tom Sutton’s artwork is excellent and Conway’s script concerns the beginning of the Van Helsing family’s conflict with the vampire. Once again, the title demonstrates its strength in linking the historical Vlad Tepes with Stoker’s vampire count. 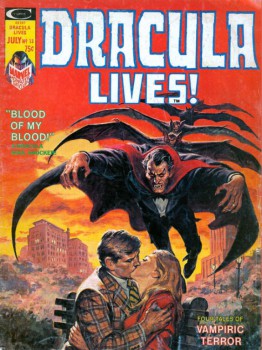 Issue #13 is the last issue to feature original material and kicks off with Tony Isabella’s offbeat western, “A Bounty for a Vampire,” with the usual strong support from Tony DeZuniga’s artwork. Some of the art is so realistic as to appear to be photographic at times. Isabella’s story gives you an idea of what a Sergio Leone Dracula film might have been like. The result is quirky, but very entertaining.

Rick Margopolous’s “Bloody Mary” is a contemporary tale of reincarnation. George Tuska’s artwork is only average here, regrettably. I was not familiar with Margopolous’s work, but the script is solid. A pity he didn’t have more opportunities to write for the character.

Artist Tom Sutton is given the chance to do double duty as writer and artist with “The Toad.” This is a peculiar filler tale with no connection to the series or even vampires. It is a curious horror tale of a deformed boy taunted by his classmates.

Gerry Conway delivers one last excellent tale of the historical Dracula with “Blood of My Blood.” The magazine’s efforts to fill in the gaps in Dracula’s chronology were its strongest point. I was not familiar with the artist for the story, but Steve Gan acquitted himself well. It’s a pity there weren’t more opportunities for him to work with the character. 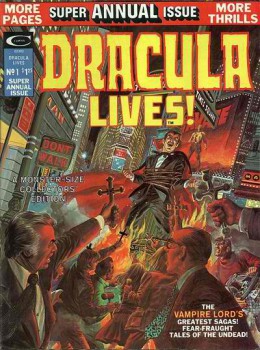 The final issue of Dracula Lives was an annual consisting wholly of reprints. Kicking off with Tony Isabella’s brief “How to Ward Off a Vampire” feature from Issue #9, the annual reprinted half a dozen stories chronicling the vampire’s origins from Marv Wolfman and Neal Adams’ seminal “That Dracula May Live Again” and Wolfman and John Buscema’s “Lord of Death, Lord of Hell” to Gerry Conway and Vicente Alcazar’s “Look Homeward, Vampire;” Roy Thomas’s Solomon Kane crossover, “Castle of the Undead;” Gerry Conway’s Cagliostro story “A Duel of Demons;” and Tony Isabella, John Buscema, and Pablo Marcos’ sequel, “Shadows over Versailles.”

For two years, Marvel’s black & white non-Comics Code-approved magazine offered readers a more mature depiction of the vampire’s past, as well as his present in the form of this companion to the award-winning monthly comic series. Marvel has made several attempts to revive the series over the ensuing decades, but few matched the standard of quality they achieved with this classic horror property in the 1970s.