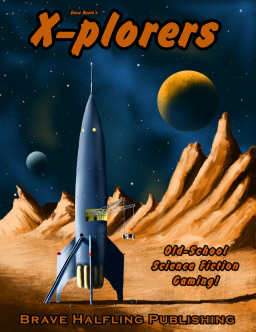 I have to admit I’ve been generally disappointed with science fiction role playing games. It’s true that I’ve discovered some recent gems — especially Ashen Stars and Rogue Trader — but I don’t really get to game much these days, so they’re mostly of academic interest.

You know what would have been great? Discovering a fast-paced, easy-to-learn science fiction RPG when I was still gaming every weekend. One that captured the spirit of 1950s sci-fi, when space exploration meant wide-eyed explorers stepping gingerly out onto mist-shrouded planets, clutching futuristic sidearms and highly unreliable sensing equipment.

I’m talking about the science fiction of Forbidden Planet and Planet of Vampires, where every alien landscape concealed ancient secrets, unknowably strange artifacts of long-dead races, and sinister lifeforms. When an alien encounter meant checking first to make sure the safety was off.

A key feature to this ideal science fiction game, of course, would be that it’s rules-light. Something you and your friends could learn in an afternoon at most, and be deep into your first encounter with space vampires on the rings of Saturn before the evening news.

Believe it or not, at long last my ideal science fiction role playing game seems to have finally arrived: X-plorers, from Brave Halfling Publications. X-plorers celebrates the spirit of pulp science fiction in all the best ways, and it unapologetically embraces those things that made it great, including robots, space pirates, and aliens with tentacles.

There’s even an entry in the Sample Creatures section for Vampire Moths. You see? That’s what I’m talking about.

And yes, it’s a very quick read — about 25 pages of core rules. The chapter on Playing the Game is shorter than the Equipment chapter. These guys know how to write a rulebook.

X-Plorers was written in 2009 by David Bezio, and first published by Brave Halfing in 2011. I have no idea why I haven’t seen it before now, but I’m glad I spotted it on the New Arrivals shelf of my local game store when I did. It is 40 pages, professionally illustrated, and priced at $12.95; a PDF version is available for $5.95. Complete details at the Brave Halfling website.

Oh my, this looks magnificent, especially after reading the Giant Anthology of Science Fiction recently.

If you want more inspirational reading:

I was sold at the cover. I’m trying to get my playing group to give Ashen Stars a try but if that falls short I’ll try this. For $5.95 you can’t go wrong. They even have a FREE version if you are still a bit squeemish about forking over six bucks. It is the price of a latte!

I found the rules simple and fut fun. Ashen Stars will have a learning curve for my group but these rules are very easy. Giant robots, 50s style Cold War rockets, and bug eyed aliens needing a beat down. The writers wrote it on the idea of what if RPGs had gone science fiction instead of fantasy. I thought it was clever.

>Oh my, this looks magnificent, especially after reading the Giant Anthology of Science Fiction recently.

> If you want more inspirational reading…

Now that is interesting. I admit I’m not familiar with Harold Leland Goodwin, but a trip to Wikipedia tells me he was a NASA scientist who wrote YA SF in the 50s. Rip Foster Rides the Gray Planet was originally published by Racine in hardcover in 1952.

Free is a pretty good price for a slice of classic 50s SF. Thanks for the tip!

> The writers wrote it on the idea of what if RPGs had gone science fiction instead of fantasy. I thought it was clever.

Indeed! It’s a terrific premise all around, and it immediately set my imagination spinning. What if those fast-paced Gary Gygax modules of my youth had been inspired by pulp SF instead of sword & sorcery?

I have no idea if X-plorers will see any additional supplements or adventures, but I’d love to see where they go with the concept.