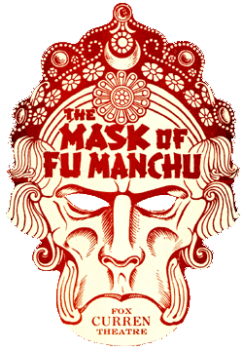 Sax Rohmer’s The Mask of Fu Manchu was originally serialized in Collier’s from May 7 to July 23, 1932. It was published in book form later that year by Doubleday in the US and the following year by Cassell in the UK. It became the most successful book in the series thanks to MGM’s cult classic film version starring Boris Karloff and Myrna Loy that made it into theaters later that same year.

The third part of the book sees Sir Denis Nayland Smith, Dr. Petrie, Sir Lionel Barton, and Shan Greville make their way to the Great Pyramid where Sir Lionel will hand over the relics of El Mokanna to Dr. Fu Manchu in exchange for the release of his niece, Rima, who is being held hostage. Sixty Egyptian police officers are employed to surround the Great Pyramid in an effort to bring Fu Manchu to justice and to aid the others in the event they are walking into a trap. Sir Denis insists that Petrie and Barton stay behind while he and Greville make their way to the King’s Chamber, the arranged meeting place.

Rohmer wrings every last bit of suspense from Smith and Greville’s descent into the King’s Chamber. Having actually made the journey himself prior to writing the book enabled him to perfectly capture the claustrophobic anxiety of his heroes’ predicament. Upon arriving in the King’s Chamber, they find Dr. Fu Manchu awaiting them. The fact that he handles the matter in person without any bodyguards emphasizes the new strength and confidence with which Rohmer has imbued the character now that he has at last perfected the elixir vitae.

Of course, the most important quality to Fu Manchu is integrity and, as always, he is a man of his word. He hands over Rima, unharmed, and allows them to leave with her while he takes possession of the relics. Sir Lionel is relieved to find his niece safely returned and is elated at the thought of Fu Manchu alone and surrounded, but Sir Denis knows only too well that they have no hope of capturing him. 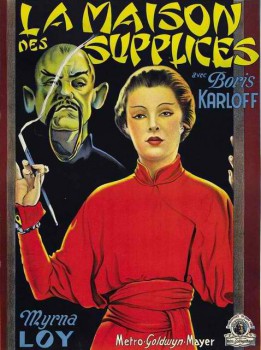 While Smith, Barton, and the police conduct a thorough search of the King’s Chamber for some sign of a secret passage, Petrie and Greville are intimidated by a crowd of dervishes who have gathered outside the Great Pyramid. Just as Smith and Barton emerge from their fruitless search, the crowd begins chanting and they witness an apparition of El Mokanna, seemingly reborn, standing aloft the Great Pyramid amid a glowing ray of light. News of the inexplicable miracle quickly reaches the newspapers in the following days. The rest know the truth that Fu Manchu is behind the religious apparition, but are unable to disprove what so many foreign and native eyes witnessed that fateful day as the fervor over the Mokanna’s rebirth grows.

Smith goes ahead to Damascus with the RAF while Petrie, Barton, and Greville accompany Rima to Cairo, where she is to board a ship to take her safely back to England, where she and Shan are to wed. Smith cables his friends that Fu Manchu is on his way from Damascus to Cairo to reckon with Barton personally. Sir Denis joins them briefly in Cairo to see Sir Lionel, Rima, and Shan off while he and Petrie remain behind.

Sir Denis explains that he arrived in Damascus in time to infiltrate the meeting of dervishes. Fu Manchu attended in the guise of El Mokanna, but put off his test of authenticity until a later date in Mecca. This action has caused much doubt among the Mokanna’s followers that the new imam is actually the reincarnation of the False Prophet. Smith demands that Barton reveal the truth as to why Fu Manchu failed to be crowned in Damascus as planned. Sir Lionel concedes that he handed over forgeries of the true relics to the Devil Doctor in exchange for Rima’s life.

Sir Denis makes a thorough search of the passenger list, fearing Fu Manchu or a servant is already on board their ship before they set sail. Barton is insistent on taking the authentic relics with him, which he carefully hides in Greville’s cabin while they entrust the purser with the empty cases in which the relics were brought aboard. The third part of the novel concludes with the reader waiting with bated breath for disaster to strike. Sir Lionel Barton’s boundless ego has resulted in a setback for Dr. Fu Manchu that the Devil Doctor will not easily forget. All of Sir Denis and Sir Lionel’s precautions are doomed to come to naught when Fu Manchu retrieves the relics of El Mokanna to realize his destiny in leading an uprising in the Middle East against the British Empire, as we shall see in the conclusion of Sax Rohmer’s The Mask of Fu Manchu in next week’s article.