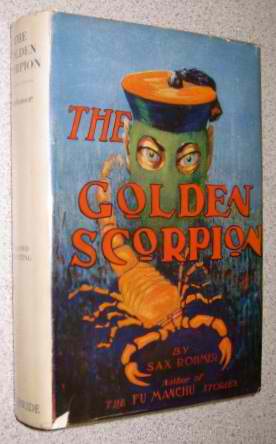 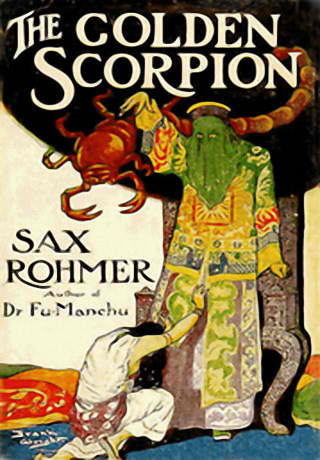 Sax Rohmer’s The Golden Scorpion was first printed in its entirety in The Illustrated London News Christmas Number in December 1918. It was published in book form in the UK the following year by Methuen and in the US in 1920 by McBride & Nast. Rohmer divided the novel into four sections which is how we shall examine the book over the next four weeks. “The Cowled Man” is the title Rohmer selected for the first part of the book and comprises the first eleven chapters.

Despite featuring several characters from Rohmer’s 1915 novel, The Yellow Claw, The Golden Scorpion marked a return to the style and feel of Rohmer’s Fu-Manchu thrillers which had concluded the previous year with the publication of The Si-Fan Mysteries (1917). Rohmer maintained the more realistic Limehouse crime novel approach of The Yellow Claw for his contemporaneous Red Kerry detective series which started with Dope (1919), but chose to fashion The Golden Scorpion from the same Yellow Peril weird menace cloth that made his reputation as an author. The key difference from the Fu-Manchu thrillers is that Rohmer maintains a third person narrative voice (as he had in The Yellow Claw) rather than recreating the frantic paranoia that marked Dr. Petrie’s first person narratives. 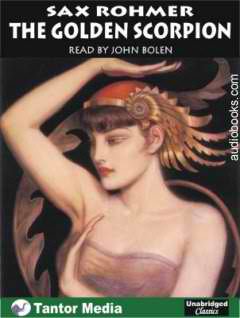 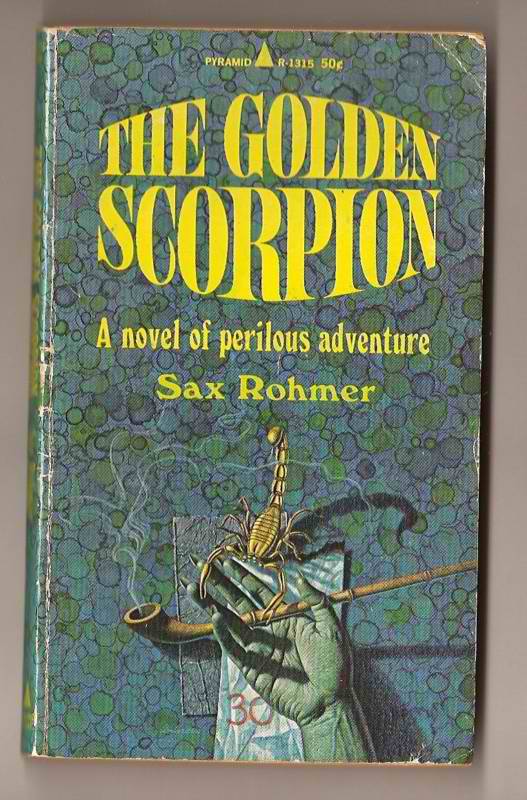 Dr. Keppel Stuart, the principal character in the book, makes a nice stand-in for Petrie. The good doctor is awakened in his bed one night by the sound of someone in his downstairs study. Investigating, he finds an intruder has been searching through his papers and glimpses the mysterious figure of a cowled man who disappears into thin air before his disbelieving eyes. The next morning Stuart’s motherly landlady, Mrs. M’Gregor warns him against his latest patient, the wealthy and exotic Mademoiselle Dorian, with whom the young doctor is quite smitten. The kind-hearted Scotswoman has a premonition that no good will come of the bachelor doctor associating with this exotic beauty. Naturally, being a Rohmer novel, Mademoiselle Dorian is a seductive Eurasian with traces of both Egyptian and French blood in her veins.

Before long, Inspector Dunbar of Scotland Yard turns up to consult with Dr. Stuart about a rare piece he has found on a murdered man fished out of the Thames. The piece in question is the gold likeness of a scorpion tail. The Inspector is curious if Stuart has knowledge of an Eastern cult of scorpion worshippers. He hasn’t, but the doctor recalls a strange encounter with a veiled man known as the Scorpion he chanced upon while in China five years earlier. The veiled man was feared by the Chinese villagers, but they would not speak of the man to a foreigner.

The Inspector informs Stuart that the Surete had alerted Scotland Yard six months ago to be wary of anything to do with a scorpion and more recently suggested that the sudden death of the eminent surgeon, Sir Frank Narcombe was somehow connected to this scorpion mystery as well. Nothing had turned up until a golden scorpion tail was found sewn in the lining of the murdered man’s coat. Scotland Yard has identified the corpse as the Surete’s celebrated criminologist Gaston Max who was investigating this scorpion mystery in London without Scotland Yard’s knowledge for the past month. 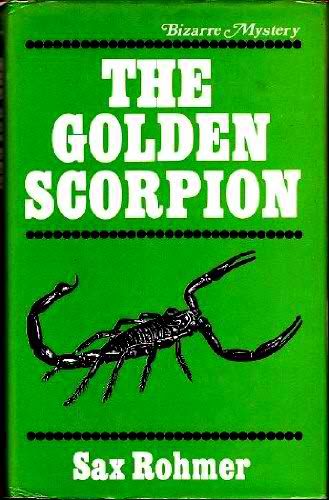 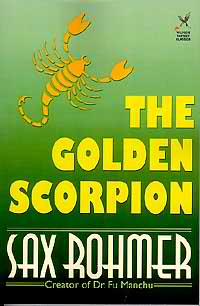 While Dr. Stuart agrees to assist Inspector Dunbar on his case, Mrs. M’Gregor shows Mademoiselle Dorian into the doctor’s study to wait for him. Left alone, Mademoiselle Dorian rifles through the doctor’s files and is shocked when she discovers the scorpion tail. She quickly makes a telephone call identifying herself as Miska and reports what she has discovered. Hanging up, she throws a sealed envelope she took from the doctor’s files into the hearth to burn when she is interrupted by Dr. Stuart.
Keppel holds her against her will and questions her, correctly guessing that she is involved with the cowled man who broke into his study, the golden scorpion’s tail, and the death of Sir Frank Narcombe. Warning him that this knowledge has endangered his life, Mademoiselle Dorian breaks free and escapes his clutches. It is obvious to readers of the Fu-Manchu thrillers that Miska and Dr. Stuart are thinly disguised variations of Karamaneh and Dr. Petrie.

As Stuart tells Dunbar the whole story, the reader learns the mystery actually began a few days earlier when the doctor befriended a taxi driver who entrusted him with a sealed envelope that a passenger left behind in his cab. The driver leaves the envelope with the doctor for safekeeping hoping to reclaim it in exchange for a reward when the passenger contacts the depot. This was the same sealed envelope that Mademoiselle Dorian threw into the hearth before Stuart hastily retrieved it. Eagerly, Dunbar breaks the seal only to discover nothing but a small cardboard square free of any markings inside the envelope. Stuart informs the Inspector that the seal is the imprint of a Chinese coin. When he reaches into his collection to show Dunbar proof he finds a strip of cardboard with a small square cut out of it. Inexplicably, Keppel Stuart realizes that someone must have cut out the cardboard piece and sealed it with a Chinese coin from his own collection after first purloining the original contents of the sealed envelope.

The next day, a taxi cab passes Stuart on the street and Mademoiselle Dorian drops a note out the window. Stuart retrieves the note and finds a hand-written warning to close his shutters at night. The doctor begins researching Scotland Yard files on the recent mysterious deaths of Sir Frank Narcombe, Norwegian scientist Dr. Henrik Ericksen, and the Grand Duke Ivan. Stuart chooses to ignore Mademoiselle Dorian’s warning and while studying the files only narrowly manages to avoid a needle-thin blue ray of light which enters through his open window and completely obliterates the mouthpiece of his telephone and a medical dictionary. Shocked by this fantastic occurrence, the doctor spies the shadow of a cowled man on his front lawn, but the figure retreats after seeing his assassination attempt has failed.

Without warning, a stranger bursts into Stuart’s study, relieved to find the doctor alive, but frustrated that the Scorpion has eluded capture once more. The stranger speaks with a French accent and introduces himself as Gaston Max of the Surete. Stuart tells the stranger this is impossible as Gaston Max’s corpse was recently dragged from the Thames. The Frenchman assures him that the corpse did not belong to Gaston Max for he should know as he is Gaston Max and it was he who strangled the man fished out of the Thames. This startling revelation concludes the first instalment. The second part of the book is concerned with detailing Gaston Max’s account of how he came to be involved with the Scorpion affair as we shall see in next week’s column.

This looked really cool. I’m going to see if they have it on Kindle. Thanks, I would never have known of Sax Rohmer.