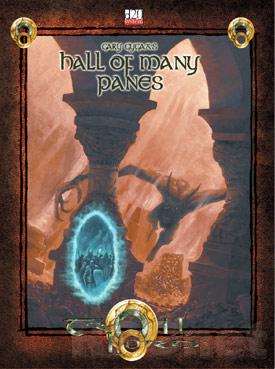 Whew. What a week. I bought a collection of 240 new SF & fantasy paperbacks on Monday, and trying to squeeze them into already-crowded bookshelves in my library is taking some determination. Tomorrow morning I’m throwing some clothes in a bag for a trip to Madison with Patty Templeton and Katie Redding for Wiscon, one of the best conventions in the Midwest.

But tonight, I relaxed and dusted off some of the goodies waiting patiently for my attention. The most intriguing one in the pile is Gary Gygax’s Hall of Many Panes, a boxed mega-adventure from Troll Lord Games, which I purchased on eBay back in March.

Panes was released in 2005, so don’t get too excited if you haven’t heard of it. It’s not a recently-discovered manuscript by the creator of D&D, or anything like that. It was originally written for Gygax’s latter day RPG Lejendary Adventures, but has also been statted for d20 systems, which makes it usable with virtually any of the popular retro-clones on the market like OSRIC or Labyrinth Lord.

Gygax was a master of the mega-adventure, and I’m not sure why he didn’t write more of them, especially at the end of his career when he was experiencing a resurgence.

But then again, I wonder at the fact that the ones he did write — like Necropolis and the massive Castle Zagyg — weren’t more popular, and perhaps that helps explain it.

Anyway, we’re here to talk about Hall of Many Panes. Troll Lord has done a great job assembling a package clearly modeled after the classic TSR boxed sets: inside are three sizable books (76, 96, and 102 pages) and a pamphlet of maps and gaming handouts. The books are a little light on art, but sturdy and highly readable. 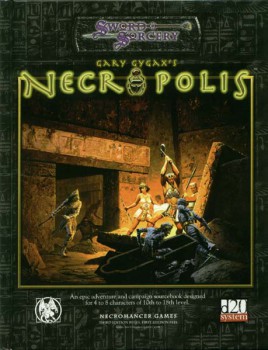 The premise of the adventure is pure Gygax: a beautiful woman appeals to the party to rescue her lover, who’s been trapped in the Hall of Many Panes, a dungeon complex with… you know, the box text conveys it better than I ever could, so here it is.

Within the ethereal darkness towers the Great Hall of Panes. Built in the uttermost depths of time, by the immortal hands of Amadan Mor (otherwise known as Zagig, Xagyg or Zagyg), the Hall of Panes is a matrix of dimensions. Its depth and height defy imagination as it plunges into the great infinite reaches of space. A ramp, wide with gentle slopes, spirals into the utter darkness. Along its reach are shimmering lights, close, yet distant. These are the Panes, gateways to worlds uncountable.

The Hero-Bard Mcgregtim has earned the wrath of the gods of the underworld for his love of the Lady Rowina. Caught up in a war he could not match, he was hidden in a pocket dimension, this for his own safety. The Lady Rowena remained behind to seek heroes to rescue her love…

The Hall of Many Panes is a mega adventure in all its classic glory. Within the towering cylinder which is the Great Hall are 51 panes described, by color and shape, that bridge the gulfs between worlds and allow adventurers to enter into worlds unknown.

The Hall of Many Panes is suitable for a party of six d20 adventurers of 8th or greater level.

Hall of Many Panes was co-written by Jon Creffield, author of The Lejendary Road and other adventures for Lejendary Adventures. It’s not a very serious adventure, filled with puns and goofy situations.

As you can well imagine, the 51 panes lead the adventurers into some bizarrely otherworldly scenarios, starting right off the bat with the very first, in which the players are turned into tiny acorn people and forced to flee from some pretty aggressive squirrels. Other panes turn them into golems, dump them into time loops in Mongolia, bring them face-to-face with worshipers of a dark, Cthulhu-like deity known as “Dhu-kalkhru,” or transform them into lions or even stranger things (like wind).

Your players will find themselves exploring desert isles, pirating, joining massive desert caravans, leading slave revolts, deep inside fathomless dungeons, inside a demonic laboratory, and in stranger places. There’s a lot of humor to break up some of the grim monotony, including at least one adventure inspired almost entirely by puns.

Typical for a mega-dungeon of this type, each pane is a separate adventure and most of them are not completely fleshed out. The game master (and the players) will decide for themselves which worlds are truly interesting, and those are the ones you’ll have to do some work expanding.

The last thing you should know about Hall of Many Panes is that it’s relatively inexpensive, at least for now. Although it was released over seven years ago it is still in print, and while its list price is $39.99, several online sellers (including some at Amazon) are currently selling it new for well under $20, and I got my copy for around 15 bucks. There were five copies listed on eBay in the last 30 days, all under $20.

Sounds like a classic Gygax module, which I hate. But I gotta say, it has a great title.

*Choke* How can you say that? The Village of Hommlet is one of the best RPG titles ever written.

[…] also purchased the other major boxed set Gygax did with Troll Lord: the massive Hall of Many Panes (2005), a huge adventure originally written for Lejendary Adventures which was re-statted for d20 […]

[…] also purchased the other major boxed set Gygax did with Troll Lord: the massive Hall of Many Panes (2005), a huge adventure originally written for Lejendary Adventures which was re-statted for d20 […]