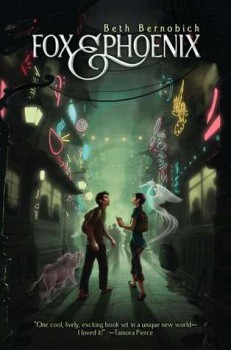 In Fox and Phoenix Kai again narrates. Lian is off at the University in Phoenix City. But her father is terribly ill, and his illness is affecting the entire city. Kai has his own problems – he is a bit estranged from his circle of friends, and his own magic studies are not going so well. Attempts to contact Lian at the University to warn her of her father’s state seem not to work. Then his mother disappears.

Trying to help, Kai ends up encountering the King’s old friend, the King of the Ghost Dragons, and the King sends Kai on a journey to Phoenix City to find out what is going on with Princess Lian. Kai’s best friend, Yún, a girl who has been engendering complicated feelings in his teenage mind, accompanies him – along, of course, with their spirit companions. And so they trek towards the big city – meeting a variety of perils along the way, and learning, especially at Phoenix City, that there are complicated political forces entangled in the problems of Princess Lian and her father. (Not to mention Kai’s mother.)

This is a very enjoyable novel. It expands on the interesting world-building introduced in the novelette. It develops the characters of Kai and his close friends, especially Yún, to very good effect. We get a better feel for the politics and geography of the setting, and hints as to the history. The story introduced in the novel is resolved effectively – there is certainly room for additional stories in this setting but we are not left hanging. These days some of the most enjoyable SF/Fantasy is being published in the YA category, and Fox and Phoenix is another example.