“You brought back a what?”

“A shrunken head of what?”

“Umm…supposed to have been a person I guess.”

“And you’re happy about this acquisition?”

“More like ecstatic, actually.  I mean as souvenirs go…”

Sometimes the Black Gate staff still isn’t sure what I’m doing in their offices or whether they just left the front door unlocked once too often and I somehow just wandered in; left behind by a traveling midnight showing of  The Rocky Horror Picture Show.

Still, when I returned from my St. Louis road trip, fresh from attending the 2012 Haunted Attractions Show, the curiosity was palatable and far be it from me to disappoint.

The 17th annual gathering of all things disturbing and their creators was a huge success, cram-packed with enough material to keep me in posts for several weeks to come.

As always, it’s difficult to determine how best to parse this stuff out; for instance, too much in one post and I could easily cause you to throw up in your mouth a little (the special effects artists seem to get more realistically “special” every year).

I mean, I could write an entire post about a little gem called “Farting Fatty,” a high-end animatronic that hit four of your five senses full on.

Suffice it to say the sound effects were accompanied by a new type of fog machine that could be augmented with… um… smells.  By midday the attendees of HAA were giving this booth a wide berth.

Some of the most startling and realistic effects we saw at HAA came from the use of HD flat screen TVs strategically positioned to replace windows in a particular tableau.

Pale Night Productions has some of the best examples of this, in particular the one called Zombie Attack which actually sprays the observer with zombie brains at the end.

Software-controlled robotics is definitely the trend in special effects either because they are ultimately cheaper than CGI and safer than actors in suits, or simply because the technology has gotten so amazingly realistic. 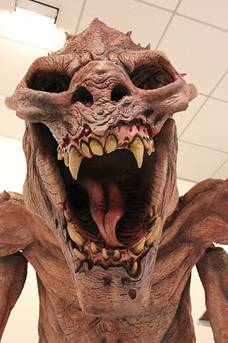 HAA hosted multiple vendors selling micro-pneumatics and electronics which can be configured to animate any imaginable horror driven by impressive and user-friendly software programs.

The costs involved have also come down to the point of being attainable even to home haunters.

But the trick is having the technical savvy to weld all this stuff together into your very own Pirates of the Caribbean ride; something still beyond the average person.

In addition to covering the show, Black Gate photographer Chris and I had the opportunity to walk through The Darkness, a haunted attraction in St. Louis voted third most terrifying in the US by the Discovery Channel.

Permanently housed in a two-story warehouse The Darkness has thousands of square feet of opportunity to send you screaming into the street and showcases some of the cutting edge visuals for sale at HAA.

The most impressive effects I witnessed include horrifyingly costumed pigmy warriors who blast you with poisoned darts as you walk through the jungle scene and realistic animatronic mummies in the extraordinarily decked out Egyptian tomb walk-through.

As a bit of a haunted attraction snob, I’m not sure I agree with the Discovery Channel’s assessment.

But it was still incredibly cool to be able to experience it with a smaller crowd in March, rather than the madness it becomes in the month of October.

However, priced at $3400 an animatronic Farting Fatty like most of the robotics featured in The Darkness and at the HAA, is a bit beyond the reach of the typical home decorator.

So here are my picks of the best of what I saw, which can be shipped directly to your door for a reasonable fee:

Smokin’ Glassware: Why wait for October to bust these out?

Serve up your next party beverage in these nifty cocktail glasses that ooze out a perfectly chilled fog using dry ice chunks.

The effect was super impressive and definitely adds a unique touch to any gathering; not to mention it keeps your drink nice and chilly.

They are available for $4.25 each plus S&H by emailing the company from the website.

Starting at $35 an expert “foam-ologist” will custom “engrave” your stone with whatever verbiage you provide.

We nearly killed ourselves laughing thinking of all the possible applications beyond the obvious Halloween ones.

Split up with your boyfriend / girlfriend and want to make a statement?  Have a friend hitting a milestone birthday?  Want to send a message to a slave-driving editor who makes you adhere to your deadlines even after a weekend with a bunch of partying special effect artists?

The possibilities are endless and I’m already making a list to place my order.

Check out how they do it:

Pumpkin Teeth LLC won the Five Bat last year so we couldn’t give it to them again.  But that doesn’t stop us from telling you this is still one of the coolest ideas we’ve seen for creating unique pumpkin art. 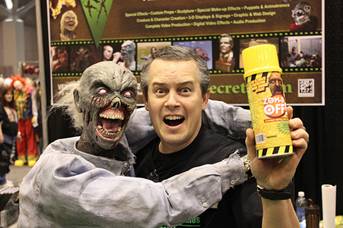 Using simple plastic spikes of various shapes and sizes even the most challenged pumpkin carver can create a scream-worthy décor and at $5.99 per package of teeth, you can afford to “put the bite back in your Jack O’ Lantern.”

With Zombies being the new Vampire, no respectable household should be without a can of Zom-B-Off.

Actually, the all-zombies-all-the-time web site lets you download a free label you can attach to any can of something with a yellow cap to create the effect.

The gents behind Zom-B-Off have also created a site where professional and amateur haunters can share tips on creating the creepiest effects on the cheap.

Just sign up at www.tophaunttips.com to get in on the fun.

Last and certainly not least are the purveyors of my awesome shrunken head acquisition, The Gemini Company.

Artist John Weisgerber, puppet master and aficionado of sideshow freaks creates all manner of Victorian-mantelpiece-worthy items such as the Fiji Mermaid; a replica inspired by those made famous in P.T. Barnum and Robert Ripley museums.

He also creates candles that actually look like gross things in jars, something no bathroom shelf should be without – at least in my opinion.

In the coming weeks I’ll bring you the deets on a couple of indy horror films whose creators I had the pleasure of chatting with, as well as an interview with Chuck Williams, actor extraordinaire whose recent appearances include Pirates of the Caribbean: On Stranger Tides and the upcoming John Dies at the End.

Until then, I’ve named my shrunken head “Ernie” and have him sitting in a place of honor right next to my adult beverage blender.  I only hope this semester’s interns don’t confuse the two.

[…] However, Goth Chick News is dedicated to a particular segment of participants and C2E2 is nearly as rich in material as the HAA. […]

[…] (New York and Los Angeles – 18 years and older only): I became aware of this torture-fest at the Haunted Attractions show back in February, where their display was a live actress laid out next to a television playing […]