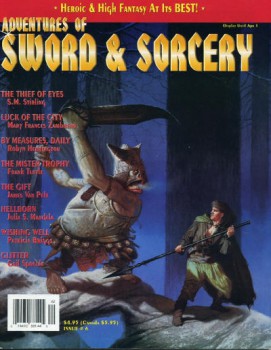 John DeNardo and his team at SF Signal know when they have a good thing going.

How do you top that? I know — impossible, right?

Well, all credit to Patrick Hester and Jaym Gates at SF Signal for making a terrific effort. In episode 108 of the SF Signal Podcast they’ve assembled a knock-out line-up of heavy hitters to discuss Sword and Sorcery for the modern reader. Including:

The panel discussion was pretty good and enjoyable.

I love that cover to AS&S–and I LOOOVED that magazine! R.I.P. Adventures of Sword & Sorcery…

Thanks James! Find any good recommendations?

John — yeah, I know exactly what you mean. I’m deeply jealous of that Daniel Horne cover. You can click on the image for a bigger version.

Yes, Adventures of Sword & Sorcery lived fast and died hard, after only seven issues. There’s never been another magazine like it. It is still missed today.

I miss the cash I shelled out for a subscription when the guy that owned it announced he was reviving it (and boy what a help it would be to get some early, good faith subscribers) and he never did anything with it. Nor did he return my emails.

That sort of crap makes it just a little bit harder for the next guy that wants to run a magazine.

Anyway — that has nothing to do with what I’m sure is an awesome podcast!

John, I’ll need to go back and listen again, but The Lion of Cairo and Black Dog caught my ear.

Bummer! Sorry to hear that. And you’re right, when a small press mag goes down (and takes subscribers money with it), it always makes it harder for the rest of it to win the confidence of subscribers.

But, having run a smal press magazine this long, I’ve learned not to throw stones. Keeping a magazine alive requires faith and a lot more money than most people think. I’m sorry you lost your cash, but I sincerely doubt there was any malice involved.

I subscribed after it had collapsed, when they specifically asked for new subscribers for a relaunch, probably one of a handful that did. A good faith gesture, a ‘hey, we support you’ type of thing. Nothing happened, zero communication or updates. Emailed multiple times (to multiple addresses) after several months and never got any kind of response (iirc neither did anyone that submitted stories for their consideration, they had reopened to subs I believe).

This was not a case of me having been subscribed to a mag and it going under, that I can forgive. This was a case of me staking money as a show of support and being completely disrespected for it.

I doubt it was malice as well — just incompetence coupled with a lack of integrity. In all honesty I prefer malice.

No more derailing, I promise! Going to carve out some time to listen to these podcasts this week.