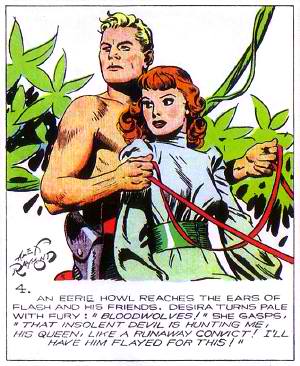 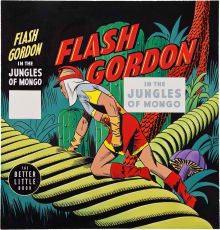 “Jungles of Mongo” was the eighteenth installment of Alex Raymond’s Flash Gordon Sunday comic strip serial for King Features Syndicate. Originally published between June 21 and November 1, 1942, “Jungles of Mongo” picks up where the preceding installment, “Queen Desira” left off with the seductive Queen and a bare-chested Flash riding the local steed, a gryph through the lush jungles of Tropica with Dr. Zarkov and Dale Arden bringing up the rear. Prince Brazor, who has usurped the throne of Tropica from Desira, releases a pack of bloodwolves to hunt them down.

Alex Raymond captures the beauty of Tropica’s flora and fauna with the same care and attention to detail that he demonstrated in some of his earliest Mongo strips. Flash fells a great tree so that the fugitives can travel down the river and, in a move that is now unthinkable, our hero deliberately sets fire to the forest to aid in their escape from Brazor and his bloodwolves. Of course, the cliffhanger nature of the serial demands constant peril and the fugitives quickly find themselves facing the Whirlpool Falls. Zarkov and Dale survive the falls, but Desira (whose top is provocatively torn going over the falls) is sucked into the whirlpool with Flash apparently sharing her fate in his attempt to rescue her.

Flash and Desira are carried by an underwater current into a cavern beneath the river. Flash climbs astride the prostrate form of Desira to perform artificial respiration to revive her when they are attacked by a giant cavernosaur, a cross between a seal and a plesiosaur. Flash kills the creature after a dramatic struggle. Don Moore’s script and Alex Raymond’s art wring every last bit of sexual tension out of the final panel with a trembling Desira in her torn clothes nestled against Flash’s heaving bare chest after his exertions against the carnivorous mammal. Moore notes that Desira ceases to be a Queen at that moment and is only a woman as she pleads with Flash to hold her. 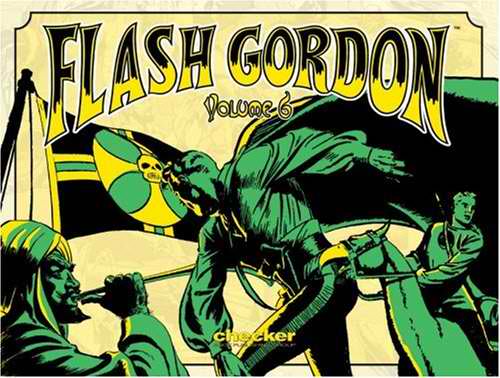 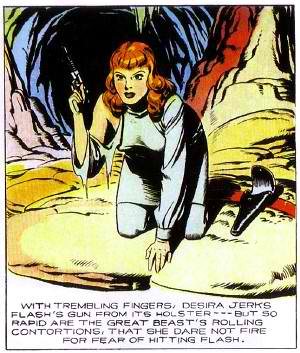 While Flash and Desira make their way through the phosphorescent cave system, Zarkov and a grieving Dale, convinced that Flash and Desira are dead are captured by Brazor. Learning that Desira and Flash apparently perished in the whirlpool, Brazor triumphantly declares himself King of Tropica and decides to murder the only witnesses to his treachery. He opens fire on Zarkov and Dale who plunge into the river and are dragged down into the whirlpool themselves.

Naturally, Dale and Zarkov end up deposited by the underwater current into the very same cavern and come across the corpse of the cavernosaur and realize that Flash must be alive. Dale’s clothing is torn by the current, but the results are not as revealing as with Desira nor is Zarkov afforded the opportunity to administer artificial respiration on Dale.

Meantime, Flash and Desira come upon a bread tree (yes, I said a bread tree) growing in the underwater cavern, but their meal is cut short by the arrival of a swarm of rock termites. Dale and Zarkov stumble upon Flash and Desira and the four of them make a swift retreat from the army of termites. 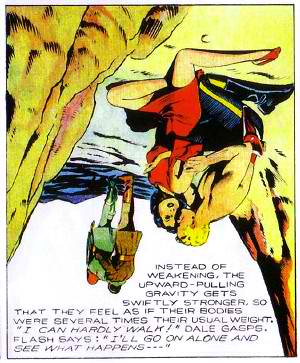 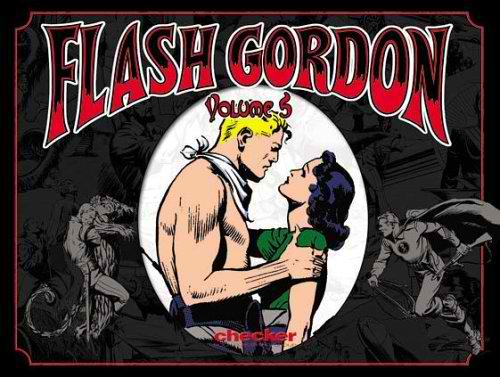 The cliffhanger thrills hardly stop there as the four of them are pulled by magnetic rays into an opening in the cave wall. They are carried into a cavern where they believe there is no gravity, but quickly realize that the magnetic rays have overpowered the gravity so that they now exist in an upside down world. The four of them are soon walking along the roof of the cave like bats. Flash hypothesizes that an unseen meteorite lodged in the roof must be the cause of the magnetic force that has successfully reversed the gravity. This bit of Edgar Rice Burroughs-inspired fancy takes a typically deadly turn when they are set upon by a flock of pteranodon-like dragon bats. After dispatching the bats, they find the magnetic forces failing and perilously climb down to the floor as gravity is restored to normal. Making their way out of the cave system and back onto the surface world, Desira quickly recognizes their surroundings and tells them they have just passed through Tropica’s famous Magnet Mountain and that they are near the capital city of Tropica.

Stopped at a guard post, they learn that King Brazor has declared that he witnessed the Queen drown and has put his guards on the alert for an imposter disguised as the late queen in an effort to steal the throne. Naturally, the guard believes Desira is an imposter and sounds the alarm. Flash, Dale, Zarkov, and Desira flee on gryph-back to the Desert of Fire with Brazor’s troops in fast pursuit as the Tropica storyline ends on the verge of yet another chase across the exotic landscape of Mongo.

Where did the baby name Desira come from in 1942? – Nancy's Baby Names