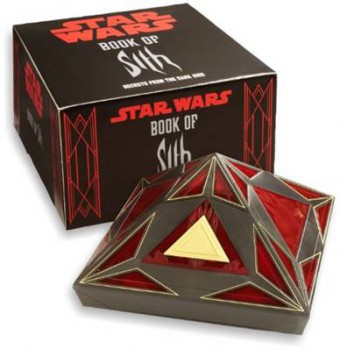 I am not a huge fan of Star Wars.

Now, wait.  Before you start sending me emails of an aggressive variety allow me to say that there are aspects of the movies I like; quite a few actually.

However, I have to say that Lucas lost me with the whole militant teddy bear angle, and being that story line was fairly early on in the series, I never really got my Jedi mojo going.

Bet you can guess.

And you can bet George Lucas is well aware that even if there are people like me, who aren’t hard-core acolytes that can speak Wookie, he can still find a way to get me to buy in.

First there was Star Wars: The Blueprints which I told you about back in November.  For a mere $450 (at the low end) you can own a full set of the production blueprints for all of the models used in the movies.

Even I had to admit that this intriguing.  It was beautifully produced and when placed on one’s coffee table, it may have screamed “Geek” but more importantly it screamed, “Geek, with plenty of expendable income.”

And according to my friends over at Amazon, it sold pretty briskly over the holidays.

And now, just in time to coincide with The Phantom Menace being re-released in theaters in 3D format, comes the Book of Sith: Secrets from the Dark Side.

My minions over at Wunderkind PR sent me a sneak preview in the form of a press kit and I must say, the sample alone is pretty cool. 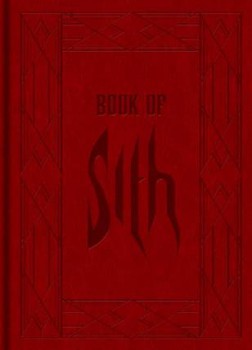 The book is 160 pages with a red, leather-like cover which in and of itself looks fairly evil.  It includes a scrap of “Sith burial shroud” along with “a battle map from the Great Galactic War, a diagram of Palpatine’s master plan, an Empire propaganda poster and a note from Luke Skywalker,” all tucked in the pages.

Admittedly, though I’m not sure I know what any of that is, beyond the note from Luke Skywalker, it’s too late now.  I’m sucked in.

The final touches, which will be included when the whole package goes on sale February 10th, also include a Sith crystal and a Sith talisman, enclosed in a blood red case which opens at the touch of a button.

I’m now perspiring a little and my “place order” finger is starting to twitch.

Lucas scores maximum points for marketing, no doubt about that.

The note that came along with the press kit said the following:

Fragments of five essential dark side texts were passed among numerous Sith and Jedi who added their comments to the pages.  Through the years, Darth Sidious pilfered and secreted away these texts, along with various objects created by his most powerful predecessors.  Using this collected knowledge, the Emperor wrote his own manifesto, a sixth text, as well as a preface for the compilation.  Each original text sheds light on the plots, exploits and philosophy of the infamous Sith Order.

For years these texts and various accompanying artifacts remained concealed within a mysterious pyramid-like case.  But now, with this recovered collection, all students of the Force can unleash the power and the madness of the dark side.

It’s true, the Book of Sith is notated in all of the margins until it definitely reminds you of an overused college text book; and some of the notes are as entertaining as the text.  For instance, in a chapter about the Sith “pure bloods,” Yoda himself (who has exceptionally tidy handwriting for having such stubby little fingers) writes:

A Grand Master even the Jedi have… 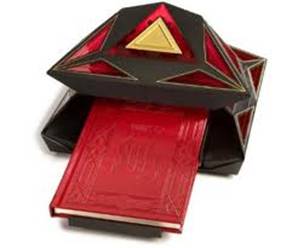 Cute.  He even writes in “object, subject, verb.”

Daniel Wallace is the author, in collaboration with Lucasfilm.  If that name sounds familiar to you it’s because he also authored The Jedi Path, “an ancient training manual that has educated and enlightened generations of Jedi.”  Both books contain amazing art from Star Wars illustrators who I’m sure are very well known in other circles.

Though we aren’t up in that $400 range with the Book of Sith, it’ll still require some saving of the weekly allowance.  The list price is $99 but Amazon is taking pre-orders now for $62.99.

So George, Star Wars fan or no, you had me at “Sith burial shroud.”

Will you be headed to the theaters as well as your local book store on February 10th?  Can someone please explain “Palpatine’s master plan” to me?  If so, post a comment or drop a note to sue@gothchick.com.

Something that changed my perception of the Star Wars saga…I realized that the Empire/Sith were actually not the great evil of the story, and that Lucas was nothing more than a propagandist for the Jedi…

Ok, that’s the best comment posted so far this year…