This week marks two years since our beloved editor John O’Neill convinced me there was a place for blood-streaked, supernatural stuff to be splattered around the Black Gate web site.

A publication dedicated to sci-fi and fantasy certainly wasn’t the first place I would have thought to set up shop. And in the last twenty-four months a few sites where “my sort” of topics would have been more at home have come calling. I could have pulled up stakes and gone to live and write in a sea of angsty 20-somethings, with multiple piercings and a monochrome wardrobe.

Or I could stay in the bowels of the Black Gate offices, where above me E.E. Knight stands on the roof taking the occasional pot shot at a curious tourist with his Mauser, and Ms. Clooney’s Pre-Raphaelite Sisterhood brews endless pots of foul-smelling herbal tea.

Ultimately it was an easy decision.

And now, two years later, I’ve become accustomed to the seat in the unisex bathroom being forever left in the “up” position (Howard Andrew Jones, I know that’s your doing) and the occasional office brown-outs caused by Scott’s tinkering with the cable television.

I’ve also had the pleasure of making the acquaintance of some of the most innovative talent in literature, music, indy film and art.  I’ve introduced you to the guy who sound-tracks Hugh Hefner’s Halloween parties, the abducted kid from Close Encounters and a zombie-blasting, 80’s pulp-fiction hottie.

I’ve got the greatest job ever.

But most important, I’ve been introduced to the greatest audience ever.

A dark and disturbed world of thanks goes to the readers and staff of Black Gate for making this an amazing two years.

The ladies of Wunderkind PR are definitely among the list of cool kids who Black Gate have put me in touch with.  And never ones to let a reason to celebrate go… well… uncelebrated, the postman brought me what must be the pinnacle of anniversary presents this week.

The note inside the enormous box read: “Happy 2nd Anniversary Goth Chick!  From a galaxy far, far away Lucasfilm has sent you the original Star Wars blueprints.  Enjoy!”

Now the staff of Wunderkind knows full well that the contents of this box would likely send the majority of the Black Gate staff into a fit of vapors; John himself would probably scream like a little girl if he saw what I’m looking at.

It is for this exact reason that they’ve sent it to me instead of routing it upstairs.

Which makes it about the best present of all time (insert evil laugh here).

Haven’t you heard about this yet?  Well if not, allow me to fill you in.

What I have here, behind the locked door of the Goth Chick News office is nothing less than a beautifully bound, encyclopedia-sized coffee table book containing more than 200 of the original production design blueprints created for all six films of the Star Wars saga.

The blueprints, filed away until now in the Lucasfilm archives, have been released for the first time in this limited edition book featuring more than 500 photographs and illustrations.  Though there have been many “art of Star Wars” books only a few blueprints – almost too small to be read – have ever been published.

The Rebel Blockade Runner hallway, the hold of the Millennium Falcon, the Death Star, the Emperor’s throne room, Jabba the Hutt’s palace, X-Wings, TIE fighters and the Tattooine homestead – all of these places and hundreds more had to be designed, built, painted and dressed, with these technical drawings showing the way.

The unsung heroes of the art departments are the draftsmen, who drew in collaboration with their art department heads, but who also added their own ideas.  Their blueprints have an attribute that concept art lacks – a sense of the real.  It’s been an amazing adventure to bring these blueprints to light after all these years. 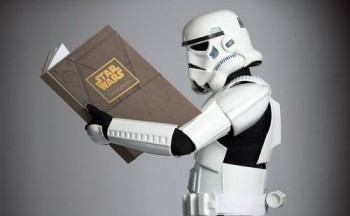 Presented in an oversize folio and housed in a cloth-lined, clamshell case, each copy is hand-numbered and only 5000 English language collector’s volumes will be printed.  The first 125 will be signed by the surviving Academy Award winners for Best Art Direction for the original Star Wars film.

Coming in at 336 pages and 35 pounds, the available copies will retail from $500 – $1000 for the signed version and are on sale as of November 1st at Amazon, Barnes and Nobel, and at the book’s own web site.

Many thanks to Wunderkind for sharing this unbelievable find that every boy in this office is drooling to have a look at.  Now let’s see if we can’t negotiate that toilet seat position…

Are you going to pop for this blueprint book?  Have an interesting tidbit to share on Goth Chick News’ second anniversary?  If so, post a comment or drop me an email at sue@blackgate.com.

Black Gate » Blog Archive » Goth Chick News: It’s All One Big, Dark Side to Me