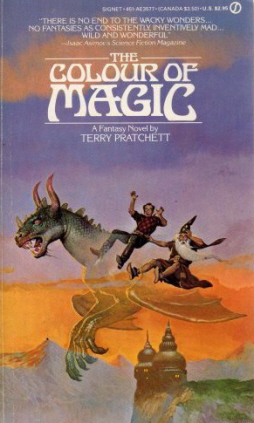 I have long felt that Terry Pratchett is badly underrated as an author.

Despite his massive success, the manner in which his book are marketed – a fabulous romp – tend to significantly underplay both the intelligence and the sensitivity of his Discworld novels. His books are simultaneously less superficially funny than they are supposed to be and more intellectually entertaining.

Whereas the humor in the earlier novels tended to revolve around slapstick gags, obvious subversions of genre tropes, and puns, it gradually gravitated towards an amusing form of social commentary wherein he addressed everything from Hollywood film-making, women in the military, and the theory of fiat currency to the precarious nature of technology investment.

While his conventional and fundamentally decent form of humanism has always been the foundation of his commentary, (usually shown from the perspective of his most fully developed character, Sam Vimes), he has seldom permitted it to override either the plot of the story or the ojbective of entertaining the reader.

Like most Pratchett fans, I was deeply dismayed to hear of his being diagnosed with early onset Alzheimer’s disease.

And like many Pratchett fans, I was also dismayed to see that he had made himself the public face of legal euthanasia in the United Kingdom with his presentation of the BBC documentary Terry Pratchett: Choosing to Die earlier this year. This embrace of euthanasia is particularly ironic in light of the 39th novel in the Discworld series, which is entitled Snuff and deals with the dark subjects of slavery and large-scale slaughter. Let the hijinks begin!

Let me stress that Snuff is not, by any means, a bad novel. It contains an intriguing, if occasionally incoherent, murder mystery. It also contains a panoply of interesting and life-like characters who are richly drawn with all the expert skill one has come to expect of Pratchett. 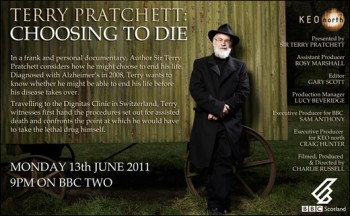 Unfortunately, it also contains what can only be described as a polemic that is unexpectedly crude as well as fundamentally dishonest.

The result is a book that can barely be described as a Discworld novel, containing as it does little of the humor and none of the intelligent social commentary that so many of its predecessors have.

It would be easy to blame this on Pratchett’s disease, but as he no longer actually writes the books, but dictates them to an assistant instead, the reader is left to wonder how much of the book is Pratchett and how much of it is Rob Wilkins, his assistant.

Now, I take no exceptions to polemics per se, being a reasonably well-known polemicist myself. But polemics in the guise of fictional entertainment tend to make for bad fiction. It is a testimony to the superlative skill of Pratchett that Snuff is not only quite readable, but even touching in parts despite its devolution into bad polemics. For if I take no exception to polemics, I do take exception to bad polemics that are not only blatantly dishonest, but downright unfair.

For example, appropos of nothing, Pratchett has a character blaming a massacre that clearly took place as the result of a misunderstanding, being the rescue of a young girl that people believed, not without reason, was going to be eaten, on religion.

Best not to say anything, then,’ said Miss Beedle. ‘All slaughtered, for no reason at all. It happens. Everybody knows they’re a worthless people, don’t they? I tell you, commander, it’s true that some of the most terrible things in the world are done by people who think, genuinely think, that they’re doing it for the best, especially if there is some god involved.

This is vastly ironic, as Pratchett follows it up on the very next page as follows:

Miss Beedle stood up and brushed at her dress, as if trying to remove the crumbs of history. Standing there, in the chintzy room with the harp in it, she said, ‘I don’t know who those people were who killed the goblins and beat my mother, but if I ever found out I would slaughter them without a thought, because good people have no business being so bad. Goodness is about what you do. Not what you pray to. And that’s how it went,’ she said.

So, if we are to follow what passes for Pratchett’s logic here, rescuing a little girl from confirmed cannibals and killing the cannibals is evil, but slaughtering people who haven’t done anything to you, but have merely harmed one of your relatives is the hallmark of a sympathetic character. And god and prayer make things worse, even though they’re not involved in any way. And Pratchett demonstrates his utilitarian amorality when he attempts to make a moral case for situational cannibalism.

Cheery Littlebottom shrugged. ‘But eating your own child, that’s got to be wrong, yes?’

‘Well, sergeant,’ said A. E. Pessimal, ‘I have read about such things and if you think of the outcomes, which are the death of both mother and child or the death of the child but the possible life of the mother, the conclusion must be that her decision is right. 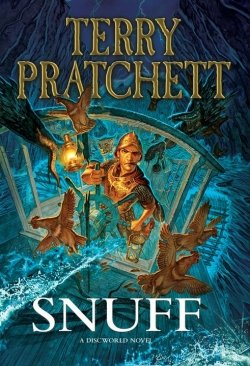 Needless to say, it is this very logic that has reliably produced the very sort of dreadful events that Pratchett decries, however incoherently, in the voice of Miss Beedle. But the worst part of the polemical aspect of Snuff is the way in which the end of the slave trade, which in this case concerns the subhuman, cannibalistic goblins, is presented as the result of the decent secular humanism of Sam Vimes.

This would be excusable as a pure fantasy digression from the historical reality, but in combination with the pointless anti-religious posturing and the introduction of a minor character named “Bewilderforce Gumption”, it instead tends to demonstrate the shameless dishonesty of the social commentary. While Gumption is not a negative commentary on William Wilberforce, the Christian evangelical who spearheaded the abolitionist movement, his name does serve to indicate that Pratchett knows the historical reality of the slave trade and chose to ignore it because it tends to weaken, if not undermine entirely, his polemic.

None of this should be taken as an argument that Terry Pratchett does not have full prosaic license to create whatever world he can imagine. But once a writer steps beyond the bounds of pure fantasy and wishes his fiction to be understood as commentary on more serious manners, he has the concomitant duty to understand that his work can and will be criticized on the legitimacy of the commentary, not merely the entertainment value.

And it is not being hypersensitive to point out the pernicious nature of his dishonesty here; consider this glowing review from a reader on Amazon: “This is an excellent study of prejudice without basis and the influence it can have.” It is, in fact, nothing of the kind. The prejudice is well-founded, the study is totally without any basis in science, reason, or history, and the claimed influence is simply false.

While there are works where the polemical aspects actually add to the literary quality of the work, such as Animal Farm, or even serve as its only redeeming value, as with Atlas Shrugged, in the case of Snuff, the poor quality of the polemic serves to reduce the entertainment value of the novel, and not simply for those who perceive it. As another reviewer noted, “it bears little resemblance to [the Discworld] series”. Given the likelihood that Pratchett appears to be rapidly approaching the end of the series, fans of it can only hope that the 39th novel does not serve as the final word on the subject.

Hmm — reminds me of my opinion of Monstrous Regiment. By the end of it, I was hoping that one of the soldiers would turn out to be male.

But, leaving aside that someone would notice the effects if the army was half female, it read like it left out any reason why armies are made up of men, and then mocked it for having no reason.

I would agree that Terry Prattchett is often badly underrated as an author, but — as this review of Snuff (which I myself have not read) would seem to be edging towards — only when his stories actually catapult themselves into places well beyond what most authors accomplish. And I suspect many of us would argue that at least on a number of occasions he has indeed done this to an extent that merits hint he description of very, very underrated indeed. However, at other times, he has turned out less remarkable works. (Yes, and even those earn sales for which most of us would give our eye-teeth, but still …. 😉

Much the same could be said of Nation, where religion is portrayed as simultaneously causing harm and also leading the main character to discover the truth about his people. An excellent story overall, but with serious plot and historical inconsistencies.

Prachett is at his best when applying his secular humanism to secular subjects such as the post office. When he strays into the realm of religion, while he continues to make witty and accurate observations about religious people, his world view fails him in regards to faith itself.