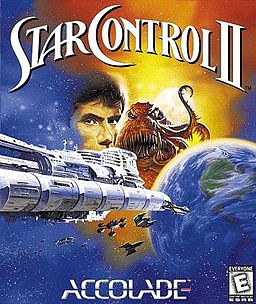 Last week Black Gate blogger Scott Taylor did a special Art Evolution post on the august Erol Otus, perhaps the most distinctive of the first edition D&D artists. Otus’ work has graced numerous RPG books and adventure modules, including some of the most famous in the industry, including the seminal Deities and Demigods and the D&D Basic boxed set.

Go ahead, click on the link to Scott’s article and check them out. I’m sure you’ll find at least a few familiar pieces.

One of the more intriguing tidbits Scott shared in the comments section of his excellent article was this one:

Erol has worked for years in the computer games industry, most notably with Star Control II, but it’s cool to see him back at tabletop gaming.

Star Control II is one of the most famous computer role playing games ever created. Published in 1992 by Accolade and later ported to the Sega Genesis and the short-lived 3DO platform, it was named one of the best games of all time by both IGN and GameSpot.

It put you in charge of a sturdy starship and gave you over 500 star systems to explore, and a series of fascinating mysteries involving 16 cleverly-designed alien races to unravel, set in a galaxy filled with surprises and plots within plots.

But I was pretty sure Scott was dead wrong about Erol being involved. I would have remembered that.

I certainly remember Star Control II well. Developed by ex-TSR employee Paul Reiche III and Fred Ford, the game was the spiritual sequel to the immensely popular Starflight 2, which Reiche had worked on at Binary Systems — one of my favorite games of all time, and the game that nearly derailed my career as a grad student. 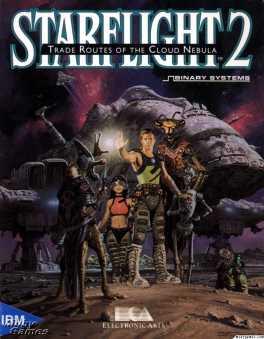 Now, it’s true I have a lot of computer RPGs. In fact, I pretty much have them all.

Yes, that runs to thousands of games on dozens of platforms, double stacked at shoulder height in 22 bookcases circling my basement. It’s something of an obsession, and it’s best we don’t talk about it.

Anyway, it’s entirely possible I could be wrong on the art credit for a game almost two decades old.

Still… I was pretty damn sure Erol Otus’ art hadn’t appeared in Star Control II. I was confident I would have recognized it, even reproduced at thumbnail size in a black & white game manual.

But Scott is rarely wrong, particularly when it comes to fantasy art. It was a mystery, and it sent me down into the basement to dig out my Star Control II box.

It turned out to be more challenging than I expected.

For one thing, the moment I ventured into the basement my kids reminded me I hadn’t been on the exercise bike for a few days.

Since I’m pretty strict about getting them off the couch and onto the bike at least once a day, they were only too happy to turn the tables.

So all of the research for this article was done on an exercise bike, set at level nine by my vengeful children. While I was able to locate an open copy of Star Control II fairly quickly, level nine turns me into a gasping fish in about 20 minutes, and after 30 I stagger off to puke in the basement sink.  That successfully limited the thoroughness of my investigation.

Secondly, the moment I opened the box it unleashed a wave of nostalgia.  Twenty years ago I was in grad school at the University of Illinois, playing computer games like Pool of Radiance and Starflight late into the night when I was supposed to be finishing my Ph.D. thesis.

Looking back now, I can see that computer games were a much more productive use of my time, too. Just flipping through the manual brought back great memories of the best science fiction games of the era.

Ultimately, I was able to pull it together enough to do an inventory of the art before I passed out on the exercise bike.

Unfortunately, even with confirmation in the credits, I couldn’t find anything that looked remotely like Otus.

Maybe he was responsible for concept art for the game, rather than anything  in the manual?

The made a certain amount of sense, although I certainly couldn’t recall any of the screenshots that reminded me of Otus, either.

Once I stumbled off the bike and upstairs to the computer, I came across several interesting clues in the Wikipedia entry for designer Paul Reiche III:

A childhood friend of early Dungeons & Dragons (D&D) artist Erol Otus, Reiche became interested in gaming as a teen. He and Otus played role-playing games together and released a few small games in the genre. Eventually, both wound up at TSR (the then publisher of D&D). They made contributions to the evolving game and other games by TSR, Otus with artwork, Reiche with game design (primarily on D&D and Gamma World). Reiche’s credits as developer include Isle of Dread, Slave Pits of the Undercity and Assault on the Aerie of the Slave Lords, and The Ghost Tower of Inverness…

After his stint at EA, Reiche formed Toys for Bob with Fred Ford, and created Star Control… [and] the sequel, Star Control II. Reiche’s friend, Otus, provided at least one illustration for the sequel’s manual.

Aha! The connection between Star Control and Erol Otus becomes clear. Why does it always come down to the people you played D&D with as a kid? 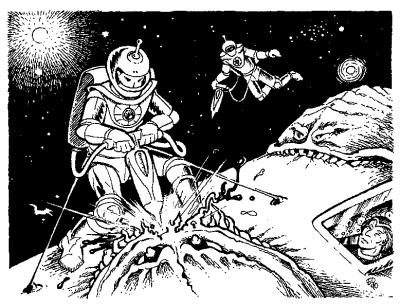 Long story short, a little online homework lead me to the scan at right, and the following explanation at a blog called Star Controller:

I was looking through a bunch of Erol Otus drawings that I scanned from the manual of Star Control for the Sega Genesis. One of them caught my attention…The reason why this caught my attention is because this is the first time I’ve ever seen a limpet close-up.

Figures. I was looking in the PC version. The Otus illustrations appear to be in the Sega Genesis manual. If I have one of those (not likely), it’s packed away with my Sega Genesis games.

A limpet, by the way, is that toothy critter gnawing on the hull of a ship.  If ever there was a creature calling out for an Erol Otus illo, it’s a limpet.

So there you have it. Once again, Scott Taylor is right and I am proved wrong… even if it’s on the basis of a single drawing in a late port to a classic game. I won’t doubt him again.

As for Star Control II, it’s inspired me to dig up my copy of DOS BOX and see if I can get it running.

I never did finish the game all those years ago — or Starflight 2, for that matter. And if they were worth delaying my Ph.D for, they’re certainly a better use of my time than the frivolous stuff I’m doing now.

LOL, nice one John. I was also under the impression that Otus may have done some computer graphic art for the game as well, but I could be wrong.

Oh, and speaking of old computer games, just yesterday I downloaded a free copy of Wizardry and stated playing it with my 5 year-old son. Now that brought back memories and boy is it a hard game! I wish you luck with Star Control II!

Black Gates been out 10 years and you haven’t won a Hugo so just stop now.

Scott — I know what you mean! I tried Wizardry again about five years ago.

All those wire frame graphics brought me right back to the early 1980s. Got pretty far… and then my entire party got wiped out on the fifth level of the dungeon (again!). That’s when I finally remembered why I’d never been able to finish the game in 1984.

If you enjoy the game, you should consider THE DARK SPIRE, a DS game that’s a lavish tribute to WIZARDRY. It was a lot of fun.

Radiant — ha! If there WERE something that could lure me away from Black Gate, it might well be retro PC gaming. 🙂

Star Control II and Starflight were both great games. I wish there were a modern game that had the same feel. There’ve been some that were close, some of which were great games in their own right–such as Mass Effect–but I don’t think any recent game quite has the same feel as those two. If anyone knows of something that does, I’d love to give it a try.