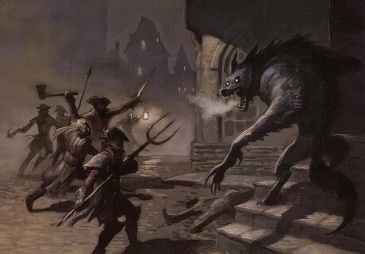 Magic The Gathering has recently released another set, this one featuring the dark plane of Innistrad. The end word of title in itself, Strad, should tell you all you need to know to get started here.

The Vampire Strad, as most older gamers will remember, was the famous vampire found in the classic TSR module I6 Ravenloft. That particular gaming supplement was so popular that it spun off its own boxed set and gothic fantasy dimension in the early 90s.

I’ve always been a fan of I6 for a couple of reasons. A: The cover might be the best work Clyde Caldwell ever did for TSR, and that’s saying something. And B: It featured the first TSR 3D map which detailed Strad’s castle.

Now I recently picked up a copy of this module, took it to Milwaukee, and had Caldwell sign it as Wayne Reynold’s birthday gift because the cover inspired Wayne to become an artist. That in itself should be enough to put it into TSR’s artistic top 10, but as the concept of Strad and his new domain began to grow, the creative think tank at TSR began to fail in how to deliver it. 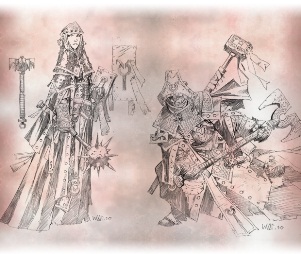 The Ravenloft Boxed Set ‘Realm of Terror’, and thus the world setting inside, didn’t capture the setting as it should have. Something about the world lost its shine, the ‘terror’ more at the craftsmanship of the world-building than the actual gaming goose-bumps. It was this rather huge promise that fell flat once you delved into the pages.

I mean, you had so much potential; vampires, werebeasts, gypsies, undead, constructs… the full pantheon of horror and it just didn’t take form in a way that helped players fall in love with it. Now that’s not to say the genre was untenable, I mean White Wolf launched Vampire the Masquerade at this time and it single-handedly sustained the company for a decade.

What TSR failed to do with their universe and idea has always saddened me because I believe they had a shot at greatness and simply missed the mark.

I believe this is why I’ve been so taken with Innistrad. Everything, and I mean EVERYTHING that Ravenloft got wrong, Innistrad gets right. This is the setting that D&D type dark fantasy gamers have been waiting for these past 20 years.

As I read the initial press releases I was instantly captured with descriptions as follows:

When the light fades and the moon rises over Innistrad, humanity becomes the universal prey. 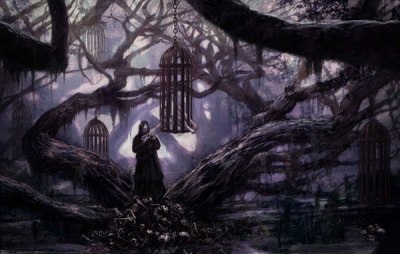 Packs of werewolves emerge like the tide, drawn out by the moon, their humanity washed away by animal rage. The vampire families bare their fangs at the scent of human blood. Hordes of the walking dead lurch across the manors and moors, driven by an innate hunger for the living. Alchemically created abominations twitch to life in alchemists’ laboratories. Geists haunt the huddled human towns and terrify travelers along the dark crossways in between. From Innistrad’s deeper chasms, powerful demons and impish devils plot humanity’s downfall, their influence spreading into all echelons of human society.

This is IT, the true dark universe we’ve been waiting for and MtG delivers it in spades with Innistrad. It’s an absolutely stunning collection to add to the Magic multiverse, and the art is so captivating I had to look at most images two and three times before my need for more pushed me on to the next.

In all, I say bravo to Wizards of the Coast for recapturing the magic of what could have been. Innistrad makes a perfect addition to Magic the Gathering, both in playability and style. I highly recommend taking a look at it if given the chance.

Interesting. I really liked the Ravenloft modules (not to be too finicky, but Strahd von Zarovich has an h in it), but *loved* the box set. Reading through it, at least, I thought it did a great job at capturing the feel of real early-gothic horror. And I was happy to find an ‘Appendix N’ listing inspirational horror books, the equivalent of the DMG’s list of inspirational early fantasy.

Then again, I didn’t get into White Wolf’s Vampire game at all. I dunno what to make of this Innistrad. I don’t play Magic, so I don’t know what it is, exactly — is there a story background, or is it just a set of cards? I will say that I feel that “hordes of walking dead” don’t fit with the subtler atmosphere implied by “manors and moors.” And, in terms of darkness, if these things are still just plotting humanity’s downfall, they’re a good ways behind the Dark Powers of Ravenloft, who controlled human society whether humans knew it or not.

Still, each to their own. In horror in particular, I get the sense that what works for one person doesn’t necessarily work for another. I’ll see if I can find these things …