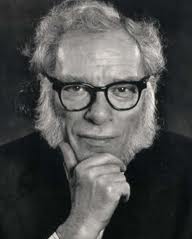 Back in 1977, science-fiction writer Isaac Asimov wrote a piece for Advertising Age predicting, among other things, that consumers would opt to receive ads personalized to their interests as well as the role of “persuasion techniques developed by advertology (sic)” to promote social change. While Asimov got the general idea right, he was wrong on the delivery channel for target marketing (he thought it would be television, having no notion of the Internet) and the evolution of political advertising (he thought it would be for the purpose of “battling ignorance and folly” as opposed to most political messages today that’d rather promote ignorance and folly).

Asimov was from a generation of SF writers who saw their avocation in part as to predict the future as a positive, better place to live. In the same article, Asimov conjectured that by 2000, “Energy will once more be relatively plentiful, and it will be used more wisely, we hope, by a world that has been taught by the events of these recent decades to cooperate for survival.” Good luck with that.

I was thinking about this after reading “Novelists Predict Future With Eerie Accuracy” by John Scwartz in The New York Times Sunday Review. He notes the range of predictions that have come to pass, ranging from Jules Verne staging moon launches from Florida to Arthur C. Clarke’s anticipation of satellite communications to Internet virtual realities envisioned by William Gibson and Bruce Sterling, two of the founding fathers of the cyberpunk movement in the 1980s. But he fails to distinguish between those like Asimov who hoped they were right in promoting a future enhanced by technological development and those whose extrapolations of global corporate and media trends led to more decidedly dystopic premonitions.

Alas, it seems as if the optimists who envisioned the twenty-first century as some sort of glittering technological utopia might have gotten some of the details right, but the award for getting right the overall picture of media and marketing malevolence goes to the more pessimistic cyberpunks. As the opening line of the archetypical cyberpunk novel — Gibson’s Neuromancer — describes it:

The sky above the port was the color of television, tuned to a dead channel.

Gibson delineates a world in which industry, technology, and mass media dominate human existence, but not in good ways that Asimov thought it might turn out. Certainly not one in which we’ve all decided to cooperate for our mutual survival.

Although, amusingly, one of the things that Gibson seemingly failed to predict is that the phrase “tuned to a dead channel” would radically change over the coming decades. If I now turn my television to a dead channel, instead of the classic “snow” field covering the screen, I instead get a brilliant bright blue … yielding an extremely different interpretation of that classic opening line.

It’s kind of depressing that all the optimism of science fiction authors from the 30’s and earlier is lacking in today’s crop. Most are about computers enslaving humanity, factories destroying the o-zone layer, or conquests of virtual worlds.

And a lot of the devices authors predicted are now a reality! The tablet computer, hydro-jet packs, portable music systems-even Wikipedia could be said to be a prototypical Hitchhiker’s Guide to the Galaxy. But people don’t use these to better their lives, they use them to be lazy. . . .

Where’s all the wonder and sense of adventure that science fiction authors envisioned?