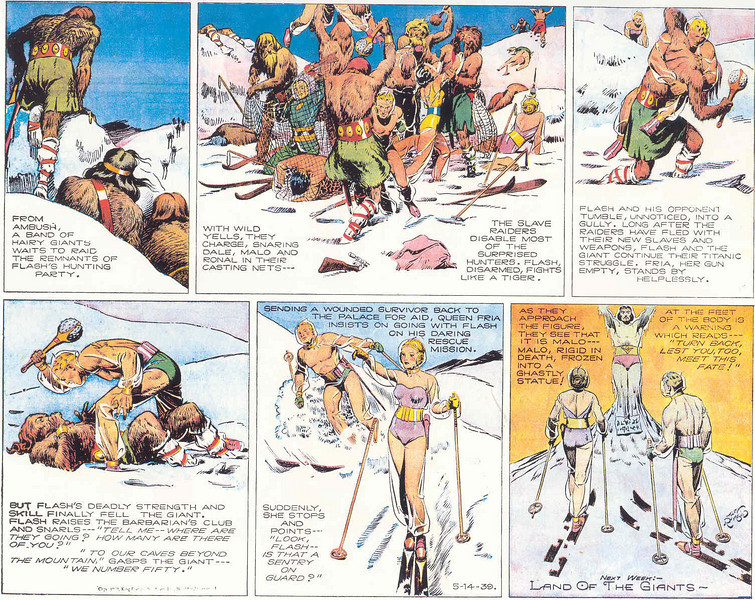 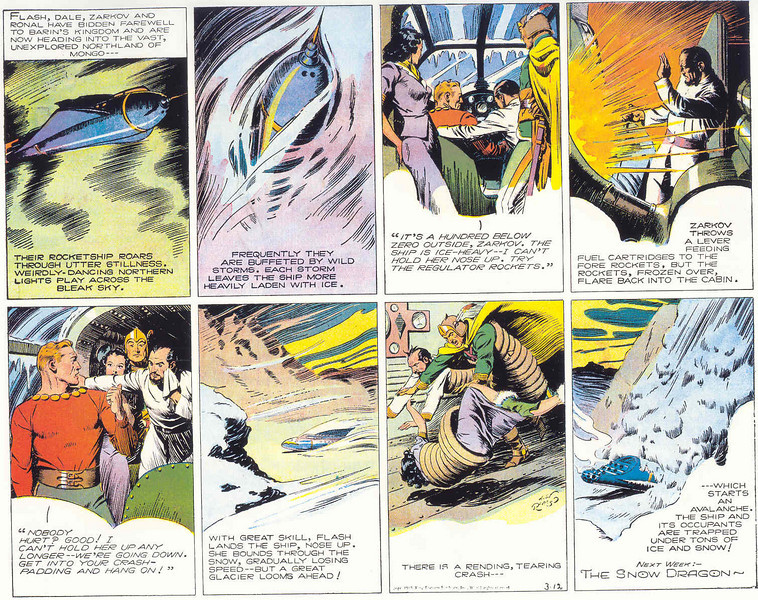 “The Ice Kingdom of Mongo” was the thirteenth installment of Alex Raymond’s Flash Gordon Sunday comic strip serial for King Features Syndicate. Originally published between March 12, 1939 and April 7, 1940, the epic-length “Ice Kingdom of Mongo” was the first story whose continuity lasted more than a year. “The Ice Kingdom of Mongo” picks up the storyline where the twelfth installment, “The Tyrant of Mongo” left off with Flash, Dale, Zarkov and Ronal rocketing their way to explore the frozen North. The freezing temperatures (100 below zero) cause their rocket ship to crash. While Zarkov and Ronal use heat guns to carve a shelter in the glacier, Flash goes off to hunt an ice bear for dinner unaware that a snow dragon is stalking him. Flash slays the snow dragon, but his shoulder is badly injured in the process. Ingeniously, he severs the dragon’s broad tail to use as a makeshift sled to transport the ice bear’s corpse and himself back to the glacier.

The four of them are quickly apprehended by Queen Fria of Frigia and her troops who are patrolling the area on skis. Taken captive, the group is set upon by a snow serpent. Flash saves the Queen from the monstrous beast and earns a place driving her snowbird-drawn chariot on the ride back to her palace. This earns him the enmity of Count Malo who turns off the heat to Flash’s bedchamber while he sleeps that night knowing that the freezing temperatures could kill him. Flash’s life is saved only by Zarkov’s timely arrival and superior medical knowledge. Determined to succeed, Count Malo disguises himself as Flash’s doctor and attempts to murder him in his hospital bed. Flash’s life is spared thanks to Dale’s intervention. Malo escapes with his identity still hidden from Flash and Dale.

His third attempt on Flash’s life occurs while a recovering Flash is getting some much-needed exercise in the pool with Dale. Count Malo again tampers with the heating mechanism causing the pool to instantly freeze. Flash and Dale barely manage to escape alive. While hunting snow oxen with the Queen’s hunting party, Flash saves Malo’s life from a ravenous ice worm. Ashamed of his actions, Count Malo confesses to his crimes and is stunned when Flash forgives him without demanding retribution. Of course, Malo’s comeuppance is close at hand as the hunting party fall prey to a tribe of primitive giants. Flash and Fria escape from their clutches, but Dale and Ronal are taken as slaves. While setting out to rescue them, Flash and the Queen come upon the frozen corpse of Count Malo which the giants have left behind as a grim warning. 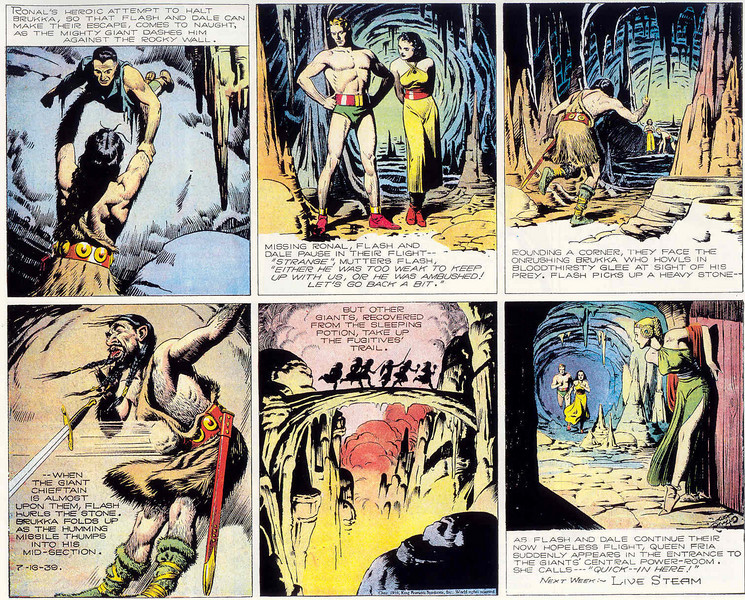 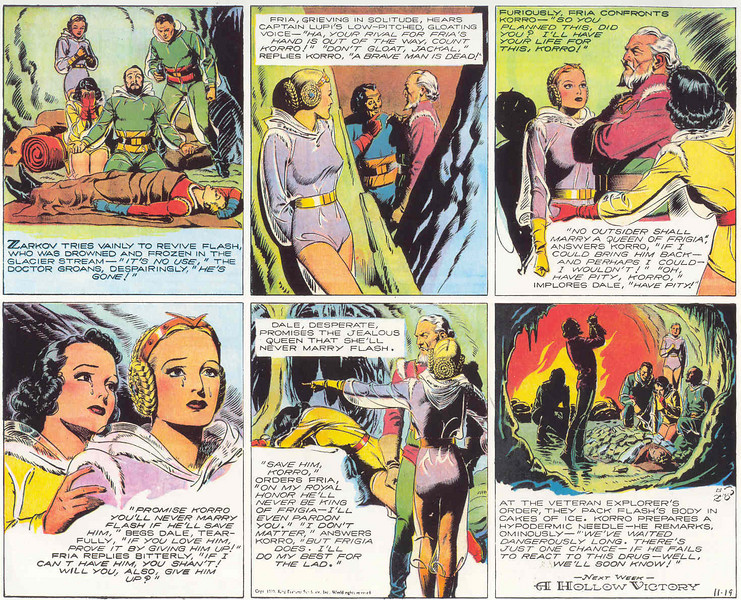 Flash and Fria manage to infiltrate the caves of Brukka, the brutal tribal chieftain. Brukka has taken Dale for his harem. Flash makes a foolhardy attempt to rescue her and ends up in Brukka’s dungeon awaiting execution with Ronal. Fria disguises herself as a slave and drugs the giants’ drink. Unfortunately, Brukka refuses to drink and when he sees his companions pass out, he flies into a rage and sets out to murder his servants. While Brukka butchers the innocent girls, Dale frees Flash and Ronal. Meeting up with Fria, Flash does his best to hold the giants at bay in the steam room while Dale, Fria and an injured Ronal escape through the chimney.

Reaching the outside at last, the trio realizes they cannot possibly survive in the unbearable cold. Unexpectedly, Fria’s snow bird lancers make a timely arrival. The Queen sends her lancers to put down the giants and rescue Flash from certain death. Fria then rewards Flash for his bravery by making him a Count of Frigia. A time of tranquility passes in Frigia where Flash basks in his newfound celebrity at court. His fame makes the famous explorer, Count Korro seethe with jealousy. The Count, like Dale, fears that Flash will become Fria’s royal consort. Korro invites Zarkov and Flash to join him on his expedition to hunt the Lovecraftian glacier monster that is terrorizing Frigia. Fria and Dale demand they be allowed to accompany the expedition. Don Moore’s script makes the most of the characters’ human weaknesses when the glacier monster traps them in a cave. Bit by bit, they start to turn on one another as jealousy drives Flash and Dale apart, compels Count Korro to grow ever more treacherous, causes Fria to resent Dale, and drives a wedge between Korro and his adjutant, Captain Lupi. 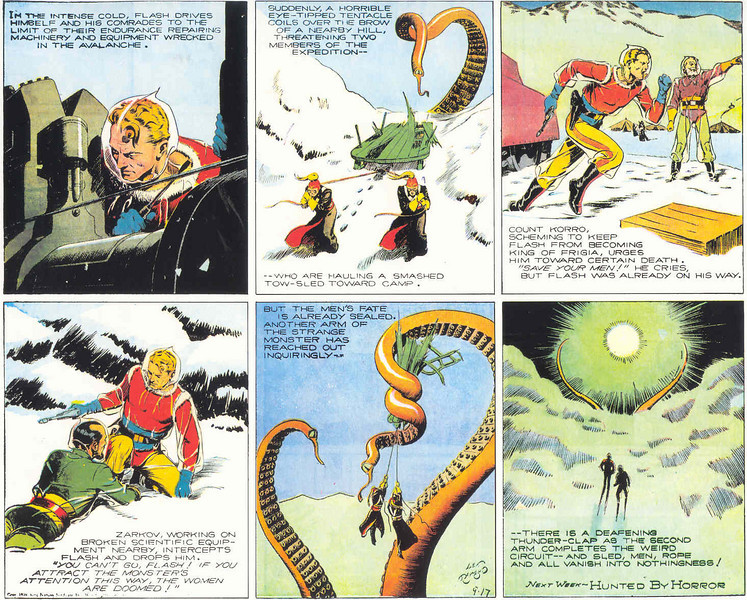 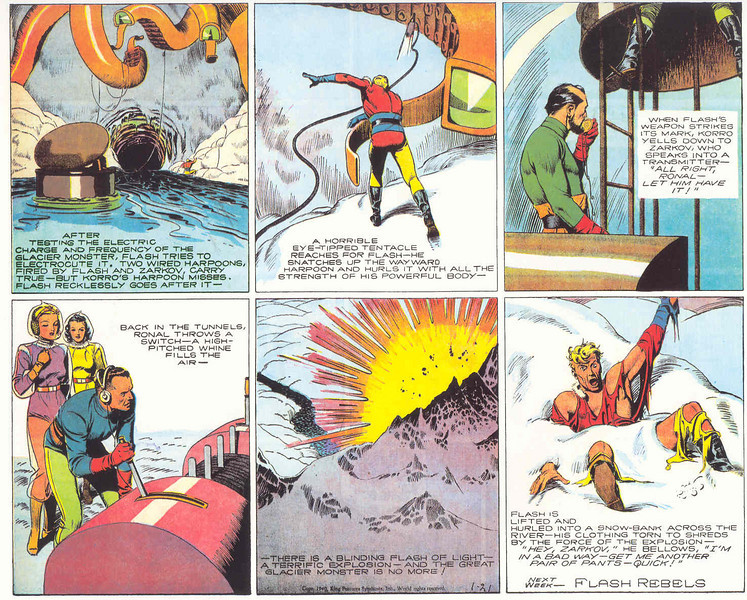 Flash tries and fails to slay the glacier monster on his own. He strikes his head on a rock and drowns. Upon recovering his body and examining him, Zarkov pronounces Flash dead. Queen Fria overhears a conversation between Korro and Lupi and realizes that Korro plotted Flash’s death to prevent him from becoming royal consort. She promises not to wed Flash if Korro revives him, but likewise forces Dale to swear she too will renounce Flash. Korro is as good as his word and uses Frigia’s superior medical skills to revive Flash. Korro and a recovered Flash soon join efforts to destroy the glacier monster. Ronal spies Lupi planning to cut the oxygen line to Flash and Korro’s underwater tank. The men struggle and plunge into the frozen river. Flash rescues Ronal, but Korro is devoured by the glacier monster. Finally, Flash, Zarkov, Korro and Ronal together are able to electrocute the creature by hurling electrified harpoons into its flesh while Ronal throws the circuit.

A triumphant welcome greets the hunting party upon their return to Frigia’s capitol. Flash is unable to understand why Dale has withdrawn from him and believes she is starting to return Ronal’s love for her. After saving Fria from an avalanche, the Queen proposes to Flash. He accepts and they kiss passionately. Count Korro is furious to learn of Fria’s plans until the Queen announces that she is abdicating to marry Flash. A furious Dale strikes Fria for her deception. Learning the truth of their vows to renounce him in order to save his life, Flash begs Dale’s forgiveness and tells Fria she must release him from his promise to wed her. Fria has Flash imprisoned for humiliating her at court, but after Zarkov reasons with her, the Queen agrees to release Flash provided the three of them leave Frigia immediately.

Stripped of his title, Flash says a fond farewell to the noble Ronal unaware that Major Garan of Ming’s secret service has tracked them to Frigia and captured Dale. Learning of her abduction, a daring pursuit by rocket sled through a blizzard follows. Garan succeeds in returning Dale to Mingo City while Flash and Zarkov’s sled crashes in the snow leaving the two of them injured and facing death from their exposure to the icy storm. Fortunately, they are rescued by a kindly mountain man who nurses them back to health. Flash learns that Dale is to be executed in two weeks if Flash does not surrender. He and Zarkov hijack a rocket train bound for Mingo City only to discover that Katon the engineer is only too willing to join the rebellion against Ming. This epic-length storyline ends with Flash, Zarkov and Katon on a seeming suicide mission bound for Mingo City in a stolen rocket train as part of Flash’s desperate attempt to rescue Dale.