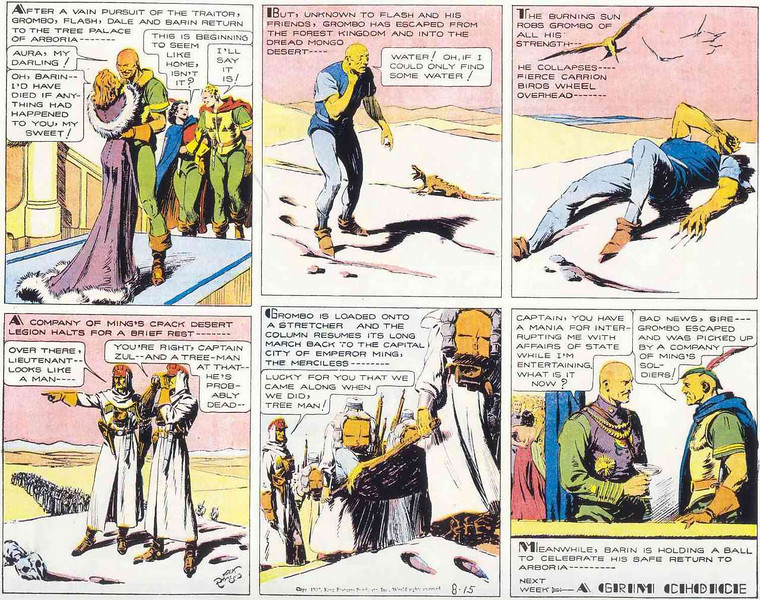 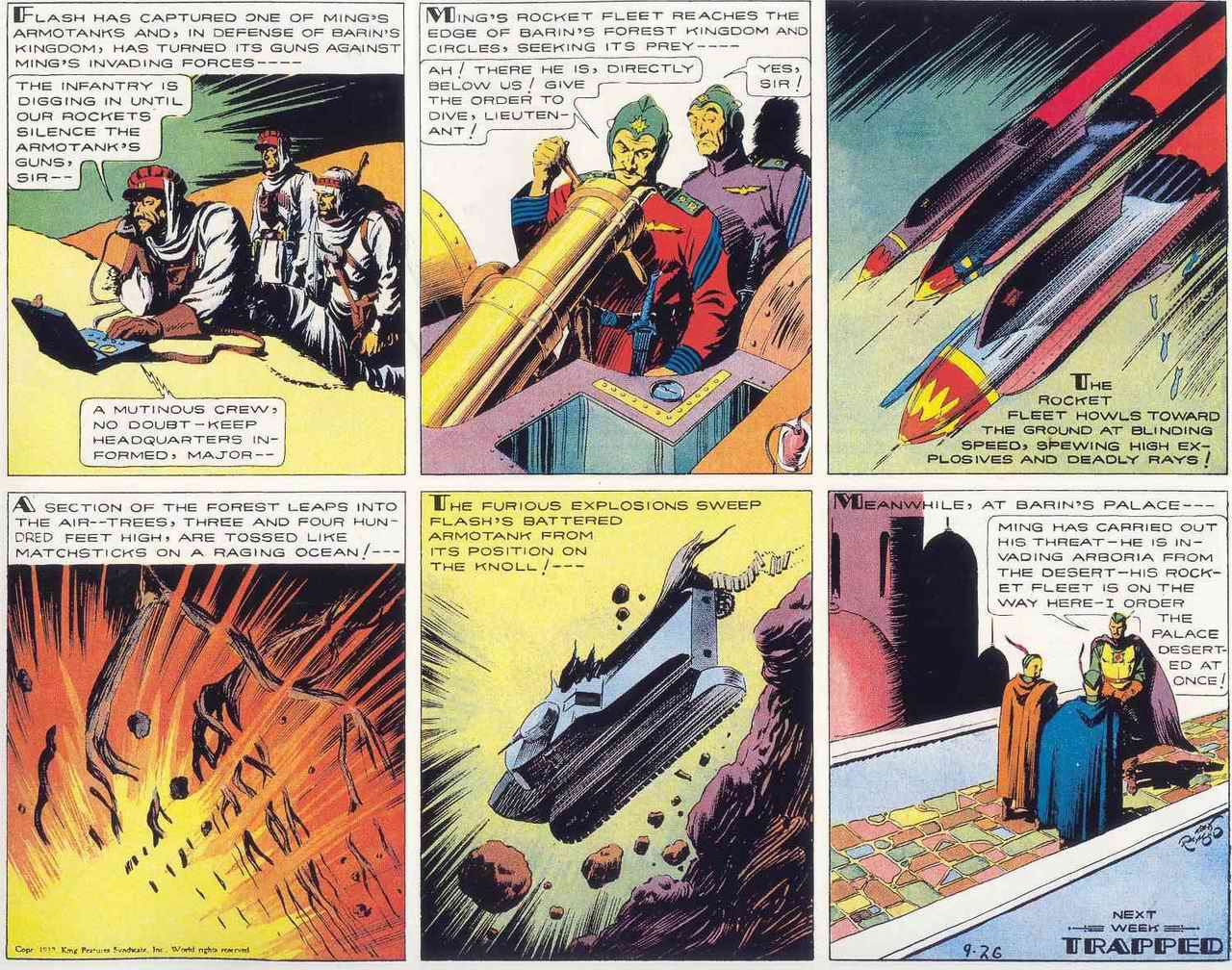 “Outlaws of Mongo” was the eleventh installment of Alex Raymond’s Flash Gordon Sunday comic strip serial for King Features Syndicate. Originally printed between August 15, 1937 and June 5, 1938, the epic-length “Outlaws of Mongo” picks up the storyline where the tenth installment, “The Beast Men of Mongo” left off with Barin, Flash and Dale returning to Arboria. The traitor, Grombo collapses while crossing the desert, but is saved from carrion birds by Ming’s Desert Legion. Ming rewards Grombo by appointing him a Captain. Ming confronts Barin and demands that he hand Flash and Dale over, Barin refuses. Fearing the situation will quickly escalate to a war that would devastate Arboria, Flash decides to flee to the jungles of Arboria so that Barin can report his escape to Ming. The Emperor, of course, demands Barin hand Dale over and when he refuses, Ming orders Arboria destroyed by his air fleet.

Don Moore and Alex Raymond’s stories were growing more complex and as a consequence, Mongo and its lands and peoples were becoming more detailed. The two also clarify the point that the kingdoms of Mongo are denied the technology that Ming’s forces command to ensure they cannot successfully revolt. Moore’s script also specifies that Barin views Flash as a savior who has come to Mongo to liberate its kingdoms from Barin’s tyrannical father-in-law. Flash stumbles out of the jungles of Arboria into the desert and discovers Ming’s tanks are rolling in. Flash singlehandedly commandeers a tank, overpowering the crew and turns its gun on the rest of the fleet as well as the infantry. Meantime, the air fleet has launched and is en route to bomb Arboria. 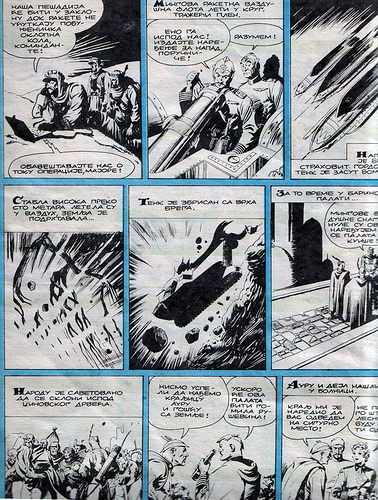 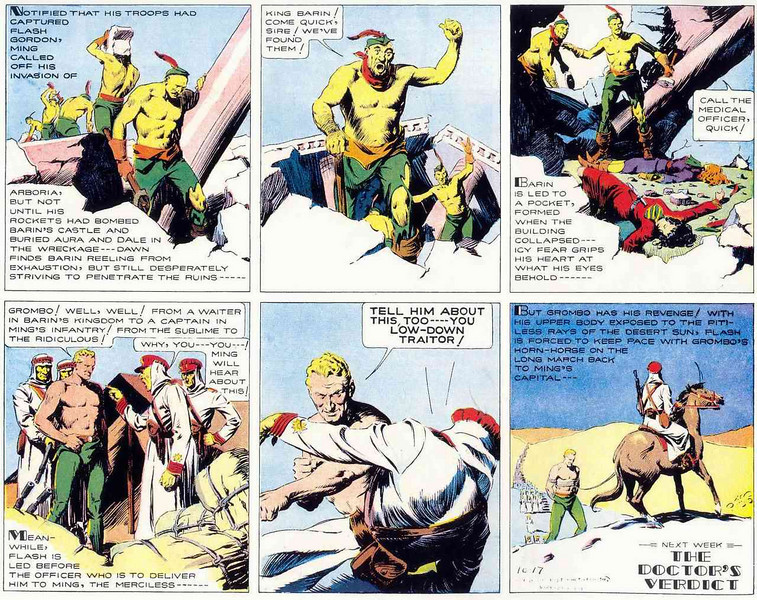 Barin orders the evacuation of Arboria. Aura and Dale remain behind helping to evacuate the hospital as Barin has unconscionably made no arrangements to help the infirm. While at the hospital, Dale discovers Zarkov and learns from Aura that his mind is gone and he’s been left in a vegetative state. The air strike demolishes Arboria leaving Dale and Aura trapped with the helpless patients when the hospital collapses. The tank Flash commandeered is also bombed. An unconscious Flash is captured by Ming’s infantry led by Captain Grombo. Barin and his men clear the rubble and find the unconscious bodies of Aura and Dale. Recovering his senses, Flash strikes Grombo who has him dragged through the desert by horse as punishment.

Dale and Aura recover consciousness. Fortuitously, the heat from when he was trapped beneath the rubble breaks Zarkov’s brain fever, restoring his sanity. Barin learns from Ming that hostilities with Arboria have been called off now that Flash has been captured. Aura conspires with Dale and Zarkov to return to her father’s palace to liberate Flash without her husband’s knowledge. Meantime, when Ming learns Captain Grombo risked Flash’s life dragging him through the desert, he strips him of his rank and sentences him to six months of hard labor. Flash is hospitalized with heat stroke. Meantime, his rescue mission goes awry when Aura, Dale, and Zarkov are lost in the desert and Zarkov, not yet fully recovered, collapses from the heat.

Aura, Dale, and Zarkov are captured by desert slave traders, but are released when the slave traders learn they are companions of Flash Gordon. Further developing the Flash Gordon as Mongo’s savior angle, the slave traders have never heard of Queen Aura of Arboria, but know of the legendary Flash Gordon and are only too happy to escort them out of the desert. Meantime, Flash is beginning to recover as Emperor Ming’s patience wears thin. A freak accident causes a power outage at the hospital. Flash saves his doctor from electrocution and attempts to escape, but is soon recaptured. Dr. Bono grows more sympathetic toward Flash as each day passes. Meantime, Aura, Dale, and Zarkov are captured by a farmer on the outskirts of Ming’s palace.

The farmer, Luco brings the trio back to his house. Upon learning they are friends of Mongo’s promised savior, Flash Gordon, the farmer’s wife prepares a home-cooked dinner for them and then drives them to Mingo City in his truck. Aura is granted a private audience with her father to plead for Flash’s life, but he refuses her and has her escorted by royal guard back to Arboria. Luco helps raise a commando raid to liberate Flash, but they are cut down by Ming’s guards with only Zarkov, Dale, and Luco surviving. The trio escapes to the armory while Flash is led through the streets of Mingo City on his way to his execution.

A daring rescue attempt in a stolen armored car nearly succeeds, but is thwarted by Ming’s guards and Zarkov, Dale, and Luco are fortunate to escape with their lives. Just as Flash is to die in the electric chair, Dr. Bono slips him a pill which sends him into a cataleptic state. Dr. Bono halts the execution after only one volt has gone through Flash and pronounces him dead. Ming gleefully announces that the rebellion has been quashed as Flash is carried to a magnificent marble tomb. That night, Dr. Bono gives Flash an injection to bring him out of his cataleptic coma (a concept borrowed from Sax Rohmer’s Fu Manchu stories). A grieving Zarkov and Dale make a pilgrimage to Flash’s tomb bearing wreaths only to discover the inscription “Here Lies Flash Gordon” has been defaced with graffiti and now reads, “Ming Lies! – Flash Gordon” as Zarkov and Dale rejoice that Mongo’s savior has risen Christ-like from the grave. 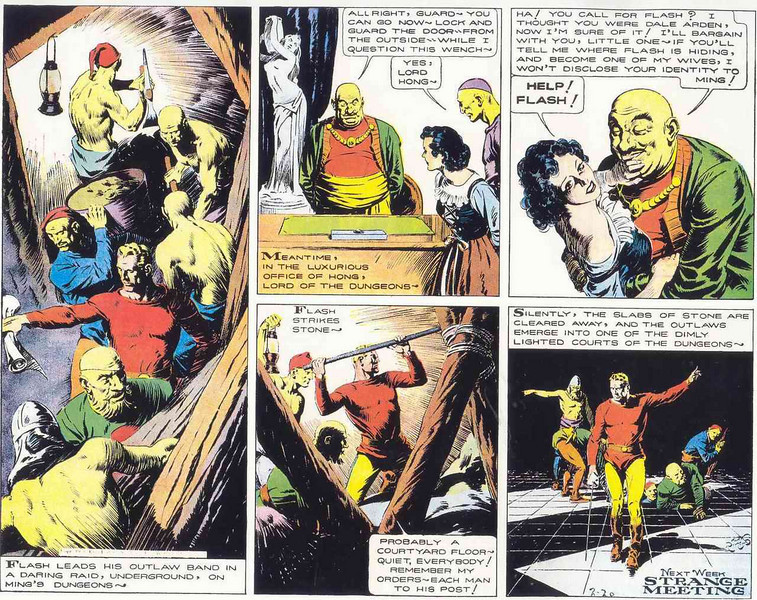 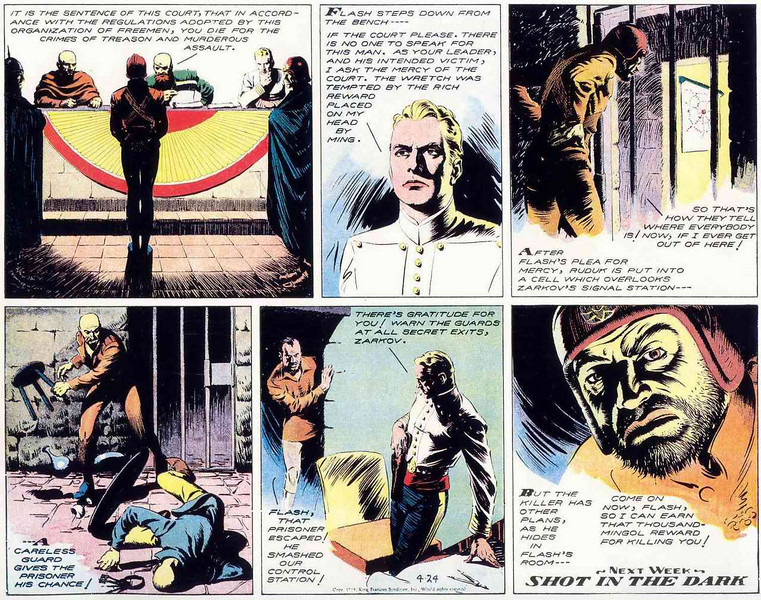 When Ming learns of Flash’s ruse, he orders a house to house search for Flash and Dr. Bono as the city is cordoned off. The fugitive pair is taken in by a rebel, Kugor who leads them to the abandoned sewer system where an outlaw band gathers to eagerly welcome their savior, Flash Gordon. Meantime, Zarkov and Dale are arrested by Ming’s patrols and imprisoned as outsiders (Caucasians do not exist on Mongo where all humans resemble Asians). Count Bulok, leader of the outlaw band plots with Flash to tunnel into the jails and free all of Ming’s prisoners to aid their rebellion. Meantime, the jailer, Hong takes a fancy to Dale and has him brought to his office where he attempts to rape her.

Hong recognizes Dale as Flash’s companion, but intends to take her as one of his wives rather than turn her over to Ming. Flash and the outlaw band break into the armory and set about freeing the prisoners. Flash saves Dale from the lecherous Hong. Alex Raymond introduces Count Bulok’s sister, a femme fatale named Sonja (whose personality mirrors Aura before marriage made her respectable) who had been imprisoned because of her brother’s political views. Flash quickly takes charge of the rebellion. A trap is set in the prison as Flash leads rebels and prisoners to retreat to the sewers. When Ming’s soldiers enter the prison, it detonates a bomb that destroys the prison and decimates Ming’s squadron.

That night, Flash and Dale get into an argument over Sonja’s constant advances. The following day while Flash holds a council of war with the rebel leaders, Zarkov intercepts a transmission on Ming’s military radio frequency and learns their hiding place has been discovered. Ming’s troops mobilize quickly to raid the sewer system, but Zarkov dynamites the entrance as our heroes once again utilize terrorist tactics against the superior military might of the establishment. During the victory celebration, Dale walks in on Sonja and Flash kissing passionately unaware that Sonja had seen her approach and that Flash was caught off guard by her unexpected pass.

While Dale rushes off in tears, Sonja does her best to seduce Flash. The celebration is short-lived as Zarkov’s security cameras pick up another raid on the sewer system and he fears this time they are cut off. Flash commands a gunner to a tank they have stolen and turns it on Ming’s troops. The Emperor orders the retreating soldiers cut down for their desertion. Flash welcomes Ming’s renegade soldiers into joining the rebellion. Dale confronts Sonja calling her a hussy. Flash demands she apologize to Sonja and her brother for her rude behavior, but Dale refuses. That night, one of the new recruits from Ming’s army plots to murder Flash in his sleep, but Dale spies his approach and warns Flash in time after which the quarreling couple reconcile.

At this point, the outlaw band of rebels is given the title, the Freemen. Count Bulok sentences Flash’s would-be assassin to death, but Flash yet again pleads for imprisonment instead of death. As we have seen before with Grombo, the prisoner Ruduk whose life Flash spared, escapes from his cell, sabotages Zarkov’s monitoring equipment, and lies in wait to assassinate Flash. He shoots the first person to enter Flash’s bedroom which, as luck would have it, is Sonja. Flash follows on her heels and guns down Ruduk. Sonja’s wound is not life-threatening but Flash and Dale fall out yet again when Dale learns Sonja was shot as she entered Flash’s bedroom. Just then, the alarm is sounded for Ming has decided to flood the sewers to flush the Freemen out.

Flash quickly quells a rebellion among the Freemen and leads them on another terrorist mission to plant charges around the rapidly flooding sewer system. Don Moore’s scripting and Alex Raymond’s artwork develop the tension nicely with the reader unsure of the outcome as the sewer system is completely flooded while explosives and flammable gas is released to route Ming’s men. There is a tremendous explosion. A great number of Freemen appear to perish in the blast which also topples portions of Mingo City, but Flash, Dale, Zarkov, Bulok, Sonja and several others escape to the river above them and swim to a nearby island where they find themselves in the Royal Mausoleum where Ming’s ancestors have been laid to rest as the first of Raymond and Moore’s epic storylines ends with the promise of further adventures to come.