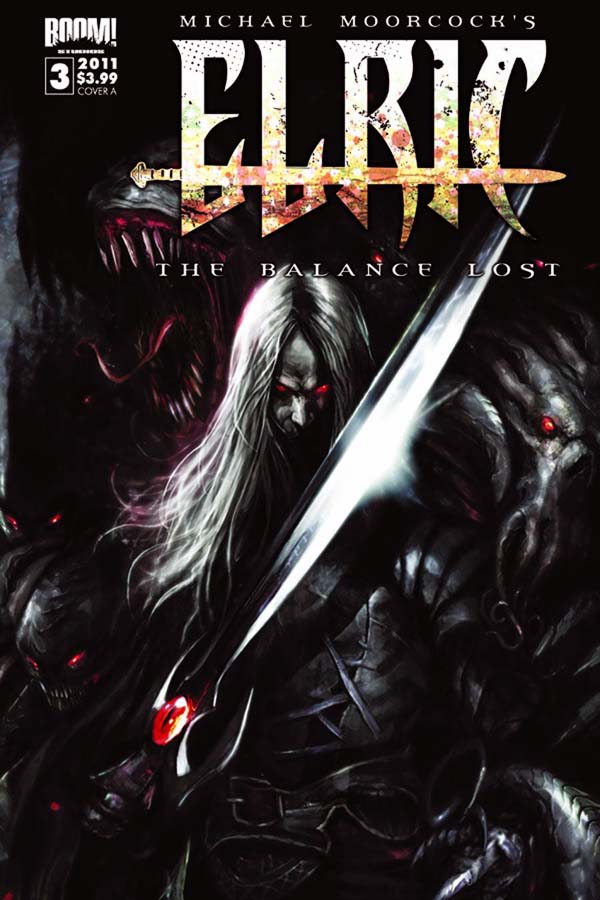 When I heard that Boom! Studios was putting together a new series starring Michael Moorcock’s most beloved and iconic character Elric of Melnibone, I was instantly on board. Especially when the Free Comic Book Day preview was released. Lo and behold! Great art by Francesco Biagini was just what the Prince of Ruins needed to bring him to life in a new comics venture!

So I jumped on board when the first issue of ELRIC: THE BALANCE LOST hit the comics stands, and I was pleasantly surprised that not only was the art fantastic, but the writing is good as well. Chris Roberson does a nice job filling Moorcock’s shoes, throwing multiversal concepts around with great abandon. Great art. Great writing. What’s not to like?

Here’s the problem: ELRIC isn’t really an ELRIC comic. We’re three -and-a-half issues in and we’ve gotten only about one issue’s worth of Elric story time (if that). The trouble with this new book is that it should be called Michael Moorcock’s ETERNAL CHAMPION because every issue is divided between the ongoing (and apparently unrelated!) stories of Elric and several other Moorcock creations: Dorian Hawkmoon, Corum Jhaelen, and Eric Beck (?). Only those who are familiar with Moorcock’s body of non-comics fiction will have any idea that each of these characters is a variation or facet of the Eternal Champion–the hero that exists in all realities at once.

Instead of featuring Elric of Melnibone as its main character, we get a melange of four different stories–a blend of science fiction, steampunk, alternate history, and a smidgen of sword-and-sorcery. “What’s wrong with that? Sounds like a nice blend!” I hear somebody asking in the back row. The problem isn’t in the concepts, it’s in the execution.

I don’t think I’ll be alone when I say a book entitled ELRIC should be primarily a sword-and-sorcery book. It should also be ABOUT THE TITLE CHARACTER. Sure, guest stars are always fun, but this book doesn’t feature Corum, Hawkmoon, and Beck (who is this boring-ass guy?) in supporting roles or guest-starring roles. Instead, each one of these characters gets basically equal time. Oh, did I mention that each one is in an ALTERNATE REALITY that has little or nothing to do with the other worlds or characters, except a few passing similarities (alternate versions of New Orleans, for example).

As a longtime, diehard Elric fan (ask anyone who knows me), this isn’t the book I wanted. This isnt’ an Elric book. It’s an Eternal Champion book.

Yes, the art is amazingly good. Yes, the writing is capable and inventive. But for the sake of all the Lords of Chaos, how about giving us more ELRIC time? I can only speak for myself and the other Elric fans that I personally know, but I don’t want a science-fiction steampunk story when I pick up an Elric book. I want Elric and Stormbringer and Moonglum and Tanelorn and Arioch and the Young Kingdoms. What I get from each issue of Boom!’s ELRIC: THE BALANCE LOST is one-quarter of a story times four.

So be aware if you’re considering this comic or the eventual trade collection: This isn’t really an Elric book. He’s only one-fourth of the cast. This is not a sword-and-sorcery book. It’s more like slipstream steampunk sci-fi. You won’t get your “Elric fix” from this book. You’ll only get a few cool scenes that make you hungry to go back and read the ACTUAL Elric books. (You know, the ones with stories ABOUT and STARRING Elric?)

I can only hope that these four simultaneous stories weave together eventually into a cohesive whole. But if I don’t get more ELRIC in my ELRIC comic, I won’t be reading it long enough to find out.

“Hey! You got your Hawkmoon in my Elric!”

“You got your Elric in my Corum!”

“Who the hell is Eric Beck and why should I care?”

If I remember correctly, there is a character called Ritter von Beck in The Warhound and the World’s Pain – one of my favorite Moorcock books. Possibly a relation?

I keep hearing that the Skrayling Tree trilogy is also more about the Multiverse than about Elric. (haven’t read them myself)

As you say – false advertising.

I’m not just a fan of Elric but a fan of the entire Eternal Champion series, and all of Moorcock’s works really. Have you not read Corum, Hawkmoon, and so forth? Great works. Sometimes better than Elric, sometimes not.

I could sum up my thoughts on the comic rather easily: The art is not to my liking. Enough so that I’m not reading the comic. I don’t like the style or the execution.

Oh, it’s not the best Elric one, but it’s a good one. Neat how he’s going on his theme of when Law or Chaos “Wins” on a world the world “Loses”. Chaos worlds first become monster nightmares but then turn ashen since all possibilities are explored, all energy dissipated. Order worlds become paragons of virtue and prosperity, imagine Camelot at it’s height, but then “Crystallize” with literally no movement possible since movement/life is chaos.

So I was planning to pop into my local comic shop and see if they had this, or whatever else.

I heard Moorock was trying to rekindle his Elric character, but I thought he was going to publish more stories, in prose, written by himself you know…

There is a shit ton of ‘unnecessary’ Eternal Champion merchandise out there.
I’ll bet I put this on that shelf overburdened shelf.

Just to clarify my position: It’s not a BAD book at all. It’s just not an ELRIC book.

Kinda like if Peter Jackson called his LORD OF THE RINGS movie THE GREAT BOROMIR.