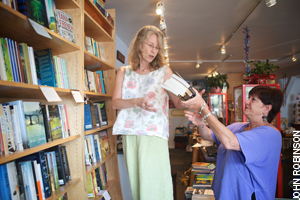 Further news on the plight of the physical bookstore front.  Berkeley’s Serendipity Books is closing. Man, if a bookstore can’t survive in Berkeley, where can it?  Well, one place is Charlottesville, VA, which I chose to move to in part because of the plethora of bookstores.  But even here in this cultural mecca that shades blue in otherwise red  territory, bookstores may not survive the retirement or demise of their owners.

In related news, Criminal Records, one of Atlanta’s largest non-chain music retailers whose owner was involved in forming Record Store Day, a nationwide event to increase awareness of and traffic to independent record stores, is expected to close by November, barring some benefactor.  Eric Levin blames the economy, not digital downloads or box stores, but it would also seem he missed the class about paying your taxes.

Speaking of the demise of physical presence, Michael Hart, who is credited with creating the first e-book forty years ago by typing the Declaration of Independence into a computer on, you guessed it, July 4, has died.

If you can, go out today to your local bookseller/record store and buy something.  Do your bit to get the economy going. Exactly how someone is supposed to help you get your personal economy going, I’m not sure, but a good book or record can at least make you feel better about not being able to buy other stuff you can’t afford.

When Borders up and closed I did my best to make a few extra purchases, but it is hard these days. Their 10% deal wasn’t much to get excited about either. . . .

Soyka: Are there any books worth buying in your Virginia bookstores? The few places around here have nothing but Tom Clancy and Danielle Steele. 🙁

Click on the link for the article on Charlottesville bookstores. Daedalus my have a Tom Clancy or two, but are more than likely to also have Moorcock or Keats or Churchill or some guy you never heard of that once you read it are amazed that you hadn’t. There are at least five used bookstores within walking distance of one another that have similar variety.

When Borders closed, I raided it for some last purchases.

Then I went to the nearest Barnes & Noble.