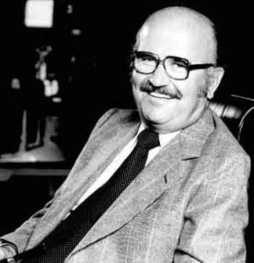 I know, I know.  You’ve never heard of Elwy Yost.

But you probably didn’t grow up in Ontario in the late 70s and early 80s. Those who did knew and loved Elwy Yost.

Elwy Yost was the host of TVOntario’s Saturday Night at the Movies from 1974–99 and, more importantly to me, the half-hour weekday show Magic Shadows, from 1974 until the mid-80s.

When I was 12 years old in 1976, my after-school ritual was well-established. Walk home from Sir Wilfred Laurier High School, finish homework, eat dinner, and then stretch out on the living room floor, lying on my stomach with my feet in the air, to watch Magic Shadows.

Magic Shadows presented classic Hollywood movies, cut into half-hour serials and introduced by Yost with erudite and infectious enthusiasm. Best of all, Yost had an unapologetic fondness for the occasional monster movie, including King Kong, Gorgo, and others. On those weeks when the main feature would wrap up by Thursday, Friday would feature an episode of a true film serial like The Adventures of Captain Marvel, Mysterious Doctor Satan, or Captain America.

For those who do remember, here’s the animated intro to Magic Shadows on YouTube, and a sample of classic Yost as he introduced the 1954 Marlon Brando pic Desirée. Watching these two clips brought me right back to the late 70s. [Thanks to my friend Todd Ruthman for sending them my way.]

In later years Elwy Yost was overshadowed by his son, Graham Yost, who moved to California to become a screenwriter (Speed, Broken Arrow) and writer/director (of the HBO miniseries The Pacific). Speed was the last movie Yost hosted before retiring from Saturday Night at the Movies in 1999. Elwy Yost wrote Magic Moments from the Movies and two young adult novels, Secret of the Lost Empire and Billy and the Bubbleship, and a mystery novel, White Shadows.

I would develop a lasting fondness for pulp fiction when I discovered pulp magazines later in high school. But it was Elwy Yost who showed me that the best adventure fiction — yes, even monster movies — deserved to be preserved and studied with the same loving attention as the finest cinema. He was a man who loved film, and who communicated that love to an entire generation of young Canadians.

I miss him already.

I remember Elwy Yost; I remember watching The Adventures of Captain Marvel and the black-and-white Hollywood adaptation of Julius Caesar when I was very young. Like you, Magic Shadows was a part of my childhood. That link to the theme is great — it was wonderful to see the animation again, very Yellow Submarine/Terry Gilliam.

Thanks for writing this.

With Yost’s death, I can’t help but feel the passing of another aspect of my childhood: the hosted monster movie. I sure loved to watch Saturday afternoon monster double features, MAGIC SHADOWS, and other shows where colorful guests would introduce old creature features, and give viewers a little context. Elwy Yost had a lot more class than most.

This is the first I’ve heard of Elwy Yost, but I have some small inkling of what he gave you.

Down in the US, I grew up watching Matinee at the Bijou, which recreated the all-day marathon, mixed-genre viewing events that used to be normal cinema fare in the 1930s and 40s. That was when I came to understand why Tarzan and Flash Gordon were cool–and they were so much cooler in black and white than in their later campy remakes. Singing cowboys, cartoons, newsreels, intergalactic rockets, and weepies all piled up together.

I suppose it was the film equivalent of those old spinning wire racks at the drug store that mixed every sort of paperback on the market.

It’s such a gift, to be invited into the dreams and diversions that sustained our forebears. It’s something that a younger generation can’t give itself. You need somebody who was there to teach you how to see, if you even want to come close.