After Odysseus, famed warrior and inventor of the Trojan Horse (the original wooden one, not the one you can pick up from questionable internet sites), left behind the Island of the Lotus-Eaters, he sails on to a far more dangerous location: the Island of the Cyclops. 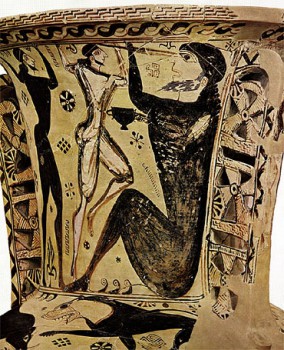 Whatever. The island where a bunch of one-eyed cannibalistic giants live.

Unfortunately for Odysseus and his men, they don’t realize that they’ve staggered out of a naval adventure movie and into a horror flick. All they know is that they arrive on shore, starving and desperate for shelter, and find a giant cave stocked with cheese, and only a complete monster would object to starving, desperate, lost travellers eating. Right?

They’re in for a shock when Polyphemus returns. He not only objects, he turns around and eats two of Odysseus’ crew members (thus proving that the Red Shirt trope is older than dirt). Odysseus objects to this, claiming that it is wrong to eat one’s guests. Or anyone, for that matter. Polyphemus responds that since Odysseus is his guest, he will give him the gift of eating him last.

The horror of this scene comes from not one but two strong taboos being broken. The first and obvious is the Cyclops’ cannibalism. But the ancient audience would have been at least as disturbed by the violation of the laws of hospitality. It’s hard for us, in an age of hotels, motels, and homeaway.com, to understand just how deeply ingrained the relationship between a host and a guest was in the ancient world. As a parallel, in the Illiad, two characters meet on opposing sides of the battlefield and discover that their grandfathers had been guest and host once. Rather than remarking that it was a tragedy that they would have to kill each other, they traded armor so that they would never run the risk of killing each other by mistake. In order to understand the revulsion Homer’s audience would feel at the suggestion of a host EATING one of his guests, we’d have to reach for an analogy like our own reaction to pedophilia. It was that strong a taboo.

So we know right away that Polyphemus is a monster. Like all great monsters, he shows us what we are as supposedly civilized people by being what we are not. The Cyclopes, Homer tells us, don’t eat bread (that is, they don’t have agriculture), don’t live together in communities, don’t have laws, don’t offer sacrifices to the gods, and, clearly, don’t mind a meal of human flesh now and then. 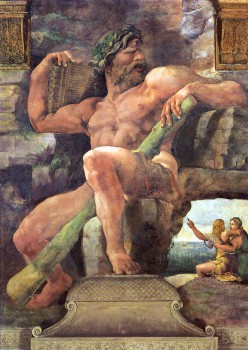 What makes this episode great story-telling (and popular with High School teachers everywhere) is that it also perfectly demonstrates what kind of man, and what kind of hero, Odysseus is. Trapped in a cave with a giant with a hankering for long pork, he resorts to his wiles. He tricks Polyphemus (who has never had a drink before) into getting so drunk that he passes out, then gouges out his eye with a telephone pole.

Why not just kill him outright? Here’s the trick: Polyphemus keeps his cave locked with a giant boulder so large that none of the humans can move it. But he lets the sheep (who sleep in the cave with him at night) out every morning to pasture. So Odysseus and his men strap themselves underneath the sheep and ride out to safety.

Odysseus is a different kind of hero: he’s fearsome on the battlefield but his primary strength is his cunning. He’s so wily, in fact, that he attracts the attention of the goddess Athena, the patron of wisdom and warfare.

But he’s also his own worst enemy. His arrogance, his curiosity, and his inherent smart-assery prove time and again to be his (and his men’s) undoing. In the case of his encounter with the Cyclops, he waits until he is out of Polyphemus’ reach before taunting him. The Cyclops then calls down the wrath of his father, the god Poseidon.

Since the only way Odysseus can get home is by sea, this is particularly bad luck.

In this quality, Odysseus is the forerunner of the classic rogue. Han Solo, Harry Dresden, Mal Reynolds: tricksters all, and Homer’s hero is one of their granddaddies. 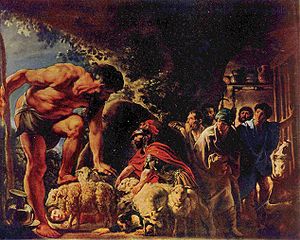 Next up: Odysseus messes with the weather and learns that, like the Cyclops, he should have slept with one eye open. (Can I get a rim shot? Anyone? Is this thing on?)

Great article! I’ve been interested in Greek mythology since about 1959. That’s why I decided to us “mythicals” in my own stories — flavoring them with a 1930s, Warner Bros gangster-film attitude.

Can’t wait to read your next article, Elizabeth!

I’m totally loving these. I tell all my Facebook friends. 🙂

Thanks guys! I’m having fun writing them, and I’m glad you’re enjoying them as well.

My own mythology obsession goes back to at least second grade when someone got me a copy of “D’Aulaire’s Book of Greek Myths”. To this day, in my head Zeus looks vaguely like Richard Chamberlain.

Long time reader, first time poster!
I’m the co-writer/producer (and Odysseus) of a new musical called CYCLOPS: A ROCK OPERA that premiered in LA earlier this year, and which is now opening in NYC at the New York Musical Theatre Festival (tickets went on sale today, so I was pretty shocked to see this post). It’s a rock n’ roll adaptation of an old Euripides “Satyr Play” (the only fully existing one, actually) that borrows this episode for its plot — if you’re into The Odyssey (or Fritz Leiber for that matter), you’ll enjoy this show immensely. We open on September 29th and tickets are available at http://www.nymf.org/cyclops — if you’re in the New York area, come check it out!