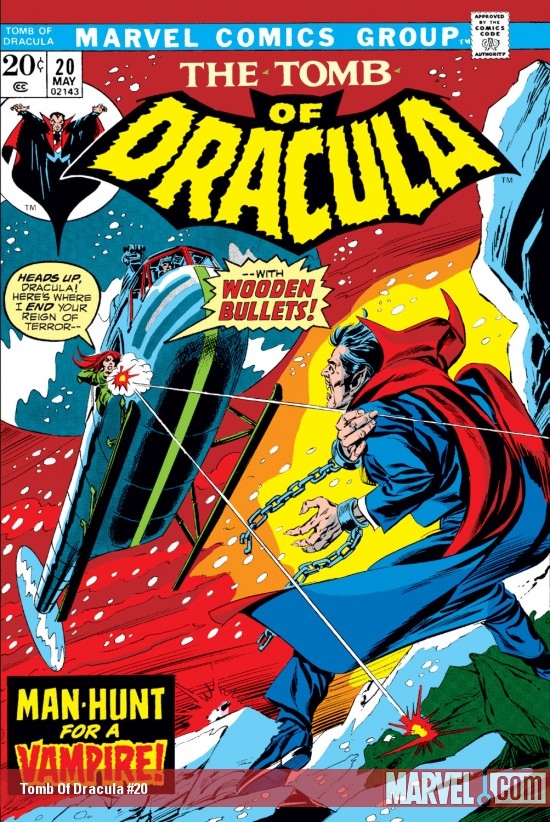 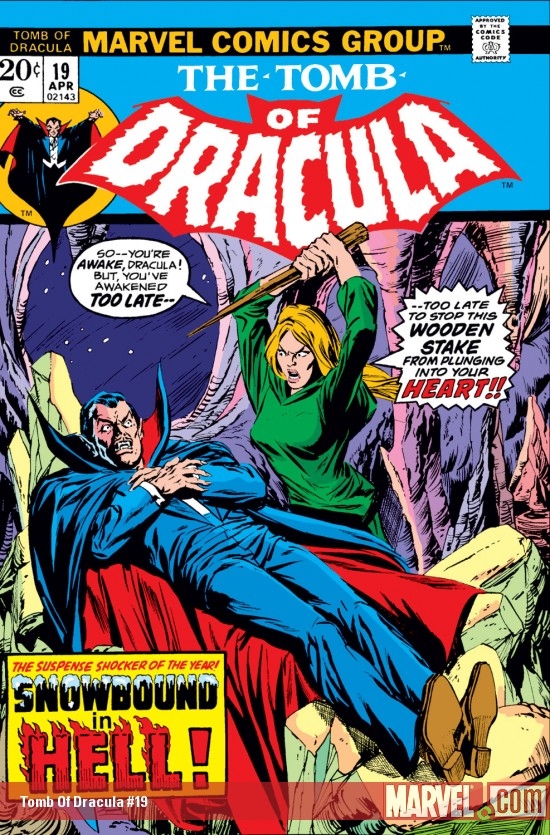 The Tomb of Dracula # 19, “Snowbound in Hell” is a sentimental favorite for me. This was the unlikely choice for Power Records to package with a 45 RPM record dramatizing the story, but it gave me my first taste of the series as a kid. This issue is a great character study with a snowbound Dracula and Rachel Van Helsing battling the elements to survive after their helicopter crashes in the frozen Alps. The ongoing subplots continue to build toward future storylines with Dr. Sun (still unseen) putting the vampire Brand through his paces while Quincy Harker learns Blade’s secret immunity to vampire bites. The story’s finish has Frank Drake successfully rescuing Rachel just seconds before she is about to fall victim to a starving Dracula who has been keeping her alive as a blood reserve. A nice change of pace issue that works well in developing the characters while advancing toward the inevitable showdown with Dr. Sun.

Issue 20, “The Coming of Dr. Sun” has Frank and Rachel hunting Dracula across the Alps by helicopter. Rachel reveals her traumatic childhood encounter with Dracula when he murdered her parents as part of his vengeance against the Van Helsing family. She reveals how Dracula was about to kill her until Quincy Harker’s timely arrival saved her. Dracula is captured by Dr. Sun’s minions who bring him to a secret hideout where Dr. Sun is revealed as a disembodied talking brain floating in a fish tank straight out of a 1950s B-movie. Clifton Graves survived the explosion aboard the ship and has been stitched back together and physically augmented by Dr. Sun. Graves attacks Dracula. Frank and Rachel stumble into the hideout and Graves is inadvertently killed by Rachel when she fires her crossbow at Dracula. The issue ends on a cliffhanger with Dracula, Frank and Rachel held captive by Dr. Sun. 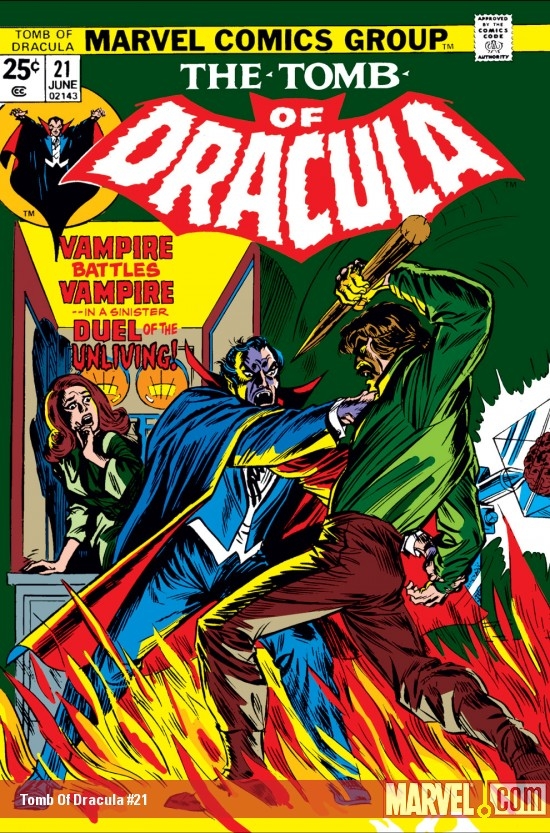 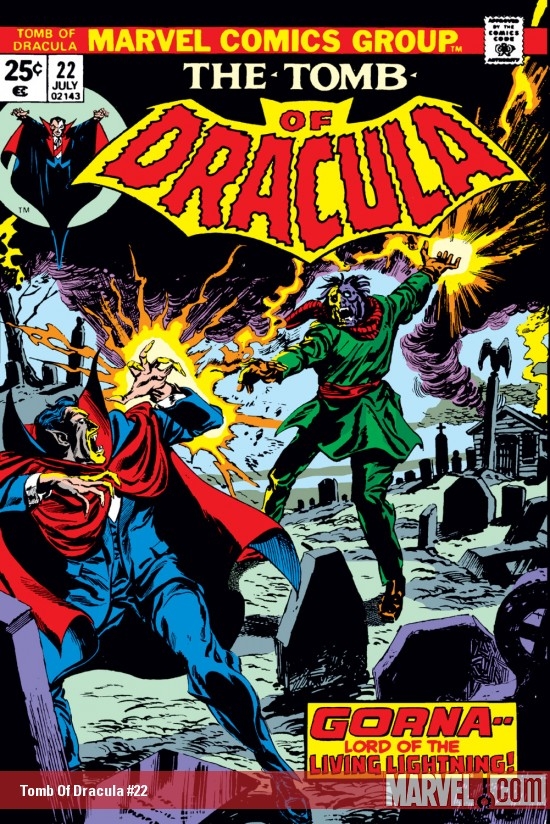 Issue 21, “Death-knell” is the long-awaited finale to the Dr. Sun storyline. Sun’s origin as a Chinese scientist who fell victim to a twisted Communist plot to create a super-brain is revealed via flashback. Dr. Sun finally pits Brand against Dracula for a vampire battle royale. The ongoing subplot sees Blade break from Quincy Harker’s vampire hunters to resume his vampire hunting on his own. Dr. Sun successfully drains off some of Dracula’s powers and gives them to Brand, but it makes the vampire biker unstable and he turns on Dr. Sun. The evil doctor uses a matter transporter to teleport to safety while setting his base for self-destruct. Dracula, Frank and Rachel escape before the base explodes, leaving Brand to finally perishes for good.

Issue 22, “In Death Do We Join” is an interesting filler issue that takes Dracula behind the Iron Curtain to a small Moldavian village plagued by vampires. Rachel and Frank are reunited with Quincy in a brief interlude referring to events chronicled in Giant-Size Chillers #1 involving an attack on Quincy by Dracula’s daughter and Taj’s decision to leave the vampire hunters and return to his native India. This issue is an effective ghost story. Part of the story’s strength is, along with Gene Colan’s consistently impressive artwork, the little touches of small town life and hypocrisy that Marv Wolfman imbues in his script. There is an everyday quality to characters whose lives seemed quite foreign to most of the readers who lived far from the Eastern Bloc that helps give the story a universal appeal. 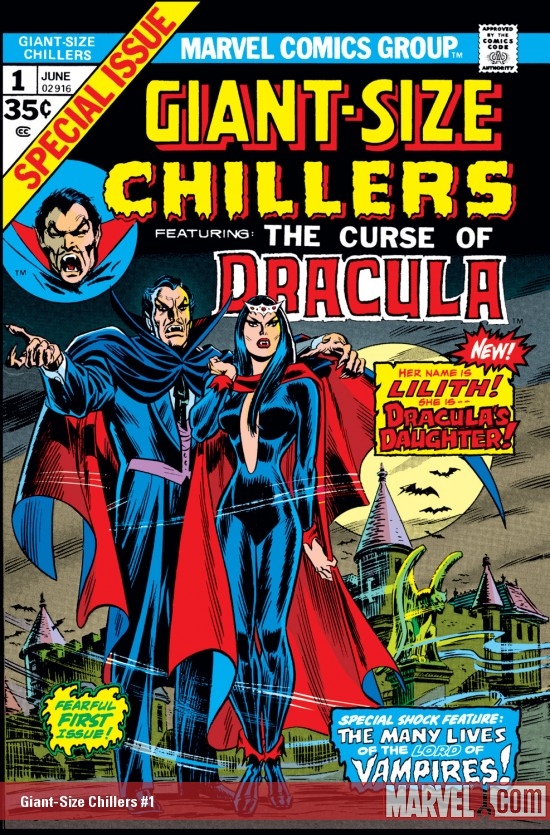 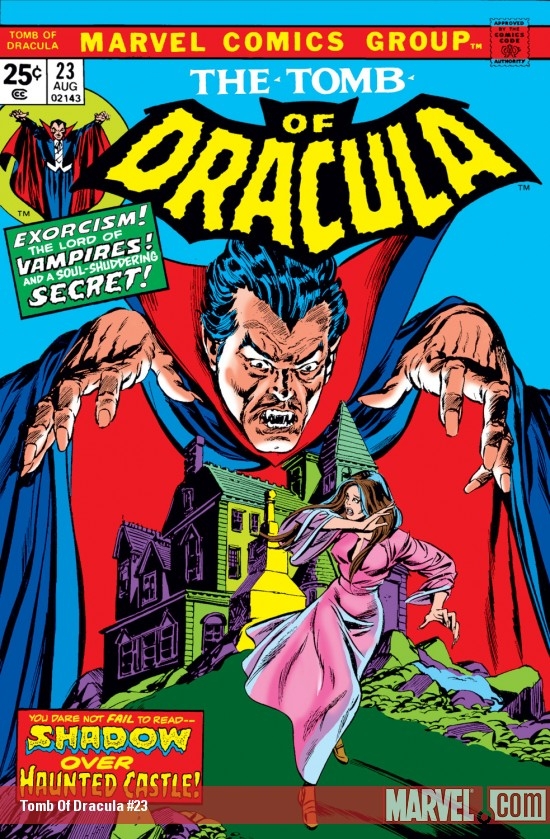 Giant-Size Chillers #1 was subtitled The Curse of Dracula (with the second issue, the series split into two titles, one being simply Giant-Size Dracula). The issue is entitled “Night of the She-Demon.” The story returns Dracula to London and introduces us to Sheila Whittier, the owner of a castle Dracula covets. The issue also introduces Dracula’s vampire daughter, Lilith who possesses the soul of Angel O’Hara, a young pregnant woman who has good reason to hate her abusive father. The twist of making Lilith both a vampire and an avenging spirit seeking young women with father issues to serve as hosts is an inspired one. The aforementioned departure of Taj Nitall to return to India and Lilith’s subsequent attack on Quincy Harker are depicted in short order. Inspector Chelm arrives on the scene and discovers Quincy near death after the attack. Later in the issue, Chelm is told by Quincy’s surgeon that he will survive. Meantime, Dracula has arrived at Sheila Whittier’s castle but rather than serving as her attacker, he finds himself becoming her protector. This unexpected development plays an essential part in showing Dracula in more than just villainous shades. The origin of Lilith is revealed with Marv Wolfman making good use of the historical Vlad the Impaler’s horrific exploits. The issue ends abrubtly with Sheila’s ghostly tormentor being revealed as all too human and while the mystery is solved the nature of Dracula’s relationship with Sheila and his inevitable confrontation with his daughter remain to be resolved.

Issue #23, “Shadows in the Night” picks up immediately where Giant-Size Chillers #1 left off with Dracula dealing with what turn out to be actual ghosts haunting Sheila Whittier’s home thanks to an ancestral curse. Wolman and Colan wring genuine chills out of the material. The events bring Dracula and Sheila closer together as the tormented woman judges Dracula by his treatment of her rather than by the standards of the world while the vampire grows ever more protective. Wolfman makes the most of the angst over the estrangement between Dracula and Lilith. Their eventual confrontation is something he develops marginally each issue. Taj Nitall is shown back home in India and the reader learns the mystery behind his departure from Harker’s group involves Taj’s wife but nothing more. Wolfman excelled at developing storylines over many months, giving them time to grow and take shape rather than simply wrapping up a multi-part story, tossing in a filler issue, and then on with the next multi-part story. His run on the title truly made it a serial worth following and coupled with Colan’s masterful artwork, it made the title one that demanded the avid following that had begun to develop by this point.

More great stuff, William! If you’ll permit me to continue by own musings …

19 was an excellent issue. Intensely dramatic, not only because the two characters are struggling to survive, but also because it shows Rachel in particular making choices that define her — her inability to kill herself to take out Dracula, most notably, and then how Dracula was able to predict this, and how he flaunted that knowledge. And Frank, at the end, letting a weakened Dracula go in order to save Rachel, even though he knew she’d rather he choose otherwise. Excellent stuff, and Wolfman was able to use it to really show the fundamental inhumanity of Dracula as well as his supreme confidence, keeping one of his worst enemies alive just so he’d have some blood to keep him going over the mountain.

Unfortunately, I think Wolfman was at his worst with this series the closer it got to super-hero stuff. Not that he couldn’t write that, too (there’s a reason people remember the Teen Titans so well), but in this book it didn’t work, I feel. Doctor Sun is a good example. He’s just, for me, too far into the ludicrous. Given that Wolfman’s going for emotional realism with the other characters, Sun’s a really jarring element.

I think this is also a case where Colan’s realism actually worked against the story. Even when I was buying these books as back issues twenty years ago, the technology keeping Sun alive seemed boxy and old-fashioned. It’s quite a contrast with Kirby, whose weird-science is never outmoded because it was never based on anything real. (Understand, I have no problem with weird-science as such; just in this case I felt it jarred with the tone of things.)

But then again, some of what I’m describing is just what you get when you read something designed to speak to its time in a context almost forty years on. Similarly, your point about the Russian-vampire issue is well said; things change.

On the other hand, to me, Lilith is just a great character. The full nature of her curse only came out much later, but the whole idea was solid. Ghostly and murderous; and she tied into the past of Dracula that Wolfman was developing. That said, I think the best moment in Chillers was when Dracula has his first conversation with Sheila Whittier. Colan turned in a great storytelling sequence, close-ups of Sheila that Wolfman dialogued with a real sense of rhythm. And issue 23 of TOD, following directly on from Chillers, had what to me was maybe the most consistently horrific atmosphere of any issue up to that point, a claustrophobic mix of murder and family issues (and, perhaps, a kind of symbolic incest) topped off with some nice imagery — and the first implied conflict between Dracula and Satan.

Again, good show, and I’m looking forward to your next piece; there’s one issue that features both my absolute favourite post-Silver Age Marvel character, and one of the most stunning letters columns I’ve ever seen!

Agreed on all points, Matthew, although I believe Mr. Wolfman was aiming for more of a James Bond-style thriller with the Dr. Sun storyline than traditional Marvel superheroics. The series bears a resemblance in conception to Doug Moench’s MASTER OF KUNG FU (contemporary descendant of famous villain teams with ancestor’s enemies to fight on the side of good) and the Dr. Sun story arc would have been more at home in MOKF or even in Moench’s FRANKENSTEIN MONSTER series for Marvel.

Very true about the MOKF similarity. And I agree the Dr. Sun material would have fit in there or the Frankenstein series. I do see what you mean, as well, about the Bond influence in the storyline; but I felt that because Sun was given vaguely-defined mental powers (teleportation, paralysing people around him, occasionally force blasts), he came off as a Dr. Doom variant. That may be just the fact that I’m reacting to the form of a Marvel comic, or then again it might be the fact that I came to the series as back issues, by which time Wolfman had used Sun as a villain in Fantastic Four. My reaction to the character might well have been shaped by that.