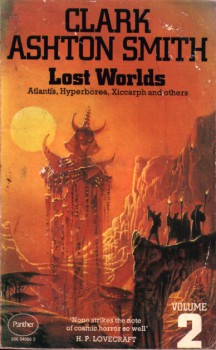 Confession: I’m a top 10/top 100/top whatever list addict. If I find an article on a subject about which I’m even remotely interested, and written in the form of a numbered list, I’ll generally stop to read it. That chance increases when said list is arranged in ascending or descending order of quality.

I fully admit that many top 10/ top 100/top whatever lists are contrived hit count fodder (slugging something a “top 10” anything is guaranteed to increase the number of visits to your web site–you’re welcome Black Gate editors!), but occasionally these lists serve a worthy function. For example, if I’ve just finished The Rise and Fall of the Third Reich or Flags of Our Fathers and am looking for another good World War II title, I’ll Google “top 10 world war 2 histories.” This practice typically generates a good suggestion or two–and another “top 10” article to read.

Top 10/top 100 lists are also flashpoints for debate, often stirring up vigorous agreement or righteous anger and indignity. I generated an angry response with my Top 10 Fantasy Fiction Battles of All-Time, in which former Cimmerian blogger Al Harron took me to task for excluding Robert E. Howard, and also for including some borderline “fantasy” choices. Hey Al, let’s still be friends, okay?

Which leads me to the point of this post. Have you ever typed “top 100 fantasy novels,” or “top 10 fantasy books,” into your search bar? If not, I’ll save you the work. You get this site, the “Top 100 Fantasy Books”.

The “Top 100 Fantasy Books” list claims to be generated through a quasi-scientific method, “a statistical survey of fantasy literary awards, noted critics and popular polls.”  To qualify a book or series “has to be generally regarded as fantasy by credible sources and/or recognised as having historical significance to the development of the genre.”

Unfortunately, and despite its claims to validity, this list is… rather crappy. I’ll fully admit to not having read a good half of these titles, but of the ones I have read, well, blargh. Some of them absolutely don’t belong. Others do, but are grossly out of order. And a few of them aren’t even fantasy (save in the loosest sense of the word, in that they include a fantastic element or two). Seriously, who shelves A Clockwork Orange or The Metamorphosis next to The Dragonbone Chair (which did not make the list)? 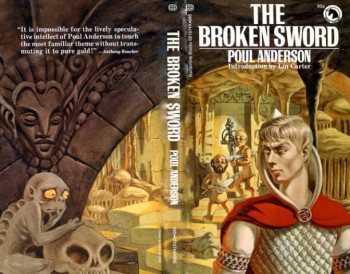 The first problem with this particular list is the fact that it’s called the top 100 fantasy books of all time, but it includes fantasy series. I suppose I can see why, given that just about every fantasy author today seems incapable of writing anything less than a trilogy (our estimable Howard Andrew Jones and his fine Desert of Souls being the exception, of course). Given this problem, in my opinion the list should have dropped the problematic use of the word “book” and instead declared itself the top 100 fantasy stories of all time. This would have opened up the field to short story authors Robert E. Howard, Clark Ashton Smith, and Fritz Leiber, who frankly are better writers than at least half of the authors on the list.

Alas, this fine trio is nowhere to be found on the “Top 100 Fantasy Books.”

And that’s just for starters. Getting back to books, you won’t find Poul Anderson’s The Broken Sword, E.R. Eddison’s The Worm Ouroboros, or anything by William Morris.

Also, since the list includes out-and-out works of horror like Dracula, surely something by H.P. Lovecraft would have made it on? Nope. How about that master of dark fantasy Harlan Ellison? Again, no.

The other thing about top 10/top 100 lists is that they’re often more notable for what they include, rather than what they exclude. This list is no exception. For example, you’ll find Christopher Paolini’s Eragon at no. 11. 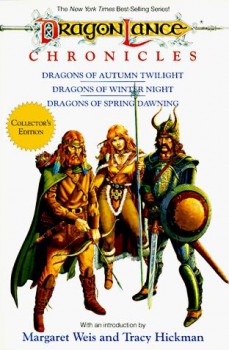 So in other words, Eragon is, according to this list, better than Homer’s The Odyssey (which sneaks on at no. 44 — and begs the question, where’s The Iliad?). Eragon is apparently also better than Beowulf (no. 55 — somewhere an unknown author is rolling in his or her grave).

What does it say for fantasy that Robert Jordan’s The Wheel of Time is no. 4 all time, and David Eddings’ The Belgariad is at no. 7? I’ve tried to read The Wheel of Time and failed (many others who did finish it wish they hadn’t, I’ve gathered). The Belgariad is a fun read, and I can perhaps see putting it somewhere in the top 100, but seventh best of all time? I have the same problem with Dragonlance Chronicles at 18. They’re fun reads, and I would recommend them, but they’re hardly literary heavyweights deserving of a top 20 ranking.

It gets worse. We have The Sword of Sha-na-na at no. 12 — ahead of Ursula LeGuin’s marvelous Earthsea books. Interview with the Vampire checks in at 29. Lord Dunsany can’t crack the top 100, but Anne Rice does? T.H. White’s The Once and Future King (47) is about 40 spots too low. It was beaten out by 15 slots by … Stephanie Meyer’s Twilight. Yuck. Poor Dante Alighieri’s Inferno at 89 was toppled by such heavyweights as Inkheart and The Cat in the Hat. (I might have gone with Green Eggs and Ham). 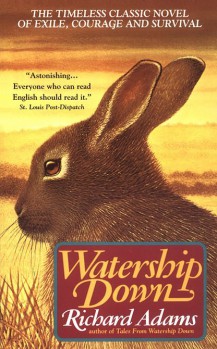 Seriously, how can you draw any kind of reasonable comparison between 14th century medieval literature and Dr. Seuss? The modern fantasy novel is generally regarded to have begun in the early-mid 19th century and any meaningful list of “fantasy books” should probably start there. If you’re going to go back to medieval and classical times, where is Le Morte D’Arthur or The Epic of Gilgamesh? Surely they deserve a spot, too?

Other choices are debatable. J.K. Rowling’s Harry Potter series arguably deserves a spot in the top 100, but no. 2 — especially given its youth — is way too high.

Now, I firmly believe that half the reasons these lists exist are to stir up controversy and incite frothing at the mouth. So in that sense, the “Top 100 Fantasy Books” succeeds in admirable fashion.

And to be fair it’s not a total waste of cyberspace. I was pleased to see American Gods make an appearance. Watership Down is an amazing book everyone should read at least once in their life. It was nice to see David Gemmell’s Legend get some respect, along with Peter Beagle’s The Last Unicorn. Guy Gavriel Kay’s Tigana seems to me criminally under-read. And of course The Lord of the Rings at no. 1 is a no-brainer. Any list of fantasy books in which the Lord of the Rings does not crack the top 10 is frankly not a real list.

But in summary it’s far too flawed to be taken seriously. I’d love to see someone undertake a proper list of top 100 fantasy books/novels/stories/series of all time. There must be a way to generate some statistically valid results — an author’s poll, a Black Gate reader’s poll, a séance with the spirit of C.S. Lewis, I don’t know. We can surely do better.

The only thing I get serious about on these lists whether the subject is ‘Top X Fantasy Books’, ‘Top X Rock Bands’, or ‘Top X Lists’, is that I seriously can’t get serious ’bout ’em. Seriously.

Well said. Although getting too angry at “Top 100” lists is probably a waste of energy. Sooner or later, the majority of them evolve into popularity contests. So you get “Dragonlance” instead of, say, BRIDGE OF BIRDS (which is not even listed. Feh.)

Still, I think these lists are useful. I was delighted to see Frank Miller’s THE DARK KNIGHT RETURNS, for example, and 100 YEARS OF SOLITUDE. Not to mention ELLA ENCHANTED, THE PHANTOM TOLLBOOTH, SABRIEL, and THE CAT IN THE HAT.

If this list directs even a few new readers to any of those titles, it’s done some good.

These lists are kind of a love/hate thing and IMO can be “Flame Bait”.

Fantasy literature now is so expansive that very few people have anywhere near a comprehensive knowledge to fairly make such a list which still would be an opinion. The generic default is the more current and more marketed stuff get the list while plenty of very great stuff gets ignored or marginalized due to being old or obscure. Like Dunsany or Clark Ashton Smith versus Tolkien and Lovecraft. Another aspect is that readers do tend to gravitate to a favorite “Genre” after a while so their knowledge and decisions can be biased as such. “Sword and Sorcery”/”Pulp” on my end with a weird tangent for sci-fi niche works.

These lists can be good in that they can get people interested in stuff they might never have known about. Esp lists with brief synopsis and explanations why.

But they can be “Flame Bait” both from people who like/worship the “Obscure” stuff to “Clique Weasels” that like certain niches of “Popular” stuff and want to inflate/defend it.

The only thing I get serious about on these lists whether the subject is ‘Top X Fantasy Books’, ‘Top X Rock Bands’, or ‘Top X Lists’, is that I seriously can’t get serious ’bout ‘em. Seriously.

That’s usually the case for me too, RadiantAbyss; I just wish this list didn’t dominate the search rankings like it did.

If this list directs even a few new readers to any of those titles, it’s done some good.

That is one of the saving graces of these lists. I do worry though that the takeaway will be, The Wheel of Time is da bomb! It’s only a matter of time before it overtakes Tolkien!

Fantasy literature now is so expansive that very few people have anywhere near a comprehensive knowledge to fairly make such a list which still would be an opinion.

The closest I’ve been to a person who could make such a list–and have it taken seriously–is Steve Tompkins of The Cimmerian. Alas, we lost Steve to an untimely death two years ago.

Bites when ‘you’ are not behind said dominator but that’s life tyke.

For the record, I think this list is really, really off…

I like your ‘should have been x best stories, not novel/series’ idea.

Antetolkien ‘Fantasy’ was rarely if ever novel length even by 1950’s standards.

Some of the best ‘Fantasy’ is antetolkien if you ask me. ( Yes I am aware you did not 😉 )

One personal issue; is that this shit is U.S. quarter of the Anglophone Empire as all get-out…Seriously…Think about it man…

At the end of the day, though these things are ultimately meaningless, thus to me anyways ultimately harmless.

Oh, and we all KNOW whom the only truly qualified individual to make such a list is, and it be definitive…

Not upset, just surprised. How did Tanith Lee not make an entry in the top 100?

Not upset, just surprised. How did Tanith Lee not make an entry in the top 100?

I would say I’m surprised too, but then again, the list is pretty crappy.