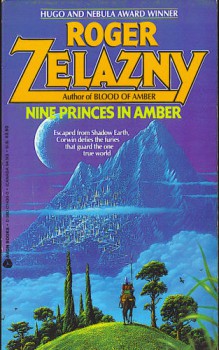 Now that Game of Thrones is a success and American Gods is on deck for production, what should HBO tackle next? Considering that they’ve got one series covering the Sexy Dead People genre, another one for Epic Fantasy, and a third covering Modern Ironic Fantasy, what fantasy genre has been left out? It seems to me that the obvious next choice should be either Napoleonic fantasy or classic High Fantasy. I don’t think they’ll consider anything that smells of science fiction proper. Steampunk, being the flavor of the month, might appear to be obvious, but I don’t think it has enough of a following to carry a televised series. On the Napoleonic side, Naomi Novik’s Temeraire novels would be a good choice, but there too I am dubious that there has been enough sales success.

On the High Fantasy side, I desperately hope that no one will consider the execrable The Wheel of Time; while I would love to see Zelazny’s Amber make it to the screen, it’s probably a bit too obscure for mainstream adaptation. Tolkein and Lewis have been done by Hollywood, so who does that leave? Moorcock? That’s not going to happen. Dragonlance? It’s got the scope and story depth, but might do in the D&D-hating New York Times reviewer and the dork factor is probably too high. The Seeker ruined all future prospects for The Dark is Rising, which is probably too juvenile anyhow; that would also be the case regarding The Chronicles of Prydain even if Disney didn’t still control the rights.

I dunno — Novik has enough success to be able to write full time. And Peter Jackson did take out the option on Temeraire, I thought.

I say adapt some of Lin Carter’s works:-)

We’ve all got “Greats” we like, many of whom Lin Carter rescued from obscurity or helped jump-start. And the sad sacrifice is that he’s seen as a “Hack” which he admitted he was compared to the awesome talent he promoted. And when these guys get adapted, their “Fan Base” is foaming with rabid rage because they feel cheated, diminished, etc.

But I like Lin Carter’s stories a lot. And they were pretty straightforward and cinematic, they’d adapt easily. No careful wrapping of words of many layers, no events that had multiple meanings, just good fun and adventure.

Of course, the better way would be to give NEW writers/storytellers a chance. But, of course, the giant media machine doesn’t want to “Risk” anything, they just want to make a product and take the safest bets possible. That, btw, is why it’s all so lame… I just think Lin Carter’s stuff could go through that and still be entertaining.

I actually think science fiction would be the obvious choice; no way would they have another series with swords in it running concurrently with Game of Thrones.

Bill, what sci fi book would be your pick for the next HBO series?

I think Jack Vance’s The Dying Earth could make a fun mini-series, each episode tackling one of the stories. I think that could be fun and beautiful, but I doubt that would happen. Maybe Vance’s Demon Princes or Planet of Adventure books? They are fun, but I also doubt HBO would do it.

I don’t have any concrete ideas about what would be a good property for HBO to tackle — but I do think you need something with a large cast of characters, as opposed to something that focuses on only a few, or one. Just seems like that works much better in the 10-12 episode format.

I think a series that would fit in well at HBO would be the Deryni series, but they’d have to sex it up a bit.

I suppose that Donaldson doesn’t have wide enough appeal, but I’d love to see the Chronicles of Thomas Covenant done well. Not enough sex for HBO though. there was some talk of a screen play a few years ago.

for all the howardians adaptations of his stories of Conan could be awesome, one for episode with some of them, The hour of the dragon, People of the black circle in two or three episodes
by the way, why not a miniseries about Elric of Melnibone or other works of Michael Moorcok like Dorian Hawkmoon?
but with HBO I see more probably adaptations of sagas in the line of A song of ice and fire, The gardens of the moon, The first law, Prince of nothing or The name of the wind

A literarily faithful but big budget Conan series would be cool, but I can’t see HBO running with two “pre-modern guys with swords” series at once. Maybe they could pick up Soloman Kane, or something? Demon-haunted Puritans, perhaps gothed-up a bit, might fly.

Perhaps something a bit different … some kind of mad space opera thing, perhaps — though it’s tough to think of a well-known literary property that would suit for the adaptation. I understand a Honor Harrington film or series was at one point considered by someone, which might be fun, though I can’t see there being enough sex for HBO. Perhaps they should just invent their own story.

Equally, turning back to fantasy-type stuff, it would be fun to see them do something with a very different look-n-feel to the usual Euro-American stuff. Maybe they could option Charles Saunders’s Imaro, do something Indian (though not just another reworking of the Mahabharata), or something in the wuxia genre? Or perhaps a crazed historical fantasy set in pre-Conquest Central America, all drenched in jade, feathers, and blood? Or even a twisty alternate history that starts in pre-Conquest, then ongoing plot threads are interrupted by the arrival on conquistadors, and THEN things go awry from history as the natives turn the tables and the series ends with the Aztec invasion fleet eyeing the coast of Spain. 🙂 Insert horrific demons and stuff if necessary. 🙂