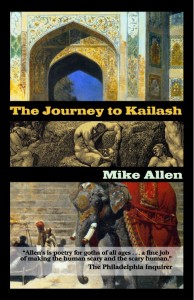 Today, for a little while, I remove my monster mask (sort of) and don my Purple Hat of Poetry.

Over at my new homepage, I’ve been sharing some of my poetry stock in honor of National Poetry Month. I started with a poem of mine called “Phase Shift,” that’s half upside down, and recently paired with an awesome space vortex illustration.

Now, because I can, I’m taking a series of poems gathered in my 2008 collection The Journey to Kailash and I’m running them, with accompanying audio readings, one a day on my new WordPress blog until the end of the month.

The Enchantress of the Black Gate, on learning I was doing this, asked me to write a blog entry on Poetry and Fantasy.

“Write it about your own relationship to it,” she said.

Okay, that I can do.

I had no idea at the time, of course, what a curious path this would lead me down.

For better or for worse, encounters I had with the words of two very different writers shaped the sort of artist that I am today. Both encounters, with Edgar Allan Poe and J.R.R. Tolkien, happened when I was in 3rd grade. Curiously, it’s Poe who is known for poetry (he’s in every POEm, as they say) but I wouldn’t credit him with sparking my interest. Rather, exposure to him led to my lifelong fixation with terror and the morbid (there are other posts on this blog that go into that part of my persona in a little more depth.) A word about how I discovered Tolkien — essentially, I wasn’t given a choice. The Lord of the Rings is my father’s favorite book. When I became old enough to handle big books, not just Dr. Seuss and co., he began nudging me at Tolkien’s work. His efforts redoubled when I was 8 years old and the Rankin-Bass adaptation of The Hobbit came out on television — their mangling of the story so mortified him that he insisted I read the book version as antidote. If memory serves, I read The Hobbit in 3rd grade and The Lord of the Rings the next year. And from that point on I was done for. The experience transported me so thoroughly and with such addictive power that I wanted the same from all other books from that point on. I don’t think my father could have anticipated where this would take me. His take on fiction, essentially, was that the perfect story, said Ring trilogy, had already been written, so what was the point in trying to find others like it? (Or for that matter, trying to write more?) After all, nothing could compare. But, and I guess thank goodness, that’s not how my brain worked. I hungered for more, more, more, more, more.

My determination to devour everything Tolkien had ever written led me to discover a curious volume in the Wise County, Va., public library: The Adventures of Tom Bombadil, a collection of poems written by the Oxford Don that in truth are part of the world-building he did to further flesh out Middle Earth. I don’t think anyone thinks of these alternative historical folk songs, ballads and lyrics as masterpieces of verse. But they taught me an interesting lesson, and gave me a perception that I think many genre fans today would find surprising, even though it’s demonstrably true in a number of cases: Fantasy writers also write poetry! 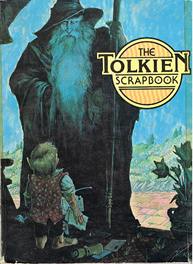 Fast forward a couple years. My Tolkien obsession led me out in a number of directions, to discoveries of science fiction and even some instances of Capital “L” literature. It also led me to bug my parents to by a book for me out of a catalog, The Tolkien Scrapbook, a collection of writings about Tolkien that included Colin Wilson’s essay “Tree by Tolkien.” A number of writers not yet familiar to me at that time, including a certain H.P. Lovecraft (see Poe above) got name-dropped in said essay, and, most significant to this topic, Wilson devoted some space to comparing and contrasting The Lord of the Rings with a certain work called The Waste Land, by some T.S. Eliot dude. At the time I didn’t even know The Waste Land was a poem. But now I knew I had to read it! And lo, and behold, there it was on my parent’s bookshelf: The Waste Land and Other Poems.

So I read The Waste Land — and of course, I didn’t understand it. But man, there were eerie Tarot cards and cities of the dead and phantasmagorical chess and words moving around on the page in ways I’d never seen before. That was what I consider my first real experience with poetry. That led me, so to speak, down the rabbit hole.

I never made any kind of formal study of poetry. I certainly never set out to be a “poet.” (The fact that a number of people now think of me as one, I think, proves that sometimes charlatans do get away with it.)

But I thought nothing of trying out poems as well as short stories on publishing markets, when I began to get the idea (it really didn’t set in until my junior year at Virginia Tech) that I really did want to be someone who writes. Remember, as far as I understood, growing up in an isolated mining town far, far away from any sort of fandom community, all science fiction and fantasy folks wrote poetry too. Hey, there were poems in my issues of Asimov’s Science Fiction — I was just as starstruck by the authors of those as I was of the minds behind those Hugo Award-winning novellas. And double-hey, even Asimov wrote limericks!

And so my first “sale,” in 1991, to the Virginia Tech student literary magazine, was a “science fiction poem.” (Probably worth mentioning that I’m also someone who personally sees sf, fantasy and horror as all one lump — maybe a different texture here or there.) And having succeeded once, I kept trying.

And so now here we are in 2011, and God help me, I have more than 200 published poems to my credit; and the writer whose name I drop whenever someone asks me who’s doing the best work in speculative poetry right now, Catherynne M. Valente, has included work of mine in her own poetry venue at Apex Magazine; and I have this Purple Hat that reads “The Poetry Guy” that was gifted to me by the charmingly dangerous editrixes of the fantasy poetry zine Goblin Fruit. I’ve talked about poetry at cons, at colleges, even the Library of Congress. And I have a few poems that I’ve scribbled over the course of this long, strange journey that I’m sharing with the world again, for the sake of this “cruelest month,” when we celebrate poetry as a nation.

I hope you enjoy them.

My next move, obviously, is to read The Wasteland.

Did you ever read Childe Roland to the Dark Tower Came? I’m sure you must’ve. I came to it through King, of course. And decided I would go for a long walk in the marsh and read the stanzas aloud at intervals.

You can imagine the reaction of the joggers.

You know, I have read it, or at least parts of it, but as I encountered it much later in life, it didn’t leave quite as deep a crater.

I am sorry I wasn’t there to witness this marshy performance!

[…] Mike Allen on Through Mordor to the Unreal City: A National Poetry Month Post. […]