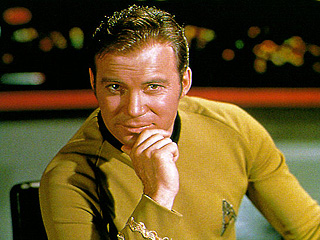 For much of my life I watched him, in his role as Captain Kirk, help program Americans to accept Canadians as their leaders.  Made things a lot easier when I moved to the U.S. in 1987 to finish my Ph.D, let me tell you. Not to mention numerous D&D games, in which elves (and anything else with pointed ears) immediately referred to me as “Captain.”

It did not, unfortunately, make picking up girls easier. For which I blame fellow Canadians Dan Aykroyd, Mike Meyers, and especially Jim Carrey. Doofus.

Anyway, back to Shatner. The Great One was born on March 22, 1931, in Montreal, Quebec. He had a starring role in Roger Corman’s 1962 film The Intruder and numerous appearances in film and television, including the classic Twilight Zone episode “Nightmare at 20,000 Feet,” and “Cold Hands, Warm Heart” for The Outer Limits. In 1964 he guest-starred with Leonard Nimoy in The Man from U.N.C.L.E. episode “The Project Strigas Affair.” I’m serious — check it out. Shatner plays a pest exterminator, and Nimoy a sinister-looking assistant Balkan diplomat. It’s sort of like watching the Trek episode “A Piece of the Action,” if you’re drunk enough.

From 1966 to 1969 Shatner was cast as James T. Kirk, captain of the USS Enterprise, in the role that defined his career, and made things easier for a generation of Canadians living in the U.S. He reprised the role in Star Trek: The Animated Series from 1973 to 1974, and in seven Star Trek feature films between 1979 to 1994. He was a lead in the popular Boston Legal, currently stars in the CBS comedy $#*! My Dad Says, and has a cameo in the upcoming Horrorween.

Happy Birthday, William Shatner! You are a god among men.

Captain Kirk was my childhood hero, and say what you will about Star Trek’s flaws, but I took an awful lot of good lessons away from the show. Shatner, as Kirk, delivered some passionate speeches about freedom, justice, and courage, and portrayed a man who never hesitated to do the right thing, even if it put his career or life in danger.

Shatner’s got a bad rap as a ham actor. In the strongest episodes, when he had fine material, he delivered the goods; he was a convincing, compassionate leader who tempered his passions with his intellect and who strove hard to protect his ship and the men and women who served aboard her — not to mention the ideals of the Federation.

Revisiting these episodes as a middle-aged man I better understand why I so wanted to be someone like Captain Kirk. Thank you, Mr. Shatner, and Happy Birthday!

I’ve been watching the original TREK series with my three kids (and Alice). We watched THE CORBOMITE MANEUVER last week, with the rotating cube that stops the Enterprise dead. There’s a terrific scene where Kirk asks for reports from his senior officers, and Scotty says, “That thing is a solid cube. Beats me what makes it go, or how it senses us. That’s my report.”

Shatner has no line. But he turns to Scotty and give him a perfect look — amused, exasperated, and knowing. It reminded me how perfectly suited he was to this role of Captain of this superb crew.

Agreed on Shatner’s acting! I think TV acting generally used to be broader and more stagey; but I think Shatner back then did exactly what the job called for. Howard, I completely agree that he can rein it in when needed; check out the eulogy for Spock in Trek II. Nicely underplayed, and thoroughly moving.

On another note: as a native Montrealer, it’s always a kick, and slightly surreal, to see a guy from my home town become such a … well, icon, I suppose. I mean, this is a guy who was in classes at McGill with my aunt and uncle — and who left his name scratched into at least one desk there, if I recall what they told me correctly.

Oh, and John: that scene you mention with Scotty — you know that James Doohan was Canadian, too, right? So basically you were looking at an all-Canuck moment.

James Doohan was the only original cast member I ever met. He gave a talk at the University of Ottawa when I was a grad student there – 1986, maybe? Smallish crowd, maybe 200 or so, and he stuck around afterwards to talk to fans and sign autographs. My younger brother struck up a brief conversation with him, and I got to shake his hand. Great guy, and a lot of funny stories. Although he didn’t have a lot of kind things to say about Shatner at the time.

Total coolness, nice salute guys. Tor.com put up a nice one too, with lots of Bill’s ‘talking-songs’ 🙂