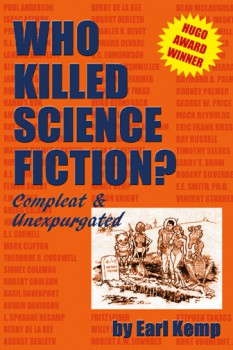 1) Do you feel that magazine science fiction is dead?
2) Do you feel that any single person, action, incident, etc., is responsible for the present situation? If not, what is responsible?
3) What can we do to correct it?
4) Should we look to the original paperback as a point of salvation?
5) What additional remarks, pertinent to the study, would you like to contribute?

Kemp published the results in his one-shot fanzine SaFari Annual #1 in 1960. Only 125 copies were printed, and it instantly became a collector’s item. A candid dialog on the flaws and fate of the genre between most of its brightest lights, Who Killed Science Fiction? achieved near-legendary status in the SF community, and SaFari Annual #1 won a Hugo Award in 1961 based on that sole issue.

In 1980 Kemp created a second edition, posing a new batch of questions to his original contributors and many bright newcomers. It was never published, owing chiefly to his inability to raise funds. Finally, in 2006, Kemp produced a Complete & Unexpurgated edition of Who Killed Science Fiction? in his fanzine eI29. The complete text is now online at Bill Burn’s indispensable efanzines.com site. 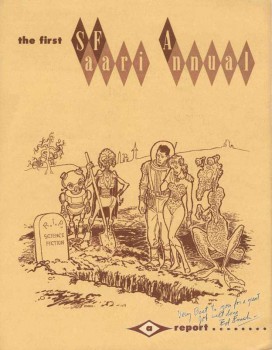 Publisher John Teehan with Merry Blacksmith Press, who produced Bud Webster’s terrific Anthopology 101, lamented the lack of print edition. As he says in his introduction, “If I had seen the 1980 edition, which sadly never came out, I would have been thrilled beyond belief. These were my people talking about one of my great passions.”

So early this year he produced one: the only print edition of Who Killed Science Fiction? in over 50 years, including both the original and 1980 versions (complete and unexpurgated), plus numerous appendixes, including Ed Wood’s “Science Fiction Magazines, 1926-1960,” and Frank Robinson’s introduction to the 1980 edition, “For Sale: One Cloudy Crystal Ball.”

The print version is also lovingly fleshed out with numerous reproductions of pulp covers, great sidebars, and an index.

It runs 230 pages, costs $13.95 in trade paperback, and gets my highest recommendation.

You can order it directly from the publisher here.