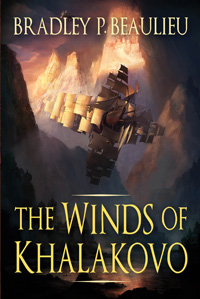 Black Gate blogger Bradley Beaulieu’s first novel The Winds of Khalakovo was published by Night Shade Books on Monday. I asked him to tell us a little bit about it, and his influences:

Thanks for having me on Black Gate. It’s great to be able to talk to some of the fans of the magazine, because unlike other places where I often feel like a relative newcomer — a welcome guest, so to speak — here I feel at home. I feel like I’m among friends, like we’re all part of an extended family: those who love adventure – and epic-based fantasy. So I was excited about the chance to share the news about my debut novel, The Winds of Khalakovo, just released by Night Shade Books.

The Winds of Khalakovo is a story about Nikandr, the Prince of a Grand Duchy modeled loosely after Muscovite Russia. The Nine Duchies of Anuskaya have been beset by a decade-long blight, by a wasting disease that strikes commoner and royal alike, and by the Maharraht, a rebellious splinter group that wants nothing more than the destruction of the Grand Duchy and her people. While searching for a way to heal the islands, Prince Nikandr stumbles across a boy, a boy who has the power to break worlds, and he finds that the Maharraht are bent on using this boy to achieve their goals. But the boy also has the power to heal, and it falls to Prince Nikandr to unlock his secrets before the Maharraht can use him to lay waste to his home of Khalakovo. 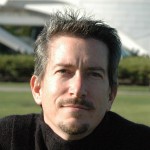 This description — what the story is about — doesn’t give you a sense for how it reads — the emotions it invokes and the feelings it summons. The Winds of Khalakovo was inspired by a lot of things, but really, the heart of it is the tone and the scope. I was heavily influenced by J.R.R. Tolkien in my early years, but later I grew to really appreciate the majesty and richness and cruelty of the stories from authors like C.S. Friedman, Guy Gavriel Kay, and George R.R. Martin. I also liked the grittiness and the visceral quality of Glen Cook’s Black Company series and the writing of Tim Powers. Any author is really an amalgam of their influences, and these are the ones that stand out the most when I try to explain what The Winds of Khalakovo is like.

I hope you’ll give The Winds of Khalakovo a look. You can read more and view the trailer for Winds on my website, and in the coming weeks, I’ll have a large sample of the book to share. I’ll be sure to pass the word over to Black Gate once they’re available so you can give it a read.

Thanks again for having me.
Bradley P. Beaulieu
www.quillings.com

The Winds of Khalakovo is available for $14.99 in trade paperback, hot off the press. Try it out — I think you’ll enjoy it.

[…] from his novel The Straits of Galahesh, the popular follow-up to his breakthrough first novel, The Winds of Khalakovo, both from Night Shade Press, and Chicago author Holly McDowell read a surprising and powerful […]