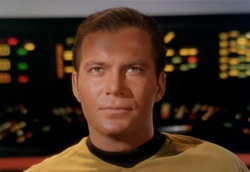 Today he’s at Tor.com, writing about how James T. Kirk led him on a many-year mission to explore strange new worlds of historical fiction:

I’d read that Star Trek’s creator Gene Roddenberry had modeled Captain Kirk after some guy named Horatio Hornblower. I didn’t think I’d like history stories, but I sure liked Star Trek, so I decided to take a chance. Once I rode my bicycle to the library and saw how many books about Hornblower there were, I figured I’d be enjoying a whole lot of sailing age Star Trek fiction for a long time to come.

Of course, it didn’t turn out quite like that. Hornblower wasn’t exactly like Kirk, and his exploits weren’t that much like those of the Enterprise, but they were cracking good adventures. Thanks to my own curiosity but mostly to the prose of the talented C.S. Forester, my tastes had suddenly, and accidentally, broadened beyond science fiction… I no longer thought of historical fiction as a strange, untouchable world, and as I grew older I tried more and more of it, sometimes because a period interested me and sometimes just because I liked a cover or a title. That’s how I found the work of Cecilia Holland, and it’s why I wasn’t afraid to try out a book by Harold Lamb titled The Curved Saber after I was spellbound by Lamb’s biography of Hannibal, the great Carthaginian general…

The complete article is here, and you can learn the mind-boggling details about Howard Andrew Jones month at Black Gate here.