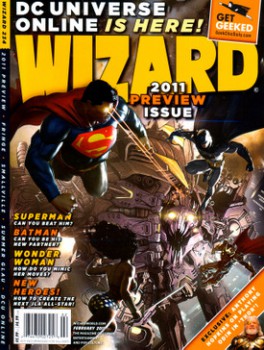 Longtime comic magazine Wizard, once one of the most popular publications in the industry, has folded. Its sister magazine ToyFare, dedicated to pop-culture toys and action figures, has also ceased publication. Both magazines were owned by Wizard Entertainment.

Wizard was launched in 1991, near the height of the “speculator boom,” fueled by the arrival of Image Comics and the rise of superstar artists such as Todd McFarlane and Jim Lee. Dedicated to covering news, pricing trends, and personalities in the field, Wizard quickly captured a large readership and brought real production values — including glossy paper, full-color interiors, and rock-star journalism — to comic fandom for the first time.

With its regular Wizard Top 10 and Market Watch columns, which reported on the “hottest back issues” of the month and predicted future price trends, Wizard catered to a new generation of fans and buyers who purchased comics chiefly for their collectability and perceived future value.

It also shared much of the blame when the comic marketplace collapsed as those speculators, burned by numerous bad investments, fled the market in the late 90s. 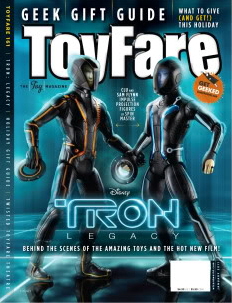 Two-thirds of comic book stores across the country closed between 1993 and 1997,  many major publishers were driven out of business, and even Marvel Comics declared bankruptcy in 1997.

For most of its life every issue of Wizard also had a price index, allowing collectors to track the price of their latest hot comics month-to-month (but I only read it for the articles).

At the peak of its popularity Wizard sold over 110,000 copies/month through Diamond alone.  With its final issue, that number had dropped to 17,000.

Wizard Entertainment is ceasing publication of the print magazines Wizard and ToyFare. Wizard World, Inc. will begin production of the online publication ‘Wizard World’ beginning in February. We feel this will allow us to reach an even wider audience in a format that is increasingly popular and more readily accessible.”

Wizard Entertainment continues with its other ventures, including the Chicago Comic Con and many other conventions. Their website is here.

I used to read Wizard for its great interviews, previews etc – but as I gradually moved to graphic novels over monthly titles, I realized I never read Wizard anymore.

They say that when a Wall Street tycoon got advice about stock from his shoe-shine boy he bailed on the market before the crash that caused the great depression.

I remember doing the same when I found out Wizards were being valued as collectors items with inflated value.

Crazy, but hey, they had a nice 20 year run and I’m sure someone made a million during that time.

I fondly remember Scrye Magazine, which covered collectible card games. My friends and I spent hours reading about deck strategies. I think they folded last year. Sad to see them go.

Interesting point. Years ago I would buy graphic novels if (and only if) I’d read all the individual issues and planned to re-read them multiple times (like THE DARK KNIGHT and RONIN). Years later I’d stop picking up series I loved, instead buying them as they were collected in graphic novels (like FABLES and WALKING DEAD).

Now I buy graphic novels to try new series out. I’ve just come to prefer that format, I guess. But I still bought WIZARD and COMIC BUYER’S GUIDE from time to time, to see what other people were reading and recommending.

>They say that when a Wall Street tycoon
> got advice about stock from his shoe-shine
> boy he bailed on the market before the
> crash that caused the great depression.
>
> I remember doing the same when I found
> out Wizards were being valued as
> collectors items with inflated value.

Ha! Great analogy. I think the first comic I ever speculated on (i.e. bought two copies of, one to read and one to keep) was the third or fourth issue of the Simonson THOR, in early 1984. That was one of the comics that helped spark the whole speculator craze, with issue 337 (Simonson’s first) jumping to a very inflated value mere months after he started his run. It taught comic buyers that they had to buy almost any issue of a series that suddenly switched creators, or pay the price later.

THOR was just about the last comic I speculated on as well. All my issues remain in boxes, unsold. Like virtually all speculators. 🙂 I remember talking with a local comic shop owner who told me someone had walked into his shop a few years ago saying he had a huge comic collection he wanted to sell that was “worth thousands.” Turned out he had several boxes of YOUNGBLOOD #1, the short-lived 1992 Image comic by Rob Liefeld, which is worthless today. He left the shop angry and bitter, refusing to sell.

Like a lot of speculators who used to spend a fortune in comic shops, the owner never saw him again.

I had a friend who believed comics were investments. Unfortunately, they really aren’t. The only ones that have ridiculous value are the old ones where the comic creators didn’t know what they had. Early 60s Marvels that were tossed out with the weekly newspapers – or go back farther to the DC comics and the WW2 paper drives where they were almost all tossed on the scrap heap. It is the unintentional rarity that make those valuable.

Modern comics, though they certainly can be limited in release, could probably be recreated at any time in future. And, once digital comics take off, then short of wiping everyone’s disk drives, you can’t force rarity.

I came to comics late – like, now. I did the weekly trip to the shop for a while, but now I prefer graphic novel collections.

I’m always behind with my reading anyway. 😉

Wait–John, are you seriously saying that you haven’t READ the Simonson Thor’s?

I missed them the first time around and didn’t discover how fine they were until a friend loaned me his incomplete collection. I liked them well enough that I tracked them down, and now have the graphic novels on my shelves. Good stuff.

Scrye! I totally forgot about that magazine. Wow, it’s been years. And yeah, I remember pouring over it, thinking “Holy cats — a beta edition of Black Lotus sells for HOW MUCH?”

There’s an exhilarating optimism in those magazines, the sense that your obsession really ISN’T just a frivolous hobby (like your wife keeps telling you). They vindicate your investments, with skyrocketing price projections and breathless articles.

Unless the market collapses and the magazines go out of business, of course.

pmcnamee67: Comics today are worth nowhere near as much as the ones destroyed in bonfires, but some modern comics can fetch a few extra bucks. I was shocked to see that one of my Archie TMNT comics was out of stock on most sites. Some collectors would might pay $10.00 for it. 🙂

John: “There’s an exhilarating optimism in those magazines, the sense that your obsession really ISN’T just a frivolous hobby. . .”

That was the beauty of Nintendo Power. . . .

> I had a friend who believed comics were investments. Unfortunately,
> they really aren’t. The only ones that have ridiculous value are
> the old ones where the comic creators didn’t know what they had.

Very true. The thing that really triggered the speculator boom though was when comics that were literally printed in the millions (such as the 1990 re-launch of Spider-man, with Todd McFarlane at the helm, that reportedly sold over 2.5 million copies of the first issue) that STILL accumulated wildly in value weeks after it was released.

That taught speculators at the time that future demand was the chief guarantee of price, not rarity, and that timing was everything. Sure, there were millions of copies of Spider-Man #1, but they were all in plastic bags, unread, waiting for some mythical time when they would be worth $$$ — so if you wanted to buy one TODAY, you had to shell out $30 – $50 (or more).

That’s practically the definition of a bubble. But for a while the early speculators made a tidy profit, and that’s what drove more onto the bandwagon.

Sorry, that wasn’t clear. I read and loved the Simonson THOR issues — especially the frog issues, which totally turned my head around. The brief period when I “speculated” was in 1984, when I came in to my local comic shop in Ottawa to buy comics for the week and found only two copies of the latest issue on the stands. The shop owner told me it was flying off the stands, and I bought both issues.

I think I bought two of the next few issues as well, and then gave up. You had to be willing to eventually sell your comics for speculating to make sense, and after the trauma I endured when my father made me sell my entire comic collection for $12 at the age of twelve, I couldn’t see myself selling comics ever again. 🙂