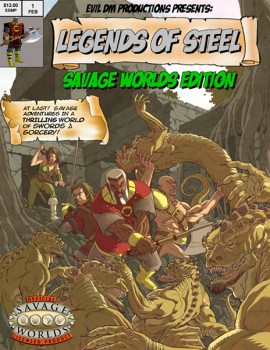 Savage Worlds is a gaming system designed to provide a basic framework around which games in all sorts of settings can be built, but especially games in the Sword & Sorcery genre will perhaps find the best home there. Howard Andrew Jones explores one such setting …

A lot of games wear their hearts on their sleeves. They’re labors of love. They almost have to be, because one doesn’t usually get wealth, fame, and women by playing and designing games. When it comes to Legends of Steel, the heart it wears on its sleeve is mine. I wasn’t remotely involved in its creation, but I’m a huge fan of sword-and-sorcery, and Legends of Steel seems to have been designed, more than most other games I pick up, with me in mind.

The game comes in several different flavors, depending upon what game system you’re using. I read through the Savage Worlds edition, but it’s also available as an add-on for 1PG games and the well-received Barbarians of Lemuria. While none of these systems are as famous or as popular as a certain near ubiquitous D20 system, they have some real strengths, among them the common thread that they are quick to learn and easy to play. And that suits Legends of Steel.

“In Legends of Steel, the Heroes aren’t so much the ‘good guys’ as they are the ‘Not so bad guys.’ Good and evil aren’t concepts that are at the forefront in daily life, nor are alignments strictly defined and codified. There are many shades of gray in the genre of Sword & Sorcery…The heroes of Sword & Sorcery tales were warriors and rogues, but not murderers and violators of the innocent. Such behavior should be for lesser men, and discouraged by the GM as it is eventually destructive to the spirit of the game.”

Here’s Mejia describing the use of logistics and the careful kind of possession tracking common to other fantasy role-playing. “It goes against the grain of the genre to be too detailed when dealing with the actual logistics of an adventurer’s daily life. Think of the typical heroes from various Sword & Sorcery tales; most of them traveled their worlds in a loincloth and fur boots, armed with a sword and maybe a dagger. Money and supplies never seemed to be an issue. They lived off the land and always had a few coins for a tankard of ale and a haunch of roast beast at some dingy tavern or other.”

Exactly. Mejia’s thorough understanding of the stories permeates this supplement. He loves the gritty details and celebrates the fun, and even some of the cheesy aspects of some sword-and-sorcery offerings. He suggests that players should be encouraged to take risks and perform daring feats, and that they should strive to be descriptive when they provide details of their character interaction. Here’s further appropriate advice:

“Often the slowest part of an adventure is the start. Gathering the characters together, introductions, and finding a common reason why this group would even be together in the first place, can be a time consuming challenge. Why even deal with it? Sword & Sorcery tales often begin with the hero already in a bad situation. They could be in jail, unconscious in an alleyway, lost in a desert, etc… jump right into the action and start the adventure in the middle of a battle or a back alley brawl. Nothing gets the game going quicker for the players than having to draw from the action deck right after they sit down at the table to play.”

Mejia’s prose is short, to the point, and packed with punch. There’s no padding, and nearly every line counts. You determine a character concept, choose a background and a few skills, benefits and hindrances, and you’re ready to go (well, provided you have a copy of the Savage Worlds game system). There are no lengthy charts, and not much learning curve.

Mejia doesn’t just get the character creation and advice to the game master right; he succinctly describes a world rife for adventure. In 31 pages he conjures the major areas of a continent in enough detail to get any game master’s mind turning with adventure plans. Each country or city-state is briefly introduced, followed with a handful of strengths, weaknesses, and opportunities for adventure. There’s more, too, like an introductory adventure, gods and goddesses of the campaign world of Erisa, and a small but rich helping of game master advice for evoking the right atmosphere, from getting the right balance of magic and dealing with sorcerous foes to an innovative and amusing table for generating the results of drinking too much – many of which lead to adventure hooks.

LoS delivers fabulous value for its price point. It’s meaty for its length, too, so it’s odd that I would say I wish there were more. There isn’t yet, but Mejia has one related work: Broadsword, for 1PG games, for less than four dollars. LoS had its genesis in Broadsword, and while some of the information in the little supplement is similar to what you’ll find in LoS, the mini-scenarios in the product alone are worth the price of admission. Even if you use some other fantasy system, if you’re a sword-and-sorcery fan, you’ll want Mejia’s work for atmosphere and adventuring suggestions. Highly recommended.