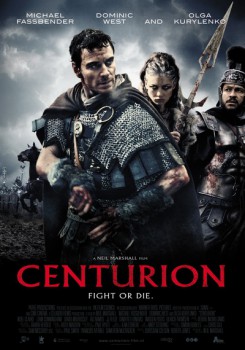 If you did not see Centurion during its U.S. theatrical release, that’s probably because you blinked. The British film ran in only a small number of theaters in August on limited engagements, with a simultaneous release on Video on Demand. It played at the Nuart Theater a few miles from my home for a week, and I was unable to get to it. I regretted it at the time because the trailers got my thrill glands pumping: a bloody historical action movie starring a Roman legion. Now that is my kind of fun! I also had faith in director Neill Marshall; I had enjoyed all of his previous movies, and they more than proved that he could handle violent mayhem.

Now that Centurion is on DVD and Blu-Ray, I’ve been able to see what Mr. Marhsall did with the murky historical legend of the Ninth Legion: he made a bloody historical action movie out of it.

Centurion is as straightforward as they come, something the director admits: “It’s not meant to be historically perfect. I’m picking up on a legend and exploring it . . . it’s an action thriller.” The Ninth Legion, which supposedly vanished on an expedition to Scotland in the second century, serves as a springboard for Marhsall to return to the territory of “soldiers-behind-the-lines” from his first movie, the werewolf thriller Dog Soldiers, and sprinkle it with Xenophon’s Anabasis and various World War II movies featuring tough guys doing what has to be done. It is a stripped-to-the-bone bloodletting, filled with decapitations, throat-slittings, head-crushings, and any other mutilation you care to mention.

Not every movie needs deep psychological character explorations or nuanced drama. Centurion knows what it wants, runs after it, and spikes it gorily to the ground. If you think you might enjoy this film, then you will enjoy it — Marhsall delivers the goods as promised.

The first moment of bloodshed in Centurion is an impalement to the crotch. This establishes the tone succinctly. Marhsall then hurls viewers onto the northern frontier of the Roman Empire during the reign of Hadrian, where the legions are engaged in brush warfare with the Scottish Picts.

Lead hero and voice-over narrator Quintus Dias (Michael Fassbender) survives a savage Pictish attack on his outpost and runs into the wilderness. To the south, Governor Agricola (Raiders of the Lost Ark villain Paul Freeman) orders the Ninth Legion to strike at the Pictish forces under their chieftain, Gorlacon, and annihilate them. The legion marches out under the command of steely General Titus Flavius (Dominic West, who looks more like a Roman soldier than any actor I have ever seen) and with the aid of mute Pictish tracker, Etain (Olga Kurylenko). 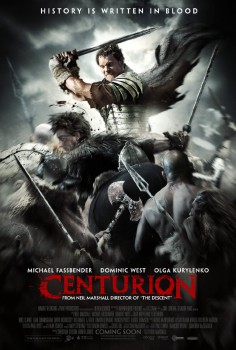 The fleeing Quintus runs into the Ninth Legion on their way north and joins them just in time for Etain to betray them to a brutal ambush. The Picts kill everyone except for General Flavius, who ends up a prisoner of Gorlacon, and seven men who gather under Quintus’s leadership to survive.

At this point, the story has all the set-up necessary to go the rest of the distance: Marhsall merely has to point the characters in the general direction of “rescue the general” and “get back home” and scream go! As the band of men from across the empire thrash through the roughest countryside imaginable, they manage to find a way to enrage Gorlacon even more, and he swears a blood-oath to kill them all. And as gorily as possible.

As a director, Neil Marhsall’s biggest strength is his energy and willingness to go for guts and glory without holding back. The carnage in Centurion reaches insane levels, with every imaginable way of hacking apart the human anatomy used at some point in the narrative. The violence is done with so much creativity that I have to wonder about the creative meetings involving the practical effects crew. (“Now, if he holds the spears and thrusts it through his own chest, back through the man behind him, what kind of appliances and squibs will we need?”) However, Marshall manages to pile all this bloody action into the film and not make it seem campy or funny, something that over-the-top violence can easily do. If a viewer starts making “Only a flesh wound!” jokes during scenes of carnage, the filmmaker has failed with making the mayhem convincing. At no point during Centurion did I feel like making a Monty Python joke. In fact, I just thought of the comparison right now. Bravo, Mr. Marshall.

The action is so constant that it often to blurs together in the mid-section. But for the finale, the filmmakers orchestrate a close-combat hack-n-slash festival that is damned spectacular. Just when you think the film has no more guts left to show, Marshall goes to the brink. It’s gorgeous. I’m probably a sick man for saying so. 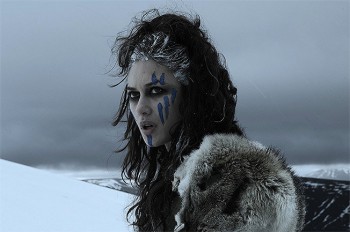 When a film has only a small space for characterization, superb actors are a must, and Centurion comes equipped with a stellar Brit cast. The seven men fighting through the enemy lines have only a short time to establish who they are aside from shouted names, but each manages to make his part stand out. Most memorable of the ensemble is David Morrissey as the veteran soldier Bothos, who embodies strength and loyalty with a hint of an aging man’s regrets. Michael Fassbender is a solid lead, a believable soldier who simply happens to be a bit less colorful than the fellows around him. In the movie’s sole quiet interlude, Imogen Poots appears as a Pictish woman outcast from her own people who befriends the soldiers; she gives the right balance of sentimentality and softness to leaven to the military action.

However, the role to remember is Etain, one the most awesome warrior-women I’ve ever seen on screen. Created something like a James Bond villain henchman with her trademark weapons and complete lack of dialogue, the character is the ultimate Pictish battle engine. Olga Kurylenko, who was dull as the lead Bond Girl in Quantum of Solace, is a keg of black powder here, and reason enough for any sword-and-sorcery fan to check out the movie. (But seriously, didn’t I have you sold at “crotch impalement”?)

I have little else to say about Centurion. As I mentioned earlier, the movie has an iron clad contract with people who think they might enjoy it: it provides the goods promised on time and as described. Is it a great movie? If stacked against many other action movies of the last years, which promise adrenaline rushes and instead turn into cures for insomnia, then Centurion is a great movie. It’s the finest movie that Neil Marshall has made, a summation of all his interests and talents, and for fans of blood-and-thunder it is a dream production.

I enjoyed it, top to bottom — more than I expected, which is always nice. The voice overs were not as inane as they usually are; most of the protagonist’s depth came from the inner dialogue, which is unusual in a film. Cool costumes, too. Pictish witches! Tongueless trackers! It’s all good.

[…] than a year after Centurion was released theatrically on a small number screens, along comes another historical adventure film […]

[…] Marcus Nispel’s credit. You know who should’ve directed this? Neil Marshall. Watch Centurion and you’ll see what I […]