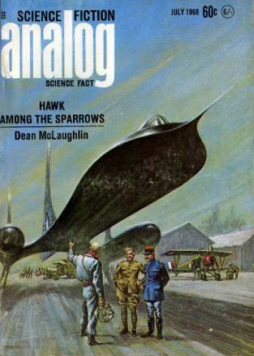 I’ve got this problem, see. I’m not the only one, of course, I’m sure you know all too many others with the same problem, only in different areas: gamers, motorheads, movie freaks, sports goobers, NASCarians, record dweebs, comic nerds, Star Trek dorks, computer yahoos, stereo-tweaks.

Me, I’m a book-geek. More specifically, a science-fictional book-geek.

If you know anybody like the above (and you do), you know that even with their widely differing interests, they all have one thing in common – they will drive you absolutely batshit telling you All About It.

You’re nodding your heads. Yep, you all know someone like this, many of you live with one, and more than a few of you are some variety of what used to be called “enthusiasts” yourselves.

I’ve been chasing people out of con-suites and rooms at parties for decades now, yattering on about pulps, writers, pseudonyms, artists, publishers, editors and trimmed versus untrimmed until people begin to back away, smiling desperately and looking at their watches.

‘Sokay, I’m used to it. Hey, you should see what happens when I mention deckled edges. Or start listing edition points.  But you know, there were always one or two guys in that room who stayed behind and listened.  Fellow geeks, anxious to hear all the minutiae and trivia I had stuffed into what few brain cells I had left after the ’60s.  An audience, if you will, that few other “enthusiasts” enjoy.

I’m one of the lucky ones, however. I’ve managed to find venues where I can share this accumulation of arcana, this accretion of esoterica, without having to raise my voice so that those guys over there edging towards the door can hear me properly. 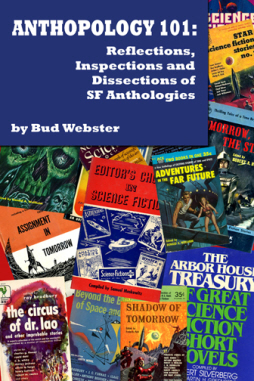 Back in the day, I used to do this in what we called “fanzines.” You kids today call them blogs, except that back then we cranked them out on mimeographs or spirit duplicators (a lucky handful of us had access to offset) on paper, page by page, collating those pages (a lucky handful of us were able to bribe a bunch of friends with pizza and bheer to help us) into stacks which we would then staple together, address by hand, affix stamps to and then mail them, like, through the air, from a post office. Old school.

Of course, back then we had to make our own stamps. You kids today don’t know how good you have it.  And get off my lawn.

These days, I’m fortunate enough to actually get paid for doing this with real money, and not just copies of other peoples’ fanzines with, hopefully, a few kind words about my own efforts.  My longest-running column, “Anthopology 101,” for example, puts classic sf and fantasy anthologies into historical context, both in and out of the field.  “Past Masters” examines individual authors who once stood high in the stfnal pantheon but have been eclipsed over the years. You can sample both at Phil Stepensen-Payne’s immaculately hip Galactic Central along with other worthy indexes, bibliographies, and assorted book-tweak goodies.  Alternatively, you can purchase the first collection of the “Antho 101” columns, pictured at left, from Merry Blacksmith.

Black Gate is the latest of those venues, and my contribution to its vast abundance of pages is a column about sf and fantasy writers you may never have heard of, worse the luck.

It’s not your fault, don’t get me wrong. Some of them only had a few stories to tell; some found easier, more financially sound ways of making a living; some became frustrated with the business aspects of the publishing industry; too many others died far too soon. 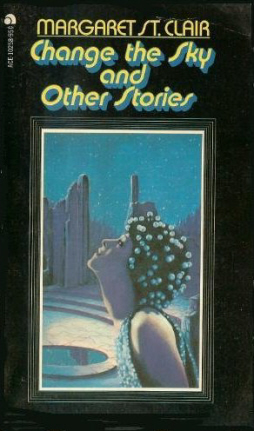 The common link between them is that, when they were active, they attracted the admiration of readers and critics alike. That, and the regrettable fact that their body of work, however excellent, didn’t outlast them.

Tom Reamy. Chan Davis. Richard McKenna. Dean McLaughlin. Margaret St. Clair. Rick Raphael. Wyman Guin. Walt and Leigh Richmond. I could go on, but it’s a more than a little depressing. Most of you won’t recognize more than one or two of those names, and are probably wrinkling your brows and wondering “Who?!”

That is precisely why I’m doing this, why I do all of it, and also why I’ve named my column for Black Gate after that very response: “Who?!” Don’t worry, quite likely they’d never heard of you, either.

I’ll present each subject’s history, life, and career; I’ll interview friends and family where I can, as well as their colleagues; and I’ll give you as complete a bibliography of their body of work as I can assemble given the resources I have.

My first article for Black Gate features Tom Reamy, author of San Diego Lightfoot Sue and Other Stories. It will appear in the upcoming issue, Black Gate 15.

Why? Because I do not want these worthies to disappear from the face of the Earth without doing something to keep their names alive and in front of a new readership.

Do you understand how important this is? These people, these writers spent time and blood telling stories, one of the most valuable (and least valued) tasks anyone can aspire to.

When they tell those stories well, with passion and wit, they deserve at least a tiny taste of immortality. 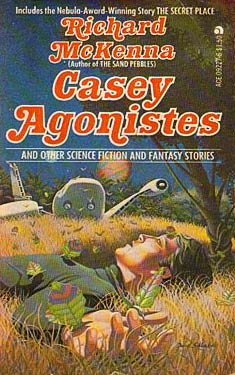 I’m just one guy, you know? But if I tell you, and you find a copy of Hawk Among the Sparrows or Casey Agonistes and you read it and like it, you may share it with somebody else; you might blog about it, or Chirp about it or mention it in passing on FaceSpace or one of the other e-hangs that exist on this InterWeb thing I keep hearing about.

Someone else’s interest might be piqued, and they’ll buy a copy off eBay or, preferably, from their local used-bookshop, read it, and then they might do the same.

And those fine writers, those ladies and gentlemen who fashioned those fine stories, might just get that taste of immortality; they might live a little longer in the imaginations of those equally fine people who had once wondered, “Who?!”

That’s why I do this. I want to share those stories, and the authors who wrote them. I want to infect you all with my enthusiasm, my passion, for a seemingly endless number of story-tellers who earned their time in the limelight – and never got it.

It’s the very least I can do to repay them for the joy and the wonder that they have given me over the decades.

Bud Webster is the author of Anthopology 101: Reflections, Inspections and Dissections of SF Anthologies published by The Merry Blacksmith Press.  He lives in Central Virginia with Mary, his extremely patient and understanding Significant Other, and three damn cats.

Splendid post, Bud. And you picked some terrific authors for your upcoming Black Gate columns.

I ordered my copy of Anthopology 101 hot off the press, and it is one terrific book. It captures the joy of reading and collecting classic sf & fantasy short fiction like no other work in a long, long while. Well done, my friend.

Agree with John there. It always amazes me when I pass by some old SF books and see authors whom – like you said – you say Who? to. Look forward to reading your column. Personally its only through articles like this that I have discovered authors I would otherwise never have known of, or have seen and not bothered with. Thats how I discovered Patricia Mc Killip – via a Dragon magazine article.

That July ’68 Analog cover is one of my favorite from them! I loved the story, too. It was the perfect intersection of my fascination with WWI aviation and science fiction.

Tiberius, check out the earlier columns at Galactic Central, link in the text above. If I’ve done my job right, you may discover one or two other “new” authors.

Jim, “Hawk Among the Sparrows” is one of my favorites, and Kelly Freas did a variation of the ANALOG cover for the book. I’ll upload it here when I turn in that column.

Intriguing post. It started me thinking again about unjustly unknown writers and books; how some writers just aren’t recognised the way they ought to be, and why that is. More to the point, it was actually invigorating, seeing the list of names you put forward — specifically because I didn’t know any of them! It’s always nice to find that there’s more stuff out there, waiting to be read.

Black Gate » Blog Archive » What I Do It With

[…] already know I’m a recalcitrant book-geek, right? Loads of books, scattered all over the house, piled up […]

[…] first online article for us was What I Do and Why I Do It in December of last year; his most recent was What I Do It With. His enthusiasm for — and […]

[…] Bud became the Poetry Editor for Black Gate in January 2011. He’s written several columns on bookselling and collecting here on the BG blog, including “Selling Your Books Ain’t as Easy as it Looks,” “Spreading the Word (or, “Book ‘em, Bud-O”),” and “What I Do and Why I Do It.” […]