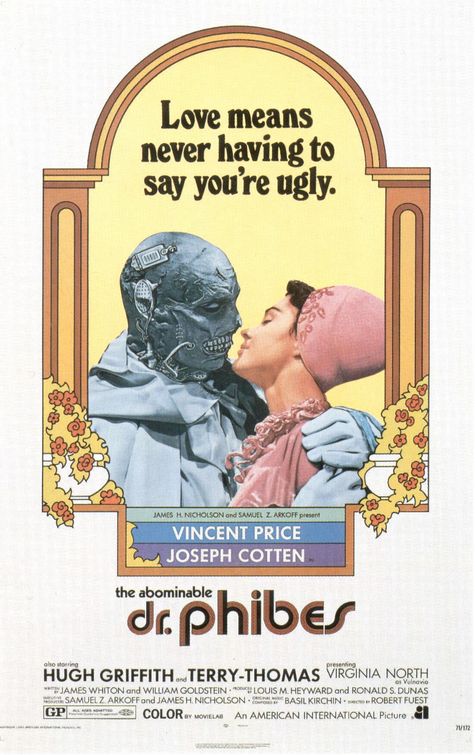 Dr. Anton Phibes is the mad genius played by Vincent Price in two cult classic films for American International Pictures in the early seventies. Director Robert Fuest imbued both The Abominable Dr. Phibes (1971) and Dr. Phibes Rises Again (1972) with a surprising degree of style and wit that set them apart from virtually all other genre films of their era.

The creation of screenwriters James Whiton and William Goldstein, Phibes was portrayed in their original screenplay, The Curses of Dr. Pibe (not a typo on my part, the character’s surname was subsequently altered) in a much more serious vein. Their intended film was both dramatic and horrific and much more in keeping with the tone of horror films of the early 1970s. It is a far cry from the blackly-humored, deliberately anachronistic 1920s period piece resplendent in Art Deco designs that Fuest delivered to AIP.

Dr. Phibes is said to hold doctorates in both music and bio-physics. Phibes is an acclaimed organist and composer and, in private, an eccentric and reclusive inventor. He is hopelessly devoted to his beautiful young wife, Victoria (played in both films by the lovely Caroline Munro) who dies on an operating table following a car crash that leaves her husband horribly disfigured with a literal death’s head in place of a face. 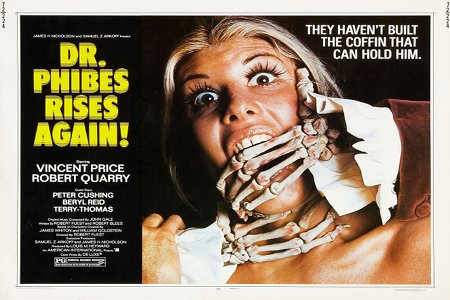 Victoria’s death drives Phibes insane. He allows the world to think him dead and sets out to exact revenge on the surgical team he holds accountable for her death. He employs the G’tach, the Biblical ten curses of Egypt as his means of assassinating each member of the surgical team. The murders are investigated by a hapless Scotland Yard detective, Inspector Trout (wonderfully underplayed by Peter Jeffrey).

Vincent Price turns in an amazing performance as Phibes. His character’s vocal chords were damaged in the accident. He speaks only with the aid of one of his inventions. For much of the film, Phibes wears a face mask (Price’s own face), but his lips never move while talking. Remarkably, the performance never suffers as Price compensates by conveying so much with his expressions.

Phibes, in Price’s hands, is frequently funny but never a figure of ridicule. He walks a fine line successfully and very nearly plays the part straight despite the campiness that surrounds him. Price’s central performance makes all the difference to the success of the film’s many diverse elements. The Abominable Dr. Phibes is blessed with a uniformly excellent supporting cast led by the legendary Joseph Cotton and featuring Peter Gilmore, Maurice Kaufman, John Cater, Hugh Griffith, and a hilarious cameo from Terry-Thomas. 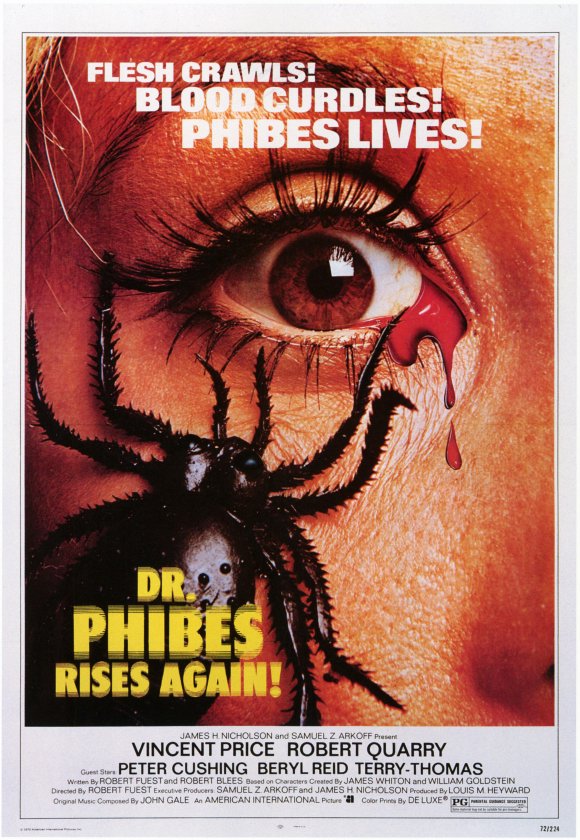 Phibes’ genius for invention is best illustrated by his clockwork orchestra and in his lifelike automaton, Vulnavia (played by the stunning Virginia North). Far more than just a mute companion to the widower Phibes, Vulnavia is his nearly living soul-mate. She plays a mournful violin to counterpoint his bombastic organ. Vulnavia is his helpmate in all of his mad schemes and shows real emotion only once, when she becomes the unwitting victim of his final “curse” and receives a blast of acid in the face.

Avant-garde jazz composer Basil Kirchan’s wonderful score is available on CD from Perseverance Records. A long out of print soundtrack LP highlighted the Clockwork Band’s performances with vocal impersonations by Paul Frees. Sadly, this is not officially available on compact disc.

While the finished film was drastically altered by AIP story editor, Robert Blees and director Robert Fuest, co-author William Goldstein wrote an excellent novelization for Award Books (titled only Dr. Phibes having lost the film’s article and adjective in the translation). The book manages to blend the more dramatic elements of the original screenplay with the uncredited story revisions by Blees and Fuest.
The film was promoted with a wonderful advertising campaign parodying Love Story (1970) and was a surprisingly strong box office success. The original authors, Whiton and Goldstein quickly turned to work on a sequel, provisionally-titled Phibes Resurrectus. The finished film, Dr. Phibes Rises Again borrows their story structure but was even more drastically overhauled by Blees and Fuest who were awarded sole screenplay credit the second time around with Whiton and Goldstein having to suffice with creator acknowledgement only. 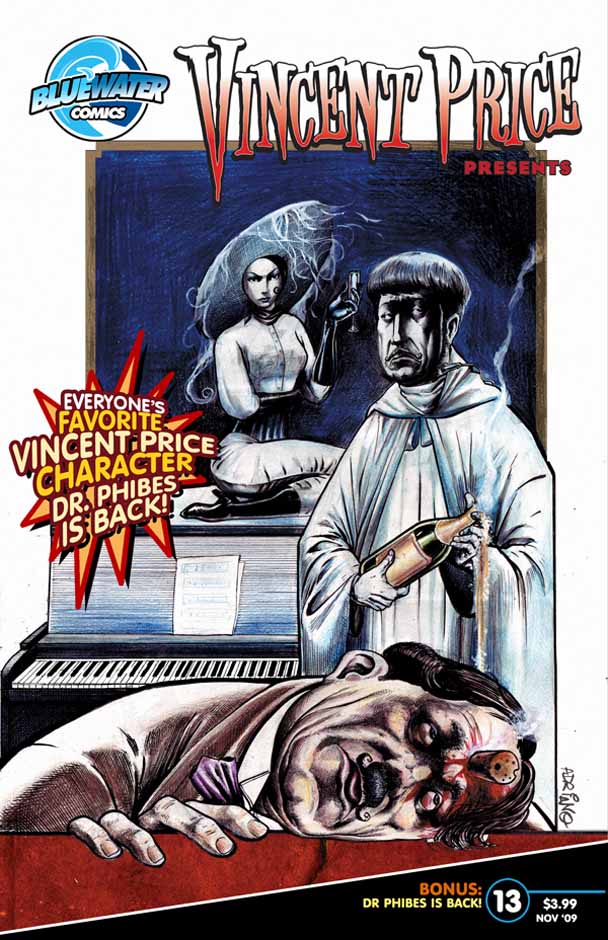 This time out, Phibes seeks an ancient Egyptian secret of immortality to revive his late wife. While admittedly, the film suffers in comparison with the first and Phibes’ resurrection is clumsily handled and glossed over with ham-fisted narration by Paul Frees, once the story starts moving there is much to enjoy in this second outing.

John Gale’s score is excellent (he had contributed without credit to the first film as well) and has also been released on CD by Perseverance Records. William Goldstein again produced a novelization for Award Books and while there is no mistaking that Phibes’ creators would have preferred less humor, the movie tie-in is still an entertaining read.

Sadly, the law of diminishing returns was in full effect at the box office and while Price subsequently attempted a variation on the Phibes formula with 1973’s Theatre of Blood, a third Phibes film failed to materialize. Whiton and Goldstein took their concept to television in the mid-1970s and developed a proposed series, Dr. Phibes which turned the character into more of a crime-fighting avenger in the tradition of The Shadow. Legendary comic book artist Jack Kirby prepared the concept art, but the idea died a quick death.

A decade later, Paul Clemens and Ron Magid attempted a revival of the property for New World Pictures. Vincent Price loved their story treatment, The Seven Fates of Dr. Phibes but sadly, the film remained mired in development hell. While the screenwriters understood what made the original work and produced a treatment that would have delighted Phibes’ legion of cult followers, New World Pictures understood that commercially Phibes could not successfully compete in a market dominated by horror franchises such as Halloween, Friday the 13th, A Nightmare on Elm Street, and Hellraiser.

Recent years have seen speculation of a remake, not an entirely encouraging prospect for most fans. The cult classic originals have remained consistent sellers on DVD. House of Phibes, a Yahoo Group devoted to the series exists and also has a presence on Facebook. The growing interest in the series has allowed projects like Perseverance Records’ soundtrack reissues to find a loyal audience and, in recent months, increased activity as Vincent Price’s centennial rapidly approaches in 2011. 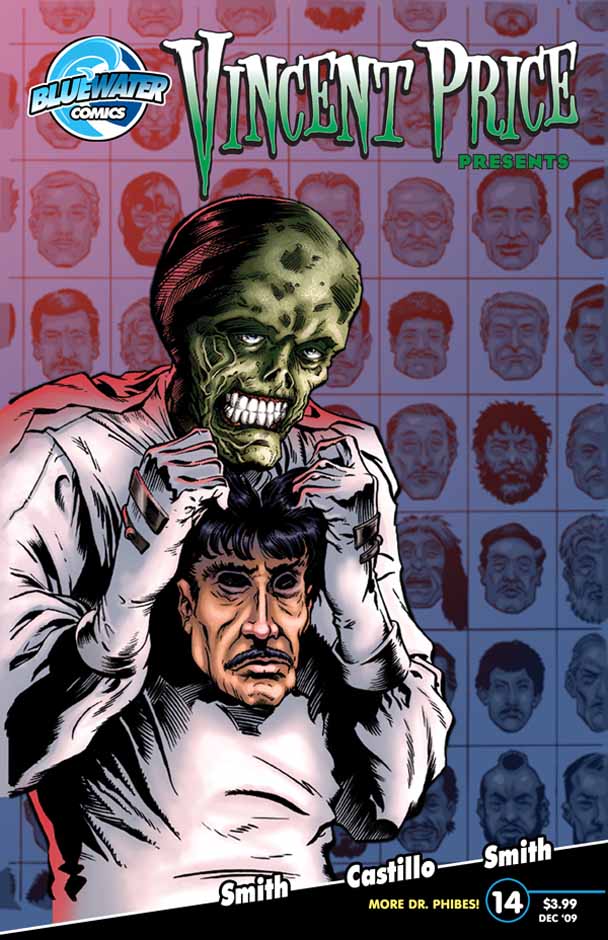 BlueWater Comics has brought the character into a new medium in the pages of their monthly anthology series, Vincent Price Presents. Issue 13 (November 2009) marked Dr. Phibes entry into the comics field in writer/artist Adriano’s one-shot, “The Deadly Comedy.” The story faithfully revived Phibes, Trout, and Vulnavia and included an amusing cameo by Edward Lionheart, Price’s character from Theatre of Blood (1973). The storyline introduced Phibes’ father-in-law, Thanatos who seeks to end Phibes’ reign of terror. A direct follow-up to the second film, Adriano incorporated H. P. Lovecraft’s Cthulhu Mythos and a version of the gorgon Medusa that showed the strong influence of Ray Harryhausen’s Clash of the Titans (1981).

Issue 14 of Vincent Price Presents (December 2009) brought aboard a different creative team in writers Mel Smith, Clark Castillo, and Paul Birch paired with artist Nadja Smith. The Phibes storyline was updated to December 1999 on the Eve of the Millennium celebrations in New York City. A now retired former Inspector Trout was trotted out along with his detective nephew, Jonathan to team with a hardboiled New York cop to investigate a string of apparent copycat murders that are, of course, the work of the original Dr. Phibes. The updated setting was a bit jarring and the issue ended on a cliffhanger that would not be resolved for more than a year. 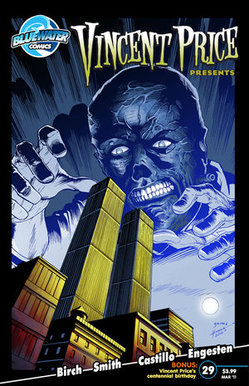 Happily, BlueWater Comics will publish the conclusion of what has now been titled “The Seven Lives of Dr. Phibes” in Issue 29 of Vincent Price Presents (slated for publication in March 2011). The writing triumvirate of Mel Smith, Clark Castillo, and Paul Birch will finish what they started with a new artist, Mats Engensten replacing Nadja Smith.

However, the biggest news of all for Phibes fans is the news that  Sentinel Productions is currently in pre-production on a film version of The Seven Fates of Dr. Phibes with Timothy Duckworth slated to write and direct the not-for-profit independently produced film based on the story treatment by Paul Clemens and Ron Magid for the unproduced third Vincent Price film mooted in the 1980s. Jared Balog has designed a perfect replica of the original Phibes mask for the film. While casting on this Phibes cultist’s dream project is still several months off, there is no better way to mark Vincent Price’s centennial than to find his legendary character still active on both the comic book and indie film front.

I prefer Theater of blood… you’ve got a who us who of great british secondary actors, Ian Hendry, Milo O’Shea, Robert Morley, Harry Andrews, Jack Hawkins, Michael Hordern… and Diana Rigg… humour and 70’s settting are great too, it could be interesting a article about it to complete this entry on Vincent Price…

sorry I tried to say who is who