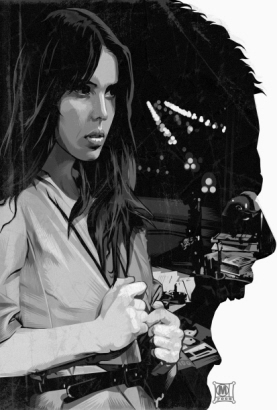 The third novella in Black Gate 14 was “The Natural History of Calamity” by Robert J. Howe, one of the most popular pieces of fiction we’ve published in some time. SF Site says:

This wry, stylish urban fantasy is narrated by Debbie, who is a karmic detective… she chooses to help a guy who is worried that his girlfriend Becky has taken up with a sleazebag named Michael who turns out to be part of Debbie’s past. What’s more, every encounter with Michael shipwrecks her own karmic balance… the tension mounts inexorably to a surprisingly poignant climax.

Every time Debbie tries to do something to level Becky’s or Mike’s karma, her own suffers. But she can’t figure out why; and by the time she gets wise, it’s almost too late. An original concept, as far as I know — and in some ways reminiscent of a feminine version of Jim Butcher’s Harry Dresden, in execution. A good, fun read… Recommended.

And Grasping for the Wind says:

Surprise twists, a significant dose of self-deprecating humor, and a no-nonsense first person point of view make this story hard to walk away from. From the little teaser at the beginning, to the depth of character and clever use of karma as plot device, Howe’s story is a real pleaser from beginning to end. My favorite of the magazine and one I highly recommend.

“The Natural History of Calamity” appears in Black Gate 14. You can read an excerpt here, and the complete Black Gate 14 Sneak Peek is available here. You can find additional reviews of the entire issue here.

Man, I really liked this story. Mr. Howe should write another one. And another one. All good things come in threes. Except when they come in fours. TETRALOGY!