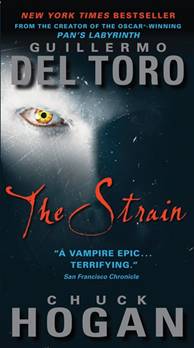 I believe everyone has something that unnerves them, which is not in your typical things-that-are-scary category. We’ve already agreed that clowns and little kids with blank stares rank high on the creepy index, but there are other more benign items that cause the hair on the back of our necks to stand up, mainly because they exist on the outside of the everyday.

Allow me to provide an example.

A few years ago I had an opportunity to visit Cape Canaveral in Florida for a night-time launch of the space shuttle. Though the event was scuttled by technical difficulties, there was something strangely frightening about the massiveness of the shuttle (and “massive” hardly does it justice).

This monolithic structure, sitting in the middle of an otherwise vacant launch pad and lit the way it was, seemed strangely terrifying. It didn’t belong there on what looked like a normal airport runway. It was gigantic and alien and out of place. I can’t explain it sufficiently, but I had nightmares about standing near it for several weeks after. Maybe because it was in a place my mind just couldn’t agree it should be, and that turned “normal” upside down.

It was because of the chill that comes from everyday things being displaced that I picked up Guillermo Del Toro’s latest paperback release The Strain to sustain me on a recent, long plane ride. In case you aren’t familiar with Del Toro, he is the owner of the incredible imagination that brought us Pan’s Labyrinth, which was turned into an Oscar-winning film in 2007. 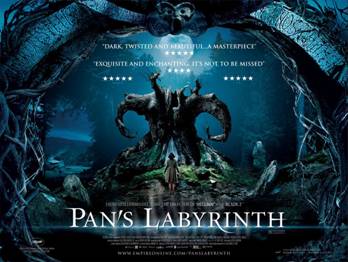 I was amazed to learn that The Strain, published in paperback this summer, was only his second novel, though its sequel The Fall has already appeared in hardcover. Both novels were co-written with Chuck Hogan.

What gave me goosebumps was what I read in the first few chapters while sitting in my local book store. Following this, there was no doubt The Strain was coming home with me.

The story opens with a transatlantic flight from Berlin, which executes a perfect nighttime landing at LaGuardia Airport, then goes completely dead on the taxiway.

After being unable to contact the cockpit by radio, a crew is sent to visually inspect the plane only to find it entirely without electricity or movement, and all the shades on the windows pulled down.

This is about the time the goosebumps kick in. 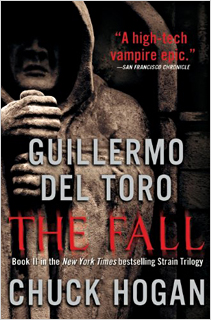 Much like how I felt about standing near the space shuttle, the vision of an enormous Boeing 777 sitting utterly still and dark in the middle of a taxiway screams “ominous” to me in a very bone-chilling way; I discovered it was for a good reason as I read on.

The plane is eventually blow-torched open and a Hazmat crew enters to find every passenger and crew member dead.

If that wasn’t eerie enough, they are all sitting bolt upright in their seats with perfectly calm expressions on their faces and their dead eyes staring forward.

Some couples are holding hands and parents have their arms around their children. The pilot and co-pilot still have their hands on the controls. All three-hundred plus people inside the darkened airplane have expired simultaneously in the matter of seconds between receiving landing instructions and successfully touching down; no apparent cause of death can be identified.

The bodies are removed and sent out to several different morgues across New York City. Approximately twenty-four hours later, they collectively disappear from their various coolers and gurneys, and the dead passengers from Flight 753 start arriving back in their respective households, toe-tags still affixed.

What we learn as The Strain hits its full magnificent stride is that secreted aboard the flight was an ancient evil which systematically murdered every soul in the plane. Though it is not immediately identified as a vampire, the conclusion comes quick once all the returning dead relatives start craving a snack.

The tid bits which keep this tale from turning into yet another blood-sucking yawner is that the undead are far more like zombie, eating machines leaving a trail of soon-to-be vampires in their wake. They aren’t lucid enough to be angst-y and they’re far from pretty or well-dressed.

At the first hint of sunlight they burrow straight into the dirt to wait out the daytime and then head right to the surface for another eating binge at dusk.

In every way, the creatures Del Toro has created behave like a virus (thus the clever title) which is spreading at a terrific clip.

As is fitting, the main protagonist is a doctor working with the Center for Disease Control whose personal story is woven cleverly together with certain family members of the plane’s victims. The Strain ultimately becomes a race against time as the doctor and his band of good guys slowly come to terms with the true nature of the “disease,” then attempt to locate and destroy the vampiric source of the outbreak before the human race is annihilated.

The Strain is not as cerebral as Pan’s Labyrinth and the only hidden parable might be that modern technology is no match for ancient evil. However, it was a heck of a story to be reading on a transatlantic flight, especially after all the cabin window shades were pulled and we headed into the pitch dark northeastern sky. 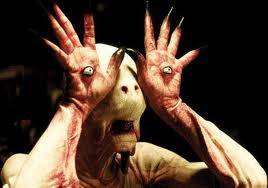 Though this setting is not necessary for maximum enjoyment, I chewed through the entire book with zombie-like enthusiasm, passing the ten-hour trip in a flash. I am looking forward to picking up the sequel and sort of hoping Del Toro is cooking up a film version since he has a track record of doing justice to his own stories on the big screen.

And speaking of that, do watch Pan’s Labyrinth if you haven’t already done so. It’s a supremely creepy fairytale that is most definitely not for children (imagine a demon with no eyes in its face, but in the palms of its hands instead, eating pixies like they were Twizzlers).

Am I alone in finding displaced normality frightening? If not, leave a comment about what gives you the willies or drop me a personal note at Sue@blackgate.com.

And if so, no worries! Drop me a line anyway and be a part of Goth Chick News’ one-year anniversary post coming next week!

I love Del Toro’s stuff. Have you seen The Devil’s Backbone? There’s just this huge unexploded missile buried in the middle of the orphanage’s courtyard for the entire movie, and whenever the kids pass near it, it mutters and clunks. It. Just. Sits. There.

I had a dream once that my best friend was curling my hair with an old fashioned curling iron, and then the whole feeling suddenly shifted, and she leaned close, whispering, “Gray hair! Gray hair!” and burned the back of my neck with the iron.

That was commonplace and scary. She’d never do it real life of course, but I don’t think I’ve used a curling iron since!

hey in a spanish forum a woman mentioned that maybe her greatest phobia is when she is swimming and is some meters into the sea look at the bottom and see something sunken like a ship or something like that, and it happens to me too I can’t see documentaries on submarine archaeology
and now some questions
have you read The passage by Justin Cronin? and The rising by Brian Keene?
your article as usual funny and interesting

Dear CES,someone yelling “gray hair” at me qualifies as something a step above a nightmare. Add a curling iron to that and it a full on 80’s night terror… Oh the humanity!

Francisco, I haven’t read either of those but thanks for the suggestions. I’ll definitely look them up. As for seeing the ship beneath the water, I’m with you on that one. “Ghost Ship” had a scene that stuck with me for at least a week. Big,vast ocean stuff is way creepy