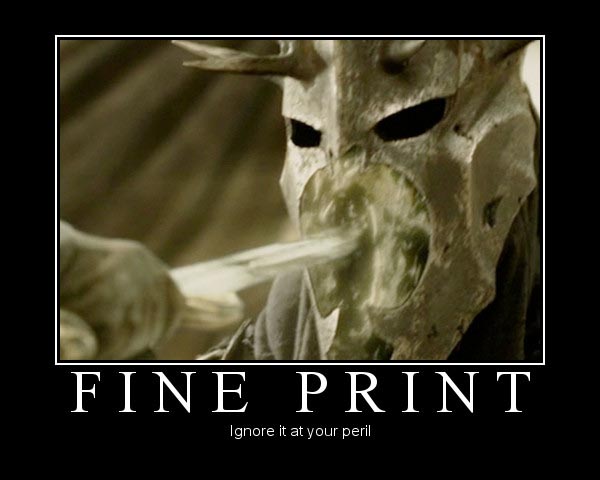 The false motivational poster to the left has nothing to do with the rest of my post today, except that it came as a reward to myself after a week of tough self-disciplined writing, aided by the simple power of time awareness. As I finished my enormous work on late Sunday evening, I celebrated my triumph with a small but exquisite waste of time, creating one of the many “demotivational posters” that travel around the ‘net as humor or an approximation of humor. Better than LOLCats, at least. This is my deep inner Tolkien Geek, who has always wondered what the Lord of the Nazgûl thought as he died under Éowyn’s blade on the Pelennor Fields. My guess: “Damn fine print!”

It’s little time-waster rewards like this that make getting through heavy writing projects just a bit easier.

But the real writing-aid VIP for me, and which has been a tremendous help since I started using it about two years ago, has been a time log. I’ve written previously about how I did revising “on the clock” for National Novel Editing Month (a March event—edit for at least fifty hours during the month) by turning on a desktop stopwatch whenever I sit down to do any writing or editing. I hide the clock, and have it set to chime at the half-hour. I use Apimac Timer, a Mac OS X application, for the stopwatch. For specifically timed exercises, I use a countdown on the same timer. After each work day, I record in a notebook how much time I’ve spent working, and my word count (if applicable). Apicmac Timer also also you to record a log on the program and not lose count of the time you spent

This sounds a bit mechanical, but I’ve discovered that it has taught me the value of using my time well, and feeling that I must focus and can’t allow distractions. If I stop to do anything, I pause the timer before I do it. This way, I can always see how much out of the day I’ve actually spent writing, and how much more I should do. The time log in the notebook reminds me of how I’m spending my time, and scolds me if I let it lag. Guilt is power—especially in print.

Writing toward the half-hour bell also yields a benefit: if I say to myself, “I’ll take a break at the next half-hour chime,” I always finds that I keep writing even after the bell. I start to think, “Oh, I’ll go a few more minutes, since I like the part I’m on,” and before I know it, the hour chime comes in. Eventually I take a break, but if I don’t force myself to stick to the chimes, I usually work more than I thought I would.

Using this form of “clocking in,” making writing into something I sit down and commit to doing, rather than just nibbling at it here at there between watching episodes of Black Adder on DVD, has upped my dedication and my output. And I am sure it has made me a better writer. It had also taught me how to make the most use of my time. It’s been said that “finding time for writing is impossible.” I believe this is true. You have to make the time. The better you know how your time is used, the easier it is to make the time.

And there’s nothing better than seeing how much you’ve spent at the craft after a week of really putting yourself into it. Writing as art can’t be quantified, but time spent on the art can be, and my attention to this had made me a much more dedicated author over the last two years, and certainly a more skilled one for all that practice.

So, for all writers who feel they aren’t getting as much done as they should . . . break out the stopwatch and the log book, punch in, and start putting out.

And reward yourself at the end with your great geek love. But make it a creative award as well.

Now excuse me, but my time log says I should be exhausted. And I am.