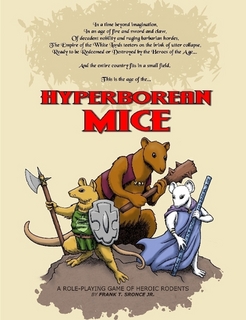 Am I a bad gamer if I really, really want to play this game?

I mean… a role playing game of heroic rodents, tiny critters struggling valiantly against barbarian rat tribes, gargantuan predators such as foxes and owls, legendary horrors that prowl the land, and foul sorcery.  All in Conan’s backyard.

Just listen to this product description:

The ancient White Lords, albino mice with magical powers, rule over the valley of Hyperborea, but their empire is crumbling. Barbarian rat tribes, deadly predators and political intrigue threaten to bring their mousy civilization to an end. Terrible predators like foxes and owls take the place of giants and dragons. Voracious shrew clans raid the Fallows, seeking mice and rats to fill their larders. Centipedes scuttle beneath the underbrush, seeking prey. Hawks force the inhabitants to stay under cover during the day, while owls stalk the sky at night… Legendary horrors stalk the land, unique predators with potent magical abilities of their own. The terrifying Mocker, a centipede whose only voice is the imitated cries of his victims. The serpent Ssaaa gathers a cult of worshipers to do her bidding in the valley. And no mouse dares stand against dread Hoorooru, the ancient ruler of Rookswood and the enemy of the gods.

It’s like Robert E. Howard was hired to write the screenplay for The Secret of Nimh. Scott Oden reports that it’s “Filled with REH and Lovecraft homages! Like an owl that’s worshipped as a god by clans of savage mice.” I got chills, I swear.

Hyperborean Mice was written by Frank Sronce and published by Kiz and Jenn Press. It’s 102 pages, and is available as a softcover book from Lulu.com or as a digital download PDF from RPGNow and DriveThru RPG. Show it some love and check it out, and let me know I’m not crazy.

I saw this when Scott posted about it on Facebook. Man, I would so play this. I wish there was an option to buy a print version (which if I missed it, please show me). I’m not big on reading PDFs personally.

Uh…guess I should pay more attention to your blog post…

That almost made ME want to be a gamer. Sheesh. While camping this weekend, the Rats of NIMH came up several times. My companion and I both admitted to having major crushes on the Rat Justin. This seems like the perfect opportunity to embody someone very like him…

I’m with you. I was bummed there wasn’t a print version (DriveThru RPG sells only the PDF version, and that’s what Scott’s post pointed to). But when I visited the main product website, it pointed me to Lulu for the print version: $18.99 for 102 pages, and I think the Lulu “free shipping” offer runs until the end of August.

I bet I’d have no trouble getting my kids to play this with me.

Stop bragging about your camping trip! I wasn’t invited, so I don’t want to hear about it.

I had a crush on Teresa, the cute girl mouse, but she grew up to be Shannen Doherty. That’s all kinds of wrong.

Were you writing on this trip? Any trip to “Devil’s Lake” should have triggered lots of inspiration.

Ah, John. I wrote a few more scenes in “The Big Bah-Ha, the Musical.” Right now the Flabberghast has just finished singing his bone song, and Beatrice is about to bite the big one.

How do you write a musical? Oh, that’s so strange. I would have loved to watch that. I bet you were humming, and tapping on logs ‘n crap while you scribbled down lyrics, and driving Karin crazy.

“Hither came Mousanan, the Cheesemerian, black-haired, sullen-eyed, sword in hand, a thief, a reaver, a slayer, with gigantic melancholies and gigantic mirth, to tread the jeweled thrones of the Earth under his pawed feet”

Karin was studiously writing in her journal about how I was the Devil’s Bride with dead flies and algae in my hair, and how she was the Great Acornkicker and Train-track-trekker, etc, to notice my insane scribblings.

(Besides, I can’t write music. I’m not that cool. I’m still searching for a composer. Importuning all my musician friends, batting my eyelashes, etc. I’m writing a lot of lyrics, which I would present to a REAL composer/lyricist as an offering, and say, “Go to town, babes. Scratch it or use it for scaffolding or whatever.”)

In short, Karin and I were both too busy laughing and far too high on clean air and pine cones (and possibly hallucinating from an overindulgence in mosquito bites) to drive each other crazy. It was great times. She was reading “Flora’s Dare” by Ysabeau Wilce (AMAZING FANTASY WRITER AAAUGGGHH!!!) and I was reading Kitty Norville the Werewolf DJ Books. Best time ever. The moon was like a spotlight, and the tiki torches burned…

Totally agree with you about Ysabeau. I attended a reading of hers at Twilight Tales and was instantly smitten. Man, that girl is going to conquor the publishing world. We need to interview her, right quick. If only I had a suitably willing Black Gate correspondent, hinty-hint.

Speaking of BG assignents, what’s the 411 on my GOBLIN FRUIT article, Cooney??

Did we not agree that August 31st was my deadline for the Goblin Fruit article?

However, you called me “Cooney,” and I am helpless against that.

You’ll get it after this weekend. I have staked out couch-space at TWO different houses with Internet on BOTH my days off, and will be spending most of my time working on it.

It’s not something I can write, alas, without the internet.

Now. Wait til I pass my deadline before you start scolding me. SO MUCH PRESSURE!

I’d love to interview Wilce. Maybe in October, because her hair is red.

I wasn’t scolding you! I was just, y’know, enthusiastic. Underneath this gruff, deadline-lovin’ editor shell, I’m just a fan dying to read about GOBLIN FRUIT.

And an interview with Wilce would be splendid in October. I didn’t know you knew her. Do you know everyone??