Part One: The Adventure Begins 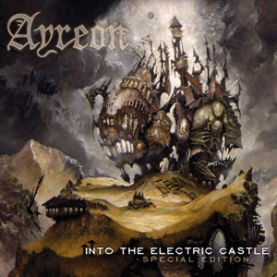 There’s this thing I do when I know a given task will be difficult. I announce my intentions. Loudly, casually, on Facebook, in blogs, emails, telephone conversations.

I talk about my task (usually self-appointed and with no particular due-date) blithely, in capital letters, as if the execution thereof were going to be the easiest thing in the world, done up all djinn-like, in the twinkling of an eye.

Then comes an indeterminate period of time wherein I do nuthin’ at all.

So a while ago – I won’t say how long – I mentioned somewhere that I wanted to write a blogicle about Metal and Fantasy.

I said it once. I repeated it often. I went about soliciting interviews on the subject. I coaxed tutorials in remedial Metal out of long-suffering friends. I spent endless midnight hours with a notebook in my lap and a double bass beat booming from my speakers.

Oh, I don’t know. Because I’d never done it before?

Or, maybe because until recently I neither knew (nor cared) very much about Metal as a genre of music, but that, having once flung myself like Odysseus into this siren’s nest of myth and reverb, I cried, “Tie me to the mast, boys; I’ll hear this stuff if it kills me!”

Or maybe because although I know Metal will never be my favorite music, will never rest easy in my ear, although I came to Metal as a stranger in a strange land, I have grown utterly fascinated by its whimsy, its theatricality, its sprawling subgenres, its deceptive intricacy, and its (forgive me) epic ties to the Fantasy genre I so love.

To give you an idea of the scope of what I’m dealing with, I will quote you my friend Pete. In a letter responding to my insouciant claim that I would soon undertake to blog about this Metallic subject, he wrote:

You have probably by now realized that Metal consists of a myriad of genres, perhaps more so than any other music. Off the top of my head, I can think of speed metal, thrash metal (my fave), power metal, black metal, death metal, doom metal, gore metal, pagan metal, folk metal, gothic metal, grunge metal, progressive metal (another fave) industrial metal, sludge metal, hardcore, metalcore, deathcore, and grindcore… And I forgot the best metal of all. The Scottish pirate metal of the band Alestorm. 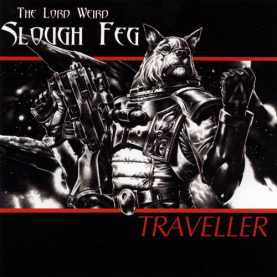 Sounds like a story in Black Gate, doesn’t it?

Now, no way in one short (ha!) blog can I conceivably cover all of Metal – or even the portion of it as pertains to the Fantasy genre. n00b that I am, I even knew that going in. So I thought (I had help thinking this) that I’d split this whole idea into three separate blogs, and I’d start out the first with Sam.

Sam is a musician, currently attaining his Masters in Business Administration, after undergrad work in Music Business. He has been a journalist for The Gauntlet and is part owner of the website Maximum Metal. He can speak German, wears a brass mermaid for a belt buckle, and has an encyclopedic knowledge of all things Metallic. 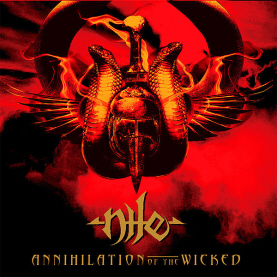 Sam that he is, he promptly showed up with six CDs in a plastic Reckless Records bag. He could not, he explained when I glowered, have brought fewer.

(Even now, he warns me that truculent readers will call me a poser and threaten me with battleaxes because I did not mention Nile’s “Von Unaussprechlichen Kulten,” from their album Annihilation of the Wicked, or (The Lord Weird) Slough Feg. Nor even nodded in acknowledgement of the existence of such bands as The Sword, Bal-Sagoth and Blind Guardian. Y’all will just have to forgive me, please, and bury your battleaxes in someone else’s skull. I’m just a lowly beginner.)

The six CDs were:

For three months that Reckless Records bag sat malevolently on my desk. I could feel it staring at me. 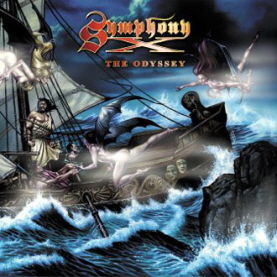 So one night I rang up Sam’s cell phone and left him a long obnoxious message.

“Sam. I’m totally intimidated here. You have to come over and listen to these things with me. I’ll never do it on my own. I’ll just end up putting on Jane Eyre the Musical for the 20th time this week and never grow as a person.”

Intractable in most circumstances, Sam is but putty in the mighty hands of Metal. He obliged by showing up at my apartment one dark and cold winter’s night.

You really need to check out blind guardian…They even have a song about dragonlance! and, if i’m not mistaken, a whole cd that just has songs about the Silmarillion. I also enjoy Kamelot and Sonata Artica. Have fun walking through one of the best genres of music

Thank you for the suggestion! It is a MIGHTY genre!

There certainly are many spiffy Metal videos. My romantic, metal-listening daughter played me Nightwish’s cover of “Over the Hills and Far Away,” for instance (keep watching past the intro–the drama unfolds!), and from there we moved on to Nightwish’s “Amaranth”, another storytelling video.

Being even n00bier than you, I clicked through the 6 albums noted and was glad that at least 2 of them had some music available for me to listen to (Odyssey & Electric Castle). I wish I had my own Sam to come along as interpreter on this new journey. thanks for hailing from other shores! ~Sita

thank you Asakiyume and daughter, for your lighthouse to the videos. I also watched Nightwish’s video of “Phantom of the Opera” omg I loved it! ~Sita

Thanks for linking that!!!

Blind Guardian is pretty much the greatest band of all time. They are the definition of epic, frequently using 90 piece symphonies and an extremely large amount of overdubs. They have songs about Dune, LOTR, Bladerunner, The Iliad, The Silmarilion, Dragonlance, A song of Ice and Fire, The Eternal Champion (Elric, mostly), E.T., Otherland, The Wheel of Time, Stephen King books (The Dark Tower, Tommyknockers, etc), The Death Gate Cycle, The Once and Future King, and a million other things. They also sometimes invent their own fantasy stories and sing about them (see: And The Story Ends) they are simply the greatest. (Also Alestorm is amazing)

if you want fantasy related songs, just look for power metal bands. Manilla Road has songs about Conan and Power Metal has a strong association with the High fantasy genre, many power metal album covers depict warriors riding dragons and whatnot

I see this’ll have to be a lifelong love affair. Just me and a bunch of Metal at midnight…

I should possibly invest in headphones.

“Dart Moor” is one letter away from a SITH NAME! Awesome.

They got style, anyway. That much I can tell from their pictures. 😀

The words “symphonic metal” are very stirring, I think. You could conjure with ’em, given half a chance and a magic wand.

Nightwish! Sweet!
Hammerfall!
Summoning!!!
Kiuas!
Amorphis!
Rhapsody of Fire!
…and now thanks to you COONEY, I have lost two hours of time never to be regained!!

Alestorm is cute but the definitive pirate metal band is Germany’s Running Wild.

Second the recommendations of Blind Guardian, particularly their Nightfall on Middle Earth album, and Manilla Road.

Any serious discussion of fantasy and metal has to involve Ronnie James Dio, who used to literally slay dragons on his concert stage.

Wait a second… Dragons are REAL!?!

And Ronnie James Dio was slaying them ONSTAGE???!!!

Isn’t there a “Society for the Prevention of Cruelty to Dragons”?

Maybe that could be my band name…

In metal all things are possible 😉

Looks like a promising start! Personally I’d plump for Blind Guardian over Rhapsody in that list of six, but each to their own. As a metal fan, I’m eager to find out where you going with this. I mean … as your friends have told you, metal is a vast, vast field. I’m even kind of uncomfortable identifying myself as “a metal fan” because I know there’s so much more stuff out there than I actually listen to. Are you looking to learn about the genre? Learn about fantasy elements in metal? What kind of metal do you find yourself listening to?

In terms of suggestions … I’m a big fan of beginning with the beginning, so if you end up looking for more music, I’d suggest going back to Black Sabbath, Iron Maiden, maybe Rush (my all-time favourite band, but opinions vary on whether they count as metal; I say ‘yes’). You can try stuff like Hawkwind and Blue Oyster Cult, both bands that are sort-of early metal and both of whom collaborated with Michael Moorcock. For more contemporary stuff, I’d suggest Kamelot, Skyclad, and if you like gothic-tinged stuff, then definitely Opeth. Oh, and there’s an Australian band called Alchemist who are quite brilliant.

Oh, and also as somebody mentioned above, Amorphis is excellent, with songs based off the Kalevala and Finnish myth. Also, I agree with the Manilla Road comment, and I want to recommend the Crystal Logic CD, which I think is the best of their albums.

and what about the italian power metal band Domine? their album Dragonlord, tales of noble steel is dedicated to Elric Of Melnibone by Michael Moorcock and Aquilonian suite in Black runes emperor is dedicated to the film Conan the barbarian by John Millius…

See, if you lived in Chicago, I’d throw a “The Genesis of Metal” party and ask you to bring a whole heap o’ Metallic beginnings, and I’d sit there with my notebook open and a slightly frazzled expression, and then BINGO! Bloggage.

As it is, I shall keep your list for reference and hope someday to plumb the very depth…

So – THANK YOU! “Amorphis” in particular sounds interesting to me.

I admit to having a Big Ol’ Crush on Elric of Melnibone and once wrote him a lovepoem.

So you can see I’d be very receptive to LISTENING to an even BIGGER lovepoem to him, complete with GUITAR SOLO and DOUBLE BASS BEAT!!!

Gosh, I love those drums. I think I love ’em best of all.

If i get the chance, I’m totally checking Domine out. Thanks!

Black Gate » Blog Archive » It Droppeth as a Heavy Metal Unto The Place Beneath: Exploring Fantasy in Metal, Part II

[…] genre ever, Fantasy. The long and fraught road leading to this nocturnal excursion can be found here, if you care for a saga’s […]

[…] Part One and Part Two of that adventure can be found here on the Black Gate blog. […]

[…] have been among the most popular features we’ve offered, including her 3-part examination of Fantasy in Metal, her detailed looks at Goblin Fruit and Ideomancer, and her lengthy interviews with S.J. Tucker, […]