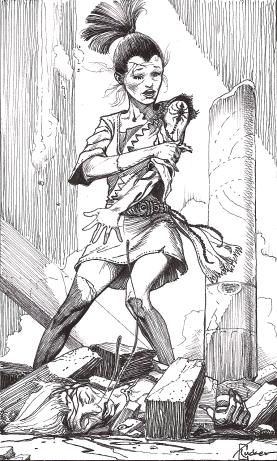 Naia was pinned under the rubble when the quake hit, trapped with the cruel sorcer, Cer Vassir. And then her nightmare truly began.

The blood on her fingers was alive. Tiny black specks within the viscous fluid writhed like mosquito larva. She sensed its hatred for the cold air. Hatred and fury.
“I need you to touch me one more time,” the sorcer said.
Naia heard nothing, only saw. How she could see the things in his blood she didn’t know; they were smaller than grains of flour. Yet they wriggled like the sorcer’s spider-glyph. Her eyes drifted to it.
“Good. You know what you must touch.”
The glyph slithered across his shoulder, turned on the incline of his neck, and returned to its original place, its eyes glowing cinders, its back gleaming sapphires.
Touch it.

Mike Shultz’s first fiction sale was “The Thrall” in Black Gate 9, which HorrorScope called “complex, emotional fantasy at its finest.”

Mike’s first novel, Sword of Memory, will be published in German in 2010 by Piper Verlag.

“Freedling” appears in Black Gate 14, coming in February.  You can read a more complete excerpt here.

This patience thing is NOT for the faint-hearted.