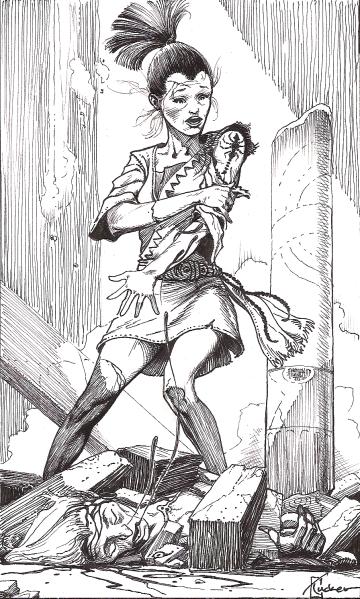 Naia sat back to inspect her work, hoping desperately that Cer Vassir would like it. She had chiseled a façade of vines and serpents into a stone support column in his tower’s central chamber. Only a small section of unhewn marble remained. What a relief it would be to finish. She was only thirteen, so working for Cer Vassir was a privilege, and at times she enjoyed it. But he scared her, too. It wasn’t just that he was a sorcer. It was the way he looked at her, a gaze that seemed to say, “You belong to me”, even though she was a freedling and didn’t belong to anyone. She liked it best when he wasn’t around.

The wide, high-ceilinged chamber took on more life and definition every day. Flagstones laid, doors attached, sconces set in the walls… Naia took a moment to gaze around at their work. The other artisans were older, and their craftsmanship seemed flawless to her. But even a few of them had suffered stinging criticism from Cer Vassir. She hoped that he—

“Freedling,” a firm voice said from behind her.

She cringed and turned. Cer Vassir stood behind her, resplendent in his golden robes. Sorcer-glyphs covered his bare muscular arms; a flamege-whip hung at his waist. A sorcer’s page lingered behind him.

“Yes, great cer?” Naia said, her voice trembling. He was going to yell at her for daydreaming, maybe even dismiss her without pay, like he’d done to another lazy worker.

“You won’t have time to fix your mistakes if you’re idle. And you have quite a few mistakes to–“

Something struck him on the head. As he looked up into the tower’s heights, Naia heard a clatter of pebbles striking the flagstones. Then, a grinding sound reverberated through the entire tower.

Even as he spoke, a chunk of ceiling the size of a horse fell from overhead. Naia and Cer Vassir jumped back, but his page was too slow. The stone crushed him with a sickening crunch. The spray of debris from its impact stung Naia’s face and arms.

The other workers scattered like roaches from light. Naia was farthest from the door, and she feared she’d never make it, but she bolted for it anyway.

Cer Vassir grabbed Naia by the arm, halting her flight. An instant later, another fragment of ceiling landed in front of her.

Naia looked at him, surprised, but obedient out of fear and habit. And he’d saved her life. He turned away and stared at his dead page.

Her last thought was confusion at the stricken expression she saw on his face. Then rubble fell like rain, and there was no avoiding it.

“— told you to come here, freedling,” Cer Vassir was saying as her eyes blinked open. “Kill me.”

Darkness with a trace of light. Where was she? Her mind struggled to make sense of the indistinct gray shapes around her. Then she remembered. The tower had collapsed. The walls of the chamber had transformed into rubble, all exits blocked. Jagged sections of walls and ceiling leaned over them on all sides, leaving a pocket of space a quarter the size of the original chamber, and barely higher than her head.

Naia struggled to her feet and stumbled through the wreckage toward the sound of his voice, putting her hand to her throbbing head as she went. There was a lump, and sticky blood. How long had she been unconscious? And how long would the ceiling hold?

She came to her column, or what remained of it. Her work was ruined. She shook her head. At least she didn’t have to fix her supposed mistakes. As she rounded it, she saw a brighter section of the chamber.

Her eyes fell on him before he answered.

He lay on his back, his right side buried in the rubble, his golden hair tangled in a heap around his head. Blood coated his exposed arm. Heavy debris covered everything else.

Naia’s hand shook as she put it to her mouth and backed away. She’d never seen so much blood on a man, let alone a sorcer. Her third-mother told her once that sorcers couldn’t die, but she doubted it now.

Then she saw the light source—his flamege-whip. It lay beyond his outstretched hand as if he’d used it and then dropped it. Long strings of tiny numbers inscribed its gleaming handle, and its five metal tethers terminated in crimson flameges that glowed like candle flames.

“Girl, I told you to come here. Get a rock and smash my head. I don’t have much time.”

“Stupid girl,” he said, his tone suddenly angry. “I told you to—“

A tendril of dust spiraled down from the ceiling onto his face, and his words became a fit of coughs.

“I’ll put spirits in you,” Cer Vassir said when the fit ended. He stared at the ceiling with glassy eyes. “Spirits that will make you claw at your face and gouge out your own eyes. I’ll put a legion of demons in your belly that will eat your flesh and leave only your bones. Now, for the last time, come here and kill me!”

Naia realized then that he’d been yelling the same command while she was unconscious. She’d disobeyed a sorcer. The penalty for that was death. It didn’t matter that she’d been unable to obey.

The glyphs on Cer Vassir’s free arm and shoulder began to glow. His bloody hand lifted, trembling, and reached for the spider-glyph on his shoulder. But a fresh trickle of blood oozed from an odd lump on his forearm and he cried out sharply, his hand falling back down. Then his fingers, still shaky, curled up to touch a serpent-glyph on his palm.

Naia turned away. Looking at him made her sick to her stomach. Tears streamed down her face. She had to ignore him. Maybe if she found a way out and got help, he’d forgive her disobedience and let her live. She began a search of the chamber.

Nothing. Not a single pinprick of light from outside. And the task was harder than she’d expected. It was too dark, for one, and she was having trouble concentrating. Strange voices kept popping into her head.

Obey, said one of her fathers. You must always obey sorcers. Then she heard her third-mother: Don’t shame us. Do whatever he tells you.

The voices seemed like memories, but her parents had never said those exact words to her. Or had they? Naia squeezed her eyes shut, trying to block them out. For a moment they subsided. She started carrying rocks away from the spot where she thought one of the doorways had been. But soon she found herself tugging at a fragment too heavy to budge.

“There’s five thousand stones beneath that one, girl. Fifty thousand.”

His voice startled her. For a moment it had sounded like one of the voices in her head.

He’s right, said a chorus. A mental image came of her twenty-three sisters gathered around her. You can’t escape. The other workers are too stupid to dig you out. Listen to him.

Something wasn’t right. Her sisters didn’t know the other workers. Naia turned to face Cer Vassir.

“You can’t trick me,” she said, amazed at her own boldness. But if he died it wouldn’t matter, and if he lived he’d sentence her to death anyway.

“You stupid bitch. Come here!” He arched his neck and tilted back his head so he could see her, his eyes glinting like the points of knives.

Do what the sorcer says, her grandmother said. Don’t you love us? You know what sorcers do to those who disobey. He’ll take his anger out on us.

That thought stopped her cold. Her family meant everything to her. And if the voices were coming from Cer Vassir, as she suspected, the threat was real. He’d kill her family if she disobeyed.

Her pulse pounded in her ears as she made up her mind. She wouldn’t do it his way; she was too afraid to get close enough to smash his head with a rock. But his flamege-whip was long and deadly. Before she had a chance to change her mind, she strode to it and bent down.

“Touch that and you will die, freedling! Only sorcers can wield flameges. It will rip your soul apart and scatter its pieces to the five corners of the world —”

Too late. She’d grabbed the handle.

The complete version of “Freedling” appears in Black Gate 14.

One thought on “Fiction Excerpt: “Freedling””