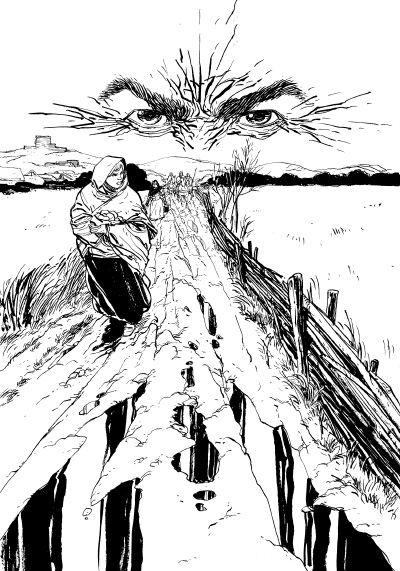 As Ramalia hurried away, she sniffled and belched. She hoped no one heard — they might realize that it was a mild Reckoning for a Thrall.

A backward glance told her that she had barely escaped. Two Wardens of the Consul stood in the market square questioning the merchant, who obligingly pointed in the opposite direction, obedient to her Thrall. Ramalia smiled grimly and darted around the corner.

Freescha, her daughter, would ask how she’d paid for so many potatoes. Ramalia had no money and hadn’t been able to obtain work today; Freescha would ask about that, too. But they would eat tonight. If only Ramalia could Thrall Freescha into not asking questions — it would be easier than lying to her.

Mud-brick buildings gave way to fields. Ramalia fought down a false sense of relief. Escaping town was fine, but she wouldn’t be safe until she reached the woods. Her pace quickened.

She found herself wavering between acting normal and glancing back to look for pursuers. But what did she have to worry about? She saw the Wardens dash off in the wrong direction. When they didn’t find her, they wouldn’t know where to search nextÃ¢â‚¬Â¹unless they thought to ask other people in the marketplace if they’d seen her. Surely no one would remember a plain peasant woman in a tattered shawl.

Five Wardens on horseback, exiting town. She hunched her shoulders and scurried faster, glad that there were a few other people on the road nearby.

A shouted Thrall came across the barley fields: “Whichever woman stole the potatoes, turn back!”

Idiots. Their Thrall was almost pointless at such a distance with an indefinite target. Even Wardens didn’t have much power under such conditions.

Hoof beats thudded. Ramalia clutched the sack of potatoes to her stomach, hoping they couldn’t see it. Five of them! Why not just two or three? If only another horseman emerged from the woods up ahead — she would Thrall him into taking her double and gallop away. She had to escape, for Freescha if not for herself.

Ramalia glanced back again. The Wardens were questioning some youngsters who passed her a short time ago. One of them pointed in her direction.

Ramalia broke into a run. She still had a chance if she reached the woods in time to hide. Something inside her chuckled at the thought. Five of them. What was she going to do, Thrall a tree into taking her inside its trunk? Even the Consul couldn’t Thrall a tree — trees were as Thrall-less as her daughter.

The hoof beats closed rapidly. The woods seemed far away. She realized that even if she reached them, she might not have time to hide. The Wardens would Thrall her into submission; Freescha would get no dinner. It wouldn’t take her daughter long to realize what had happened, and then she would sneak out into the night to beg the other villagers for help. Unfortunately, not many people would help a Thrall-less.

They were almost upon her. Ramalia stopped and turned around, stifling her terror. This would be for Freescha. She felt like a warrior, taking a stand in a battle. Crazy. How could she face five Wardens, men hand-picked by the Consul, chosen for their powerful Thralls and their strong Thrall-shields?

She had one consoling thought. If the Consul allowed women to be Wardens, Ramalia would be one.

The riders slowed, less out of caution than to avoid running her down. They would be punished for killing her — Ramalia was considered good breeding stock. Women who produced a Thrall-less child were known to beget powerful Thrallers afterward.

“Woman!” their captain Thralled. “Be silent! You are coming with us back to town.”

“Stay where you are!” the tall man to his right Thralled. They dismounted, the other three echoing the captain’s Thrall to add strength.

She allowed the tall man’s Thrall to compel her. It was a trick that Mirtha, her grandmother, taught her — don’t shield a Thrall if you want to obey it anyway. Ramalia hunched down as the Wardens approached, acting as if she were completely in their power.

“Make no Thrall,” one of them commanded.

Ramalia brushed aside the compulsion to obey like a distracting gnat. Her grandmother had pummeled her with Thralls before she could even walk; next to that, the Warden’s Thrall felt puny.

“You are charged with stealing from a citizen of our High Consul’s empire,” the captain informed her, “and you are to be questioned on suspicion of harboring a Thrall-less. You will come with us.”

The captain’s Thrall pounded on her shields — he was powerful. She had to act now.

“Back!” she shouted. Splitting her Thrall between all five men diluted its power, but one of them, a bearded man to her left, staggered back. A weaker one — just what she’d hoped for.

“Leave here and never return,” she told him, Thralling with all her might.

Ramalia resisted their combined attack. She had to defeat them before they forgot their arrogance and simply threw a sack over her head. She wouldn’t be able to focus on one opponent at a time if she couldn’t see.

“Go now,” she intoned, staring at the weak one.

He immediately mounted his horse and fled.

“Submit,” the captain commanded her, apparently not worried by losing one man.

Ramalia grimaced. At least only three Thralls now echoed the captain’s. Their combined attack left her shields battered. Another echo might have crushed her.

She chose her next target, a short, balding man.

“Flee! A bear is coming to kill you!” she told him.

Ramalia hoped the Wardens wouldn’t resort to such tricks — usually they were too prideful to use the tiny boon of making a Thrall sound logical. The man quivered, hesitating.

“There it is!” Ramalia shouted, pointing behind the man.

“Thrall no more,” the captain commanded, stepping closer. The others joined him, echoing. All at once, they were too much for her. Her mouth clamped shut against her will. They closed in around her; there was no point in resisting.

Suddenly, she remembered something her grandmother had told her once: they step closer to loom larger in your mind. A technique to enhance a Thrall’s power. Ramalia closed her eyes, picturing Freescha hiding in the darkness, terrified. She vividly remembered her daughter’s screams on the night that Wardens had dragged away Davon, her husband. Ramalia gathered her will.

“Don’t obey the captain,” she mumbled under her breath,

Her head snapped up. She had almost succumbed. Self-Thralling was another wonderful trick she had learned from her grandmother.

“You shut your own mouth,” she told the captain, meeting his gaze and rising to her feet.

He leaned over her. They were nose to nose.

“You are the one who must be silent,” he replied, echoed by his two fellows.

Her shields strained again, and she felt her knees turn to butter.

“The Consul has pardoned us,” she Thralled weakly. “You are to leave us alone.”

The tall Warden next to the captain flinched but held his ground. She braced herself for their next attack. Her shields were almost gone, but she had one last trick remaining. Ramalia carefully adjusted her grasp on her sack of potatoes.

“Be silent,” the captain Thralled. “Your daughter is with us. Come with us and she will be safe.”

The news slammed her like a hammer’s blow. It couldn’t be! How did they find her? If those monsters had harmed Freescha, she would kill them!

She clamped her lips tightly. The captain was a fool, still Thralling her. Did he think she would resist now that they had Freescha? Ramalia bowed in submission.

Oops. A bunch of potatoes fell from her sack as she bowed. Why was she gripping it so awkwardly? The captain’s eyes followed one of the potatoes as it bounced over his foot.

In the moment of his distraction, Ramalia straightened and hurled the sack of potatoes into his face with all her strength, knocking him to the ground.

“What — ?” he cried, slipping on rolling potatoes as he tried to get to his feet.

Ramalia had invented that trick herself. A Thrall weakened slightly if the Thraller broke his gaze.

“Stay where you are! Speak no more!” Ramalia cried, pouring all of her energy into her Thrall. She targeted the tall one. “You! Leave here immediately! The Consul has need of your great skills elsewhere!”

The tall Warden vaulted into his saddle and galloped away. Only two remained.

“Tell this man you can handle me alone,” she commanded the captain. That was logical enough.

“I can — handle this — ” the captain gritted his teeth and stopped.

The other man departed, obediently leaving the matter to his captain. She stared into his eyes. “You will tell the Consul that you questioned me and my daughter, and found that she simply has strong shields,” Ramalia commanded. Her Thrall sounded feeble, even to herself, but the captain nodded complacently. She’d broken him.

The complete version of “The Thrall” appears in Black Gate 9.

One thought on “Fiction Excerpt: “The Thrall””