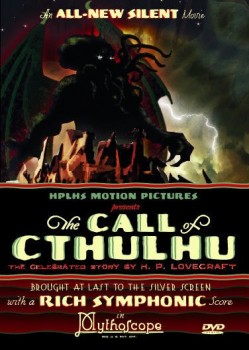 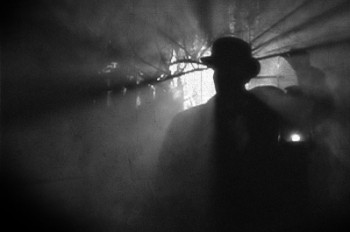 The story, of course, is familiar to fans of Lovecraft, and The Call of Cthulhu sticks very closely to the text during its 47 minute runtime with but a few minor exceptions that I didn’t even notice (I had to look them up). It could even be said that the elements that make ‘The Call of Cthulhu’ itself sort of an unusual short story — the fact that nearly all of it takes place off-stage, as it were, in various journals, newspaper clippings, or stories related by another character — are better suited to film which, after all, can just show us everything that Lovecraft was telling. The protagonist Thurston’s investigations into his great uncle’s files (here cleverly titled to reflect the chapter sections in the original short) give us the opportunity for grand set pieces (the swamp, the ship, R’lyeh) and bring him closer to a madness that is revealed in a clever way at the end. 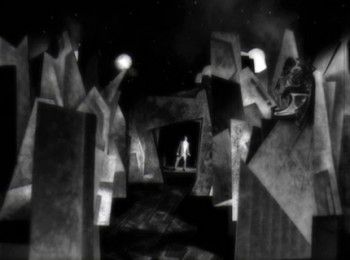 Of course, not everything about Lovecraft is suited to film. Far from it — if anything he may be one of the least filmable writers around relying, as he does, on evoking a feeling of dread and awe as much by what he leaves unsaid as by what he reveals. In our age of seeing the Great Old Ones on the covers of CDs and plush Cthulhu toys at conventions, a lot of the mystery has gone out of things that Lovecraft wisely left to the imagination. Therefore, it should come as no real surprise that when we finally see everybody’s favorite tentacled monstrosity emerge cranky from his long slumber as a stop-motion model the impact is less than the viewer yearns for. Though wisely kept mostly in the shadows at first, the climactic sequence does give us a bit more of a clear look at Cthulhu than I think is strictly wise — and, whether he be a nicely done model as in this film or the very best CGI from a major studio, I still think less is more when cosmic dread is the effect one is shooting for. 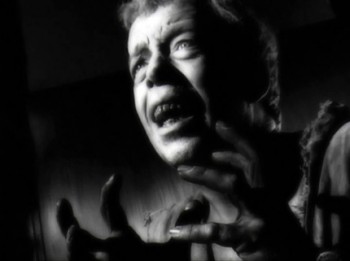 Still, this is a limitation any film is going to come up against, and what The Call of Cthulhu has managed to achieve with its limited resources is nothing short of remarkable (a must-see ‘making of’ special on the DVD entertainingly reveals the backyard sets and ingenious props used in the production). The Louisiana swamp full of cultists is probably the most successful set-piece in the film, in which models, props, green-screen, and clever use of light and dark all come together to create a truly effect scene. Perhaps my biggest disappointment with the look of the movie is again due to budget, and that is it was recorded on digital video, rather than film, which somewhat spoils the illusion of age created by the otherwise spot-on scratches and graininess of the image.

While the movie itself, and many of the filming techniques that went into making it, are intended to evoke a bygone era, the acting, thankfully, is modern and naturalistic. If the producers had tried to recreate an actual 1920s style silent film in all aspects I think the result would have been a parody, not to mention wholly unsuitable to the subject matter. Instead, they wisely keep the human element relatable in the midst of so much else that is unfamiliar. 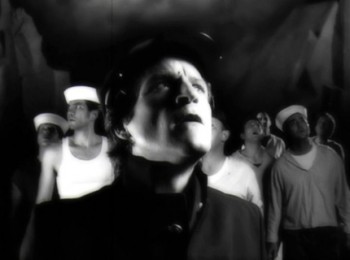 Finally, this film is most definitely made by fans for fans, and I recommend it to anyone who enjoys Lovecraft’s work. I cannot see it having much appeal to the ‘uninitiated,’ however, as I don’t think the The Call of Cthulhu can actually stand effectively on its own apart from the source material. While that might read as a condemnation were this some other film, I think in this case things are exactly as they should be — for this fan-made labor of love is by far the best adaptation of a Lovecraft story that I’ve ever seen and, in its loyalty, it has clearly signaled that it cannot and must not be separated from its source.

[…] title poses a question wisely skirted by the makers of the 2005 release, The Call of Cthulhu, which I’ve just reviewed over at Black Gate. This is a no-budget film made with a lot of ingenuity and passion, and it’s by far the most […]

Next up, a talkie (The Whisperer in Darkness):

And, just for fun, Fishmen