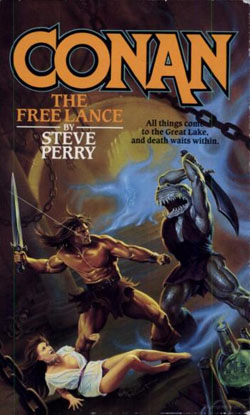 Let’s see … I’ve reviewed a Conan pastiche novel each from Leonard Carpenter and John Maddox Roberts. So next up, Steve Perry.

If there’s one word I would used to describe Steve Perry’s Conan novels, it’s goofy. Perry has a reputation among Conan fandom for overkill and general silliness. He apparently loves high fantasy. Perhaps he loves it too much. His Conan books burst at the seams with fantastic monsters, strange races, and weird magic … and not in an ideal way. Although Perry has an enormous imagination, it gets away from him and creates a world that has almost no resemblance to Robert E. Howard’s Hyborian Age. It’s not so much that these elements are silly, but that they seem so when placed in Howard’s setting. They would work fine in the Star Wars universe — and Perry has written some good Star Wars novels to prove it; I’ll admit I enjoyed his Shadows of the Empire, even if LucasFilm tried shoving it down my throat first. But in the grittier, more-historically centered Hyborian Age, where magic is rare and sinister, Perry’s style feels like someone trying to write a Forbidden Realms novel who accidentally wandered into Robert E. Howard-land.

Conan the Free Lance (yes, two words, not one, according to the actual title page — Conan isn’t picking up occasional assignments for the New Yorker) won’t change anyone’s mind about Perry’s style. The story occurs in an overt wonderland akin to high fantasy. Its villain and the instigator of our plot, Dimma the Mist Mage, lives in fortress on a bed of sargasso weeds in a Karpash Mountains lake. He needs a talisman to restore his body to its solid form, and so he sends his shapeshifting servants the selkies to fetch it from the Tree Folk. Conan, while on his way to Shadizar, rescues Cheen, a medicine woman of the Tree Folk, from the draconian hunting beasts of the reptilian-descended Pili. (Okay, we already have far too many demi-human races running around.) Conan helps the Tree Folk repulse the selkie attack, but the selkie leader Kleg escapes with the talisman—the ‘Seed’ which the Tree Folk need to make their tree homes grow. He also kidnaps Cheen’s young brother, Hok. Conan joins the Tree Folk in the quest to save Hok and recapture the Seed.

Where Perry most obviously jumps the rails of the Hyborian Age is in the assault of bizarre multiple humanoid races and a slew of creatures with odd names (Kralix, skreeches, vrunds, Pilis). These creations push the narrative into territory that will make many Conan readers feel uneasy. Some of the similarities to the Star Wars universe are a bit suspicious: the Tree Folk have an an ‘Ewokian’ patina to them, and a desert pit-beast recalls the Sarlaac from Return of the Jedi. Even if you can accept the non-Hyborian tone of the creatures, Perry does them a disservice with his detailing: neither the selkies nor the Pili come alive as cultures or biologies. The selkies in particular feel underdeveloped and under-described. Perry also has an annoying non-Hyborian approach to the gods. Conan meeting Crom in a dream seems unlikely, and Crom doesn’t match our expectations of him: he acts like a laughing prankster, not the grim god up on his mountain whose attention you really don’t want to draw.

The story fits into the earliest days of Conan’s career, before he reaches any of the civilized kingdoms. Perry wrote a few novels taking place in this ‘gap’ in the old chronologies and makes a few references to them (a rare event for any pastiche to mention another). It’s crowded places like this in the different chronologies that make you see why CPI decided to start with a clean slate in the 2000s. Most of the authors who wrote stories occurring early in Conan’s career never tried for realistic character development for the young Cimmerian. You won’t find the brutish, superstitious youth of “The God in the Bowl” or “The Tower of the Elephant” here (or even the one from de Camp and Carter’s “The Thing in the Crypt” and “The Legions of the Dead”); Conan acts no different here than in the prime of his career.

Making the situation more confounding is that Conan has hardly any reason to be in the story. Early on he wants to rescue the boy Hok, but once he achieves that he has no motivation to help the Tree Folk recover the Seed. He even wonders a few times why he should care. The villainous beauty Thayla’s attempt to slay Conan is just so her husband won’t find out about her dalliance with the barbarian, but Thayla acts much more powerful than her dull husband so you can’t imagine she would worry about upsetting him. Kleg’s attempt to escape from the Kralix feels out of place since Dimma has no particular motivation to sic his monster on Kleg in the first place. A large chunk of the book hangs on tenuous threads and it teeters on the verge of collapse many times. In fact, I would wager that the author crafted the whole plot around a four-way story collision for the finale, but even that flounders, reading like a Keystone Kops routine filled with knee-slapping “irony.” After that, the resolution comes as a complete deus ex machina. That may work for a Greek tragedy playwright, but not for modern fantasy.

One of the elements of the novel that Perry nails down is the evil wizard Dimma and the curse that keeps him in a disembodied mist form. Dimma’s tragedy is a fine dramatic device; the passages about his torment when he briefly regains solidity, only to lose it again, contain some of the best writing in the novel. Perry also tosses in a bit more sexual content with Thayla of the Pili desiring human males for their larger, uhm, equipment. Perry seems to have a predilection for kinky couplings in his books. Previously, in Conan the Defiant, the Cimmerian bedded a zombie woman. Here he does stud service for a reptile queen. What can I say except that it’s … well … different.

Most of Perry’s writing reads smoothly, but he sometimes trips over unwieldy phrases and metaphors that sound unnatural. He also slips in modernisms that jar with the setting. For example: “Not here. Hmmm. Musta dropped it somewheres. Ah, well, no help for it. Probably not worth anything anyways.” Sorry, nobody talks like that in the Hyborian Age.

Perry also structures his novel so that each chapter jumps from subplot to subplot, like a series of fast cuts in a movie. The subplots don’t immediately relate to each other, so this device feels like an artificial way to create a faster pace. It fails in that regard and instead keeps the story disjointed and difficult to read. Perry should let each of the plots unfold in its own chapter before moving to another plot with the next chapter (the style the other pastiche authors frequently use, and the one that Howard applied in The Hour of the Dragon, which features some masterful use of parallel construction). It hurts further that the sections about the selkie Kleg and his flight are uninteresting; Kleg doesn’t qualify as a hero character and his struggles won’t interest anyone. The lengthy tangle of events in the town of Karatas goes on far too long to very little point; it seems like the story just takes a pit stop here.

Despite all these deficiencies, Conan the Free Lance does excel in one arena. It’s brief. Perry does far better in his earlier Conan works, Conan the Fearless and Conan the Defiant, and this novel just goes to prove that even a wagon load of imagination can’t save swerving plots and inconsistent world-building.

Let’s hope this is no one’s introduction to Conan.

You’ve summed up all the issues with this one, I’d say.

This was the first Conan pastiche read that really made me say, “WTF?”

Way too much D&D style stuff going on for Hyboria. “Goofy” is right – and “goofy” is the last term anyone should use to describe Hyboria! (and Crom the jester was bad, too)

Unfortunately, this one sticks in my memory because of everything that was wrong, not right.

As you note, Perry is probably a fine writer on other worlds but he just didn’t understand (or didn’t bother to understand) Hyboria and tried to hammer it into something it wasn’t.

[…] Last week I reviewed a silly Conan pastiche novel. Today, I offer a sequel of sorts: a review of a very silly Hercules movie. The 1983 Hercules, sporting former mean, green, grunting machine Lou “Hulk” Ferrigno and the best special effects the Italian film industry can sort of buy, is one of the grandly awful pieces of entertaining oddness ever to come from a Roman studio. And Rome has given us some odd stuff. Aside from sanitation, medicine, education, wine, public order, irrigation, roads, the fresh water system, and public health, of course. […]

Great that you reviewed this one, or some day I may have bought it. My brother hates the pastiches, but I have enjoyed a few, some more than others. I think there are a whiole slew of people who avoid any non pure Howard Conans like the plague.

Any plans to review any of the otrher pastiche authors?

Definitely, Tiberius! I just have to take breaks between them. I’ve got to tackle at least one Robert Jordan and one Sean Hunter, and… sigh… one Roland Green. Or I might do another John Maddox Roberts because I generally like his. Carpenter can sometimes do good stuff.

[…] high fantasy approach to Conan, which feels more at home in a Star Wars novel or a D&D tie-in. (See my review of Conan the Free Lance for more thoughts about this.) De Camp and Carter diverge into this “anything goes” territory […]