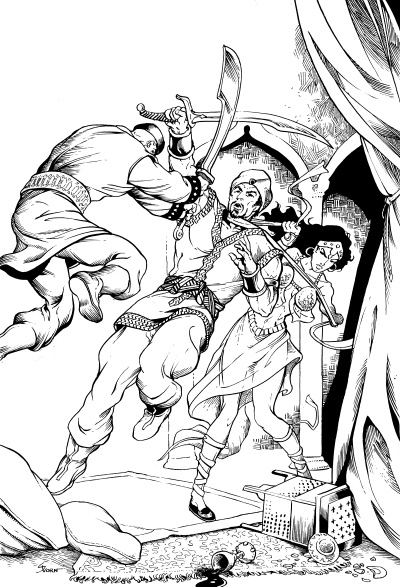 “There.” Fakhir threw back the winding sheet. “Have you ever seen anything like that?”

I had looked on scores of dead men, and at first I saw nothing remarkable about the one who lay upon the table in the guard captain’s office. His arms and legs were bent stiffly in his well-tailored red jubba. His brown beard stretched down his chest, as if he’d sought to make up in length what he lacked in thickness.

When alive he had been a young man of moderately wealthy means, and in the dust speckled light that filtered in from the high narrow windows I did not at first see why my master muttered a curse and reached out to touch the corpse’s face.

And then I stepped closer, and cried out to God.

The corpse had no eyes.

Fakhir reached up with one broad hand and brushed his beard. “What do you think of this, honored one?”

My master said nothing. He removed the emerald from his left hand and set it down near the corpse’s head. Then he probed one of the empty sockets with his fingers. His cool blue eyes narrowed, and the mobile lips above his triangular beard shifted to right and left.

“How did he die?” Dabir did not look up from his inspection.

“We have found no wounds,” Fakhir said.

Dabir pinched his fingers within the corpse’s beard. He raised his hand into one of the sun beams.

“Crumbs.” Dabir raised a tiny dark speck to his nose.

“He was found last evening,” the captain said, “lying beside the wall. He could not have been there long, for the rats have worried only his fingers. And he was hidden beneath old blankets, lest you think birds responsible for the eyes. Is it the work of a ghul?”

Dabir pointed to the rim of the eye socket. “Here a knife was used, to pry out the eye. The incision into the skin was probably unintentional. And here. If a monster did this, it was a human one.”

“But why?” the captain asked. “Who would want eyeballs?”

“Bismallah!” The Captain stared at Dabir. “Surely you are a man of wonders. How did you know there had been other bodies found?”

“Because you would not have spoken of ghuls after one curious death.”

The captain’s head bobbed in agreement, the helm wrapped in his turban flashing briefly in the light. “It is so. Two reports have reached me-of bodies found with missing eyes. Rumors race through the town like rats and it is hard to know which are truth and which are tales, but it is clear that some thing has struck more than once, likely more than these two times.”

“He was a dyer,” Dabir said after inspecting the man’s mangled hands.

Dabir peered into the mouth and prodded about with his finger. “You have the names of those who found these bodies?”

“Indeed, honored one. The first body was mourned last week. I do not think that the family would allow you to examine it now, or that it would be pleasant to do so.”

“My master has explored far more grisly things than this,” I said.

Dabir stepped away and washed his hands in a bowl of rose water Fakhir’s attendant had set aside for him. He replaced his ring.

“Do you not wish to examine him more?”

Dabir shook his head. “No. I assume there was not a coin to be found upon him?”

“No, not a one. You think thievery was the motive?”

“No. This man — have you yet found his family?”

“We have. My men recognized him. He is the son of Abdul, the dyer.”

“You may turn him over to his family now. I will need the names and homes of these victims. I will speak with their relatives. They are not, by chance, related in some fashion?”

“You shall see to the heart of the matter, master,” I said, “and when the time comes, show me where to strike.”

The complete version of “Sight of Vengeance” appears in Black Gate 10.