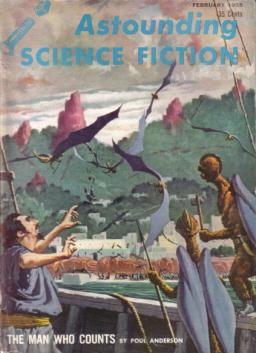 The serials? Murray Leinster’s lighter-than-air The Pirates of Ersatz, Garrett & Harris’s even fluffier “That Sweet Little Old Lady,” Everett B. Cole’s dreary “The Best Made Plans,” and Gordon R. Dickson’s Dorsai!, which rumor has it is popular in some circles but whose rather mystical notion of human evolution was offensively untenable to me even at age 10. 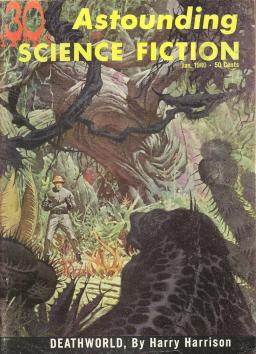 1960 was little better: a more bloated Garrett & Harris psi serial (“Out Like a Light,” and the beginning of an even longer one, “Occasion for Disaster,” and lots and lots of short fiction varying from the perfectly competent down to the trivial and the tediously tendentious.

The next year was not much better, and the magazine never again attained the rarefied heights of 1958. I gave up on it about the time I went off to college in 1966.

This was a matter of great distress to me. I had been quite excited about actually reading the magazine that had become so familiar from the acknowledgements pages of all the anthologies I had read. Why can’t this magazine be as good as it was? I wondered. The other SF magazines were relatively little consolation in 1959 and 1960, especially since I missed the early 1959 issues of F&SF, which were excellent, and anyway a lot in F&SF was a little subtle for my pre-adolescent brain.

This early disappointment warped my world view for some years, since there was very little to be interested in besides SF magazines in the small town where I was immured. (But I am pleased to report that ever since I escaped, existence has been a pleasant surprise, perhaps assisted by the lowering of my expectations at the hands of John W. Campbell.)

This article originally appeared online in a March 2015 listserv post, as part of a longer discussion. Reprinted by permission.

So, John (and sorry I didn’t respond elsewhere, been ridiculously busy), what of Vance’s “Dodkin’s Job”? or the various Anderson stories, including part of ORBIT UNLIMITED? or the Budrys stories? Or “Despoilers of the Golden Empire”? (All these from 1959.)

Actually I quite agree with your overall thesis … and even those mentioned above are none of them their authors’ best works.

Not disputing that by the 60’s Astounding was years past being THE essential SF magazine, but if it published Dune after the bottom fell out, that bottom was pretty damn high.

While I realize they weren’t popular with everyone, I really enjoyed James H. Schmitz’s work, especially the Telzey stories from the 1960s.

Agreed on Schmitz’s work. However, he did not publish that frequently in ASTOUNDING until mid-1961. At that point he became a quite regular contributor. His stories, combined with regular appearances by Poul Anderson, H. Beam Piper, and Frank Herbert, brought ANALOG starting about 1962 up to a higher level of readability than the doldrums of 1959-60. But it never achieved its former level of interest again.

[…] “That first year of Galaxy left us all gasping.” And in his Astounding Science Fiction Testimonial, John Boston generally concurs, saying that 1958 was the last good year under editor John W. […]