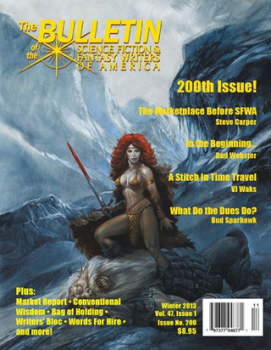 Word of a new controversy inside the hallowed walls of the Science Fiction Writers of America (SFWA) is hardly news — the organization is known for regular rows. Less than a year ago, in fact, we reported that SFWA Bulletin Editor Jean Rabe resigned amidst a controversy over a series of sexist and rather tasteless articles. As a consequence, the membership of SFWA demanded additional oversight of the Bulletin and the new President, Steven Gould, promised the organization’s officers would take a more active role in overseeing production.

Now Tangent Online editor Dave Truesdale (a non-member of SFWA) has circulated a petition taking issue with the planned oversight, citing fears of censorship and excess political correctness. I think. It’s 12 pages long and seriously rambly, and frankly lost me when it started quoting Charlton Heston as “an early civil rights activist” (you can read the original doc here).

Predictably, the petition has struck a chord on both sides of the issue. It has already been signed by Gregory Benford, Robert Silverberg, Barry N. Malzberg, Mike Resnick, Nancy Kress, Gene Wolfe, Jack Dann, Norman Spinrad, and Sheila Finch. Meanwhile, several folks have been speaking up loudly against it — most entertainingly Natalie Luhrs:

It’s full of appeals to the sanctity of the First Amendment – which, as a private organization, SFWA doesn’t need to abide by – and a whacking great heap of sexism and racism, too. I don’t understand why some people are constantly conflating their desire to say anything they want, wherever they want, with private organizations’ right to moderate spaces that they own.

For those who want a slightly more balanced and objective viewpoint (and why would you want that?), I recommend C.C. Finlay’s concise summary of the issue, Editing is not Censorship, posted on Facebook here (with comments) and on his blog here (comments disabled).

After watching the SFWA dissolve into public petty squabbles over the past few years, Ive come to the conclusion that it is populated and run by 5 year olds. And lately it seems that the 5 year olds are giving way to the 2 year olds – as the adults leave the organization or are ostracized by it.

I’m pretty sure I am now SFWA eligible, but frankly, I haven’t bothered to check. Perhaps this underscores why? Possibly this is a failure on my part — not having fully investigated what SFWA sees as its mission, etc., for at least a decade — but I must say, as a veteran of a good many squabbling arts organizations, I cannot see why I would wish to belong to any club with a consistent reputation for infighting.

John, the version of the Bulletin petition you link to was soon after revised and toned down at the suggestion of Nancy Kress. The official final version of the petition went live yesterday at Tangent Online. Many more names have signed on since the early version you’ve linked to. Last night Janis Ian signed, and Vernor Vinge did so this morning.

I found I agreed with his take, yeah. Your mileage may vary, obviously. If you come up with a better summary, by all means let us know.

> I must say, as a veteran of a good many squabbling arts organizations, I cannot see why
> I would wish to belong to any club with a consistent reputation for infighting.

I agree that that constant infighting does make SFWA look like a rather unprofessional professional organization.

But on the other hand, SFWA has done some really important work over the past few years. WRITERS BEWARE is an absolutely irreplaceable resource for new (and even experience writers), and SFWA worked very hard behind the scenes with the recent kerfuffle when Night Shade was sold, to make sure writers were taken care of:

Their work had a very positive impact, as the terms of the final acquisition seemed to work out well for most involved:

Yeah, SFWA has its moments. But it’s still a net positive force in the industry, and deserves recognition for that.

> The official final version of the petition went live yesterday at Tangent Online.

Thanks for the correction. Here’s a link to the latest petition:

Seriously, I can remember when I first started submitting to pro markets I was so excited by the prospect of being in the SFWA, but after a decade of this crap, I am very happy to have never gained ‘inclusion’ into this dysfunctional organization.

Believe it or not, I’d never heard of Writers Beware (see, I knew it had been a while since I investigated SFWA’s pages), so I zipped on over there and took a good look around. That seems like a very good thing, and very thorough, so color me pleased. Ralan.com covers some similar ground with flags/warnings about markets where others have had trouble, but the SFWA covers agencies, too, including my old “friends” at the (so-called) Literary Agency, a scam of epic and apparently ongoing proportions.

Thank you for the tip!

Dave is actually incorrect. There appears to be a second version of the petition with the original language that Nancy Kress did sign off on. It’s up at: http://radishreviews.com/wp-content/uploads/2014/02/Bulletin-Censorship2.pdf This was current as of last Friday, and was confirmed by a number of recipients.

> It wasn’t until this weekend that it significantly changed.

I haven’t kept up with the changes in the doc, to be honest. I understand there are at least two versions, and maybe three, and after that I gave up.

> after a decade of this crap, I am very happy to have never gained ‘inclusion’ into this dysfunctional organization.

> Writers Beware… seems like a very good thing, and very thorough, so color me pleased.

Glad to help! WRITERS BEWARE gets attacked from time to time by scammers they’ve uncovered (the most notorious, of course, being THE WRITE AGENDA, who are so loathsome they actually celebrated when A.C. Crispin, one of the founders of WRITERS BEWARE, died of cancer), so they deserve whatever positive attention we can send their way.

> the SFWA covers agencies, too, including my old “friends” at the (so-called) Literary Agency, a scam of epic and apparently ongoing proportions.

Sounds like you have personal experience. Love to hear the details, if you’re open to sharing.

[…] Black Gate and Amazing Stories also both offer a summary of the controversy. […]

Sean, You’re right but allow me to explain. Very near the beginning, when Nancy signed on, we (the group) decided to go with that early version. I’d begun to send them out, first to people we thought might be interested. Then shortly after I’d begun to email some people Nancy brought up her objections and suggestions, which we eventually took (among others). Thus, you see Nancy’s name on the earlier version. I simply misremembered because Nancy’s suggestions came so quickly after she signed on that I remembered it as her not being on the first version.

Yes, some of the squabbles SFWA has can be exasperating, especially since they are often difficult to keep out of the public eye. However, these fights are the necessary process of turning it into a professional organization that serves all its members and welcomes new ones.

Two recollections about the usefulness of SFWA:

Victoria Strauss of Writer Beware was extremely helpful and kind when my old publisher went under. Drollerie Press was not scamming, but it collapsed spectacularly when its publisher took sick. Strauss helped all the orphaned Drollerie writers work together to get our rights reverted before the publisher was hospitalized for a year and the press went into bankruptcy proceedings. I will always be grateful for Strauss’s service to SFWA.

I was pretty glad John Scalzi got Random House to back off on the abusive terms of its boilerplate contracts for its new e-book imprints. He would not have been able to pull that off had he not been SFWA President at the time.

Life is too short for reading rambling 12-page petitions. I’ve already said all I plan to say about the Bulletin controversy.

> these fights are the necessary process of turning it into a professional organization that serves all its members and welcomes new ones.

You’re probably right. Certainly the squabbles have led to an organization that is much careful about how and what it communicates, and what it fights for.

Still, part of me wishes the organization could make its infighting less public.

> I’ve already said all I plan to say about the Bulletin controversy.

I read your post, and all I can say is: Amen, sister.

I like what Sarah said, and I like how she said it — and now, in the spirit of what she wrote, it’s time to get back to editing my latest project.

In the words of Stan Lee, ‘Nuff said.

John, SFWA does have private spaces for conversations like this but they’re only accessible to members. Truesdale couldn’t have posted his petition there if he’d wanted to for obvious reasons.

Still, of all the responses I’ve seen to this latest kerfuffle (and there have been many), by far the most common seems to be “Squabbles like THIS are precisely why I’m no longer a member of SFWA.”

And that saddens me, as I think the organization still does excellent work on behalf of writers.

[…] week we reported on the most recent public explosion in the ranks of the Science Fiction Writers of America, as Dave […]

[…] can vote. Which they do, when they’re not loudly denying there’s harassment of women writers, or spending all their time actually harassing women writers. Let’s hope the spectacle of the […]

Black Gate » Blog Archive » The Return of the SFWA Bulletin

[…] the problem, the recent petition to project the magazine from perceived censorship and the evils of political correctness put the […]