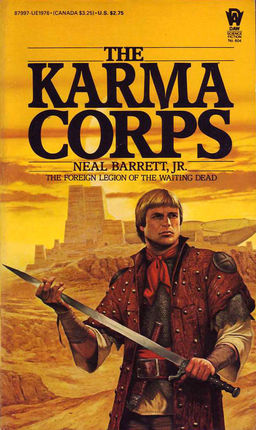 Last month, I bought a small collection of fantasy novels that included Mark Frost’s The List of 7, a terrific Clark Ashton Smith paperback, some vintage Lovecraft — and four early fantasy novels by Texas author Neal Barrett, Jr. I was especially curious about the Barrett, all four volumes in his Aldair series, published between 1976 and 1982. I first encountered Barrett in the late 80s with his post-apocalyptic novel, Through Darkest America (1987), and then his gonzo magic realist offering from Ziesing Books, The Hereafter Gang (1991). Those were more than enough to win my respect for Barrett’s gifted imagination, but I wasn’t familiar with his earlier work.

The four Aldair books rekindled my interest and I set off in search of what else I might find. The first title I found was The Karma Corps, an unusual science fantasy of demons, holy warriors, and a distant space colony with a very serious problem.

Captain Lars Haggart was a soul waiting to be reborn… but before that blessed event he has been inducted into the Arm of God Regiment fighting for the beleaguered Churchers on a newly colonized planet. Their foe — demons who could pop into existence, slay and pop out of existence the next instant. The demons were winning that war, sending their Unborn opponents back to limbo, driving the living colonists toward extermination.

But this was no fantasy, no business of the religious imagination. The fight was real, blood was blood, and swords cut sharp, for the Unborn were very much alive. Haggart was aware that this was frighteningly contradictory but first he had to fight the demons on their own terms — learn how to appear behind their lines and do to them what they were doing to the humans.

An unusual science fiction novel of a space colony in deepest trouble and of aliens who knew planetary secrets that were never in anyone’s Holy Book.

Given what I know of Neal Barrett, Jr. already, I didn’t really expect to find his name on a novel of space colonization. Throw in a strange religion and demons who defy our notion of reality, however, and now you’re talking.

The Karma Corps was published in November 1984 by DAW Books. It is 239 pages, originally priced at $2.75 in paperback. The paperback is out of print, but it is currently available in digital format for $3.99. I bought a used copy on eBay for $1.95.

[…] and 1982, and his 1984 science fantasy The Karma Corps, which we covered in a Vintage Treasures piece just a few short months ago. His later books included Through Darkest America (1987), Pink Vodka […]